The now annual lighting this week of a giant menorah in front of the White House symbolizes not only the power grab made by Jewish Supremacists over the United States, but also their controlled mass media’s deliberate suppression of the facts around Hanukah. 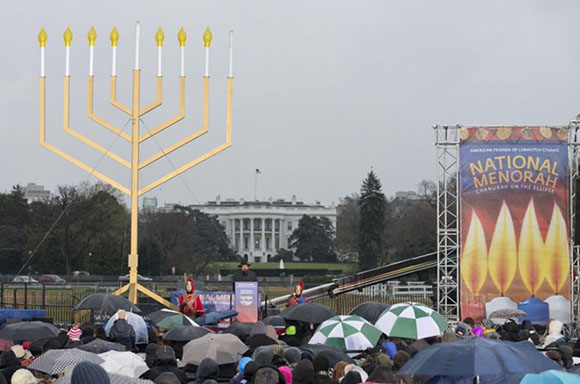 The Jewish Supremacists who control the mass media like to pretend that Hanukkah is simply some sort of Jewish version of Christmas.

Hanukkah is actually a celebration of Jewish racism, Jewish supremacy and Jewish separatism. It commemorates the radical Jewish Maccabees mass murder of Greeks and Syrians as well as Jews who dared to assimilate and be tolerant of one another. It is actually a Jewish religious and historical symbol of Jewish dedication to non-Assimilation with non-Jews!

The celebrated even concerns the the Maccabean Revolt against the Macedonian-ruled Seleucid Empire of the 2nd century BC.

Seleucid Empire king Antiochus IV Epiphanes (c. 215 BC – 164 BC), having experienced trouble with the Hebrews within his empire’s borders, mistakenly thought that fully accepting Jews into Greek institutions and promoting marriage and assimilation between Greeks and Jews would help prevent the terrorism and violence of Jewish radical sects. Actually the Greek willingness to assimilate and willingness of many Jews to assimilate only inflamed the Jewish radicals even more.

Some Jews went along with this assimilation process, but many extremists among that community—some sources say the majority—opposed it.

offer offer a sacrifice to an idol.

Mattathias’ son Judah Maccabee then gathered together a Jewish army and, after a protracted terrorist campaign, was victorious over first the Hellenized Jews and then Seleucid forces.

After the Maccabees entered Jerusalem in triumph and ritually cleansed the Temple, they re-established traditional Jewish worship there. According to the story, the victorious Maccabees could only find a small jug of oil that enough to sustain the lit Menorah for one day, but it lasted for eight days, by which time further oil could be procured—hence the lighting ceremony of the menorah which forms a major processional part of the celebration.

A large Seleucid army was sent to quash the revolt, but returned to Syria on the death of Antiochus IV. Its commander Lysias, preoccupied with internal Seleucid affairs, agreed to a political compromise that restored religious freedom and the dispute ended.

The important point here is that the festival of Hanukah actually celebrates Jewish separatism and a victorious Jewish campaign against assimilation—not a season of gifts or goodwill, as the media pretends.

The lighting of the menorah in front of the White House in actual fact is celebrating the halting of intermarriage and assimilation.

Imagine for a second any religion publicly celebrating its desire to be spate—and then getting the White House to endorse it!

At the same time, the Jewish Supremacists who publicly celebrate their separateness in this way, are the forefront of telling everyone else to integrate.

Next Post Exposing the Real Racists: A Review of Dr Duke’s “Jewish Supremacism”