Dr. Duke & Don Advo on Zio-Weinstein’s Perversions — Who Could Have Ever Guessed?

Today Dr. Duke reviewed an article from the Jewish magazine Tablet, which asserted that Harvey Weinstein’s perversions were specifically Jewish and should not be confused with the womanizing and sexual power abuse of people like Bill Clinton and Bill O’Reilly. The difference, according to the Jewish author Mark Oppenheimer, is that Weinstein was not motivated just by sexual libido, but by an ethnic hatred of the goyim, whom he sought to humiliate by defiling their women. 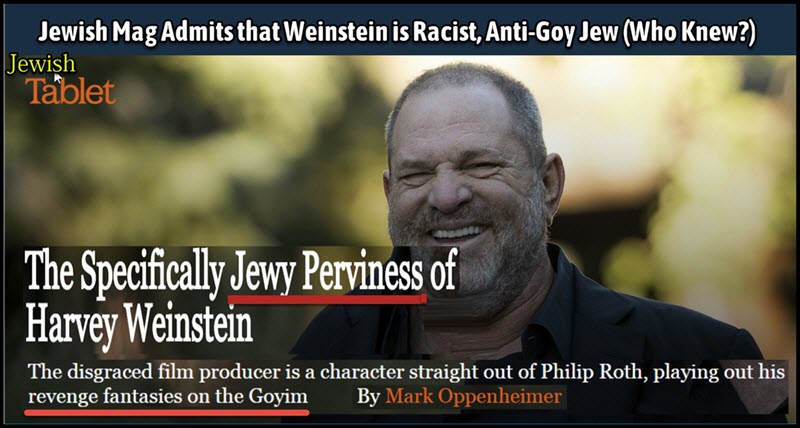 Of course, if Dr. Duke were to say such a thing himself it would be considered antisemitism, but Oppenheimer, writing in a Jewish magazine for an intended Jewish audience, freely admits such a thing. Dr. Slattery pointed out that this anti-goyim hatred and the desire to humiliate the goyim is not unique to the Jews of Hollywood, but can be seen among the Jewish moguls of finance, academia, the news media, and politics.

This is another lively show filled with information. Please share this show widely.

Next Post Dr. Duke & Dr. Joyce of UK Prove Weinstein is the Jewish Rule NOT the Exception and Why Only the Warrior Spirit Can Save Our People!