By Dr. J. Williams Phd. A fascinating insight into how Jewish Supremacists attempt to guard the gates of scientific debate on race has come with the new book, A Troublesome Inheritance, by well-known science journalist, Nicholas Wade. 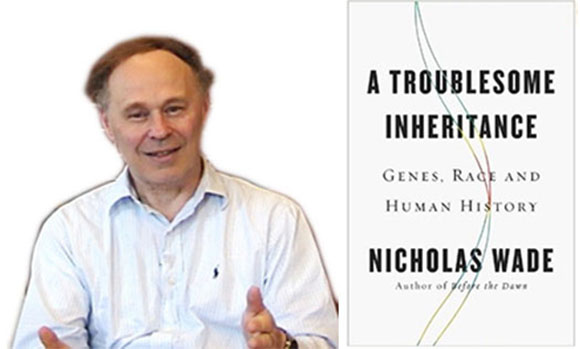 The book, launched on May 6 this year, sprang to prominence with an article promoting the work published in Time magazine, written by Wade, titled “What Science Says About Race and Genetics.”

(Wade is, by the way, a former science editor of the New York Times who retired two years ago, and there is no truth to the internet-based rumor that he was “sacked” after writing his latest book). 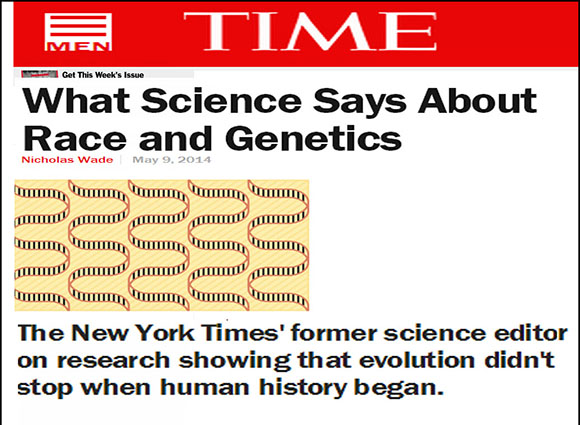 In the article—which is largely a summary of some of the salient points of his new book—Wade admits what Dr. David Duke and many others have long maintained—that there is indeed a biological basis to race—and that the existence of these differences should not in any way be used to denigrate any individual or make any assessment as to their “moral worth.”

All people, as Dr. Duke has repeatedly said, have an equal right to freedom, liberty, life—and the right to maintain their own identity without domination or oppression by any other people.

In his article, Wade echoes Dr. Duke in this way:

“A longstanding orthodoxy among social scientists holds that human races are a social construct and have no biological basis.

“In the decade since the decoding of the human genome, a growing wealth of data has made clear that these two positions, never at all likely to begin with, are simply incorrect.

“There is indeed a biological basis for race.”

He uses the ability of modern DNA testing to prove this fact, pointing out:

“An illustration of the point is the fact that with mixed race populations, such as African Americans, geneticists can now track along an individual’s genome, and assign each segment to an African or European ancestor, an exercise that would be impossible if race did not have some basis in biological reality.”

Wade then goes on to echo Dr. Duke once again on the moral issue around race:

“Racism and discrimination are wrong as a matter of principle, not of science.”

He then goes on to detail how science has shown that the process of natural selection over the last 50,000 years “created” the differences we now see as racial groups, each adapted to the needs of their continent and geographical living space.

Having conclusively established these facts, Wade moves on to discuss the heritability of psychological differences, focussing in particular upon the social nature of humans, and, controversially for him, how genes affect “traits like skin color and nutritional metabolism, but also some aspects of brain function.”

“Though the role of these selected brain genes is not yet understood, the obvious truth is that genes affecting the brain are just as much subject to natural selection as any other category of gene,” he writes.

By mentioning this topic, Wade makes his first foray into battle against Jewish Supremacists, even though he doesn’t realize it.

In his book, he lines up the arguments put forward by the chief protagonists of the “race is a myth” dogma—and proceeds to shoot their theories to shreds.

Jewish Origin of “No Such Thing as Race” Theory

However, what Wade doesn’t mention—although he must know—is that all of the protagonists he mentions—Franz Boas, Jared Diamond, Stephen Jay Gould, Ashley Montagu, and Richard Lewontin—are all well-known Jewish Supremacists, and some of them Jewish Communists as well.

Without mentioning that it is this small clique of Jewish Supremacists who have foisted this deliberate lie upon academia and the world, Wade specifically criticizes them for putting ideology ahead of evidence. In other words, although he doesn’t say it outright, in essence he accuses them of deliberately lying.

The fact that they are all Jewish Supremacists, is, of course, of great significance—particularly given that group’s ongoing and blatant hypocrisy over race and DNA. For example, one of Wade’s targets—Jared Diamond—is best known for insisting that race doesn’t exist, but is also on record as boasting that DNA has finally been able to scientifically define who is a Jew which will be a boost to Israel!

In the last part of his book and his article, Wade then moves on to try and address the issue of intellectual differences between races. Obviously, Wade is acutely aware of the fact that the Jewish Supremacist racists will seize upon this aspect to attack him—and it is here where the “gatekeepers’ hands” can be clearly seen.

In an attempt to explain cognitive differences in a manner which will not lead to him being pilloried, Wade uses two examples which he knows will not raise Jewish Supremacist ire: the claim that Ashkenazim Jews and certain groups of Chinese have higher cognitive abilities than other people. 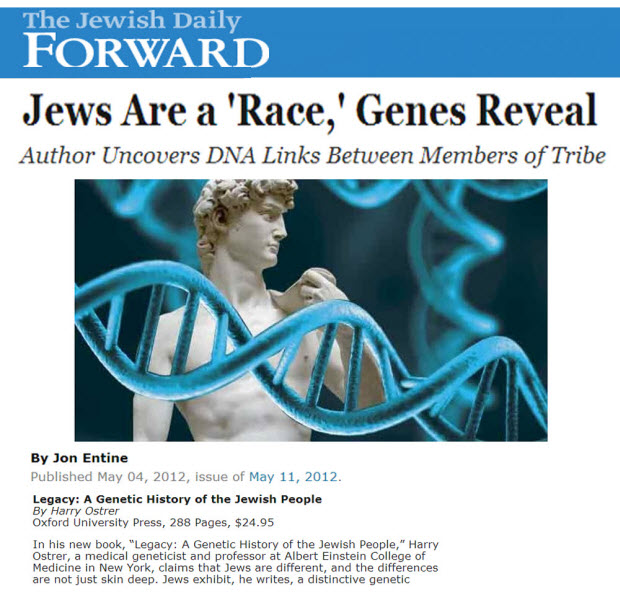 Wade obviously feels—with a degree of correctness—that anyone who talks about Jewish “intellectual superiority” should be safe from attack, as the Jewish Supremacist controlled media bosses love to read about how they supposedly have a higher IQ than anyone else.

What Wade ignores, however, is that, going by purely religious group definitions, Episcopalians actually have an average higher IQ than Ashkenazim Jews—even using the obviously flawed definition of “religion” as a dividing line.

This uncomfortable fact aside, Wade refuses to touch the fact that Sephardic Jews have a much lower average IQ than Europeans (Israel’s average IQ is 94), and only tries to explain Ashkenazim Jewry’s “superior status” by hauling out the long-debunked claims that they have won “so many Nobel prizes” despite being such a tiny element of the world’s population.

As explained in detail by Jan C Biro MD., PhD, of the Karolinska Institute, Stockholm, Sweden & Homulus Foundation, Los Angeles, CA, USA, in his paper “The Jewish Bias of the Nobel Prize,” that that “extensive and well-organized personal networking of a marketing type among Jewish scientists, together with the egalitarian-liberal, nonchalant attitude of the Swedish representatives of the Donor, are responsible for this unfortunate phenomenon.”

Biro shows that Jews have only, mysteriously, started to win Nobel prizes in any significant number after the Second World War.

“This change is often described as the “inflation” of the Prize. It is explained by the acceleration of research and the fact that most scientific work is done by teams today, which makes it unfair to honor only one person. Research redundancy–parallel research and problem solving–is also a contributing factor. Jewish-Gentile Prize sharing grew from a shy ~2.7% to a bold ~24.6% (~9-fold increase). About 10% of Prizes have remained ‘Jewish only’ but the proportion of ‘Gentile only’ Prizes decreased as ‘J-G shared’ Prizes became more frequent.”

An example of the fact that Nobel Prizes are in many ways divorced from merit, is that only one prize a year is awarded in any major field. For instance, one recipient for medicine when there are hundreds of thousands of incredible medical achievements and breakthroughs every year, thousands in each of all the different areas of medicine. So is one picked?

It is picked by two areas, promotion by fellows in academia, and media attention and accolade.

The only way that one can win among the hundreds of thousands of deserving candidates is the right connections and promotion—money, media, and academic backing to select just one out of all them to be awarded a prize. Jewish tribalism plays a huge role.

Wade is far too intelligent not to know that his use of Nobel prizes to “prove” Ashkenazim Jewish intelligence is deceptive.

however. he surely does know that the only way he can get the truthful notions of race and biology out to the public, via his publisher and Time magazine, is to make the obligatory bow to alleged Jewish superiority.

If he had dared used the Episcopalians, for example, as an example for high IQ, Wade knew he would probably never had his book accepted for publication, or been able to write an article on it for Time magazine.

The astute reader will also note that nowhere in the Time magazine article does Wade dare to discuss any of the deep differences between races—except in a manner in which he can “put down” Europeans in any way possible.

A good example of this comes with his discussion of the genetic roots of behavior, and tribalism in particular. He discusses at length why tribalism among Iraqis or Afghans is so deep-rooted, and also how (European) racism was also created the same way.

Tribalism and Racism is “Inherited” Wade insists, but he doesn’t dare mention the elephant in the room: Jewish ultra-racist tribalism.

Wade completely ignores the most ultra-racist tribalist community on earth: the Jewish Supremacists as typified by Israel and Jewish structures and organizations all over the world.

Israel is without question the most racist state on earth, having laws forbidding intermarriage with non-Jews, which is actually genetically based far more than religiously rooted. It radically suppresses non-Jewish immigration, social segregation, and promotes a state religion which spews hatred against non-Jews—but in spite of all of that, Wade simply refuses to even mention Jewish racism in his discussion of group behavior.

There are therefore, two important lessons to be learned from Wades’ new book:

1. That modern science has conclusively proven the biological basis and reality of race; and

2. That even now, any attempt to discuss this topic with the minimum of criticism can only be done by adapting the presentation to include an obligatory bow to Jewish Supremacists—who still guard the gate on all mass-media based discussion on science and race.

Finally, it worth quoting Wade himself from his book:

“Whether or not a thesis might be politically incendiary should have no bearing on the estimate of its scientific validity.”

It is interesting to see mainstream science now saying things almost identical to things said openly and courageously by Dr. David Duke for decades. He writes about the underlying biological foundations of race in his masterpiece: My Awakening.

Viewpoints for which Dr. Duke has been relentlessly vilified for years are now being admitted by the leading scientific minds of the 21st Century. == Dr. Williams