Top secret US Intelligence briefings—leaked to the Newsweek magazine—have revealed that the Jewish Supremacist state of Israel engages in wholesale, wanton theft and espionage against America on a vast scale. 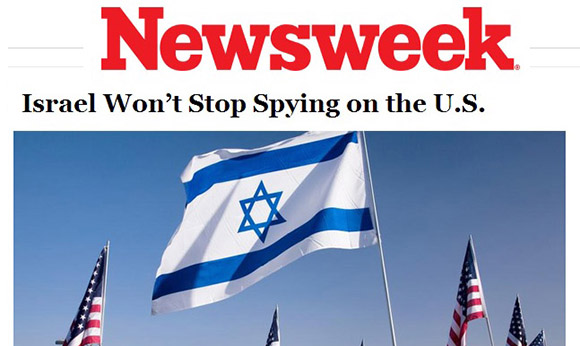 The article, titled “Israel Won’t Stop Spying on the U.S.” was published by Newsweek magazine, and, appropriately enough, starts off with the sentence:

“Whatever happened to honor among thieves?”

It then goes on to reveal that:

“Israel’s espionage activities in America are unrivaled and unseemly, counterspies have told members of the House Judiciary and Foreign Affairs committees, going far beyond activities by other close allies, such as Germany, France, the U.K. and Japan.

“A congressional staffer familiar with a briefing last January called the testimony ‘very sobering . . . alarming . . . even terrifying.’ Another staffer called it ‘damaging.’

The secret briefings were held, the article reveals, after moves in the US Congress to allow Israel to enter the US’s “visa waiver program” whereby citizens of select nations can enter America without first having to apply for a visa.

Currently, Israel is not a member of the Visa Waiver “club.” Before now, it has always been claimed that the reason for this is because Israel does not allow American nationals visa-free entry to Israel. Such a reciprocity arrangement is a critical element of membership of the Visa Waiver community.

However, the intelligence briefings make it clear that the real reason for the US State Department’s reluctance to allow Israel to join the visa waiver group is because of rampant Israeli espionage against America.

“According to classified briefings on legislation that would lower visa restrictions on Israeli citizens, Jerusalem’s efforts to steal U.S. secrets under the cover of trade missions and joint defense technology contracts have ‘crossed red lines,’” the article states.

“‘No other country close to the United States continues to cross the line on espionage like the Israelis do,’ said a former congressional staffer who attended another classified briefing in late 2013, one of several in recent months given by officials from the Department of Homeland Security (DHS), the State Department, the FBI and the National Counterintelligence Directorate.

“The intelligence agencies didn’t go into specifics, the former aide said, but cited ‘industrial espionage—folks coming over here on trade missions or with Israeli companies working in collaboration with American companies, [or] intelligence operatives being run directly by the government, which I assume meant out of the [Israeli] Embassy.’”

The level of espionage is, according to the article, unprecedented.

“The level of Israeli espionage here now has rankled U.S. counterspies. ‘I don’t think anyone was surprised by these revelations,’ the former aide said. ‘But when you step back and hear that there are no other countries taking advantage of our security relationship the way the Israelis are for espionage purposes, it is quite shocking. I mean, it shouldn’t be lost on anyone that after all the hand-wringing over [Jonathan] Pollard, it’s still going on.’”

The article also brazenly reveals that the Jewish Supremacists also rely on their internal tribalists within the US Government to protect them, thereby inadvertently revealing the treasonous nature of the Jewish lobby in Washington DC:

“I.C. Smith, a former top FBI counterintelligence specialist during the Pollard affair, tells Newsweek, ‘In the early 1980s, dealing with the Israelis was, for those assigned that area, extremely frustrating.

“‘The Israelis were supremely confident that they had the clout, especially on the Hill, to basically get [away] with just about anything. This was the time of the Criteria Country List—later changed to the National Security Threat List—and I found it incredible that Taiwan and Vietnam, for instance, were on [it], when neither country had conducted activities that remotely approached the Pollard case, and neither had a history of, or a comparable capability to conduct, such activities.’”

The article also quotes its Congressional aide sources in this regard:

“‘But what I find really funny is they haven’t done s**t to get into the program. They think that their friends in Congress can get them in, and that’s not the case. Congress can lower one or two of the barriers, but they can’t just legislate the Israelis in.’”

The path to visa waivers runs through DHS and can take years to navigate and requires all sorts of procedures. Requirements include enhanced law enforcement and security-related data sharing with the United States; timely reporting of lost and stolen passports; and the maintenance of high counterterrorism, law enforcement, border control, aviation and document security standards.

As the Newsweek article pointed out:

“Israel is not even close to meeting those standards, a congressional aide said. “You’ve got to have machine-readable passports in place—the e-passports with a data chip in them. The Israelis have only just started to issue them to diplomats and senior officials and so forth, and that probably won’t be rolled out to the rest of their population for another 10 years.’”

The Newsweek article then concludes:

“But U.S. counterspies will get the final word. And since Israel is as likely to stop spying here as it is to give up matzo for Passover, the visa barriers are likely to stay up.”

“As Paul Pillar, the CIA’s former national intelligence officer for the Near East and South Asia, told Newsweek, old habits are hard to break: Zionists were dispatching spies to America before there even was an Israel, to gather money and materials for the cause and later the fledgling state. Key components for Israel’s nuclear bombs were clandestinely obtained here. ‘They’ve found creative and inventive ways,’ Pillar said, to get what they want.

“‘If we give them free rein to send people over here, how are we going to stop that?” the former congressional aide asked. ‘They’re incredibly aggressive. They’re aggressive in all aspects of their relationship with the United States. Why would their intelligence relationship with us be any different?’

Lessons from These Revelations

There are a number of important lessons to be learned from these revelations as published in Newsweek:

1. Israel is, and always has been, spying and stealing from America, an unmitigated theft which has been carrying on unpunished for decades.

2. The Israelis rely on and use fellow Jewish Supremacists inside America to support their activities, and are confident that their single-loyalty brethren inside the US Government will protect them.

3. The Jewish Supremacists are so confident about their ability to protect themselves that they even think they can force legislation through the US Congress which does not require them to meet even the most basic demands of joining the US Visa Waiver program.

4. An indication of the power of the Jewish Supremacist lobby in Washington DC is illustrated by the fact that these US Intelligence briefings were done in top secret to dozens of US Congressmen—but none have even dared mention the proven wholesale treason against America in public.

5. Even these press reports, which are so dramatic that they can’t be completely suppressed, don’t really go far enough. In actual fact, Israel has committed terrorism against the United States. In the Lavon Affair, the Israelis made terrorist bombing attacks against American installations in a false flag operation to lure America into a catastrophic war against Egypt. After Israeli agents were caught red-handed the Israeli government admitted that it was behind the attacks.

In 1967, Israel made a murderous attack on the USS Liberty, in which 34 Americans were killed on a clearly marked American intelligence ship in international waters. The Chairman of the Joint Chiefs of Staff, Thomas Moorer, and the US Secretary of State at the time, Dean Rusk, both said that the Israeli attack was a deliberate planned attack on the ship.

How in the world does the Zio-media get away with calling Israel an ally when it commits terrorism against the United States?

Zionist Treason is ruling the United States of America.

6. An interesting issue worthy of discussion is why Newsweek, which has a tradition of being one of the most slavishly pro-Jewish Supremacist publications in the American media, would even publish such an article so hostile to Zionist interests.

The reason is simple: Newsweek magazine went bankrupt a while ago, and ceased publication. It was bought up by the Jewish media mogul Sidney Harman, and then merged with the news website The Daily Beast, to form the The Newsweek Daily Beast Company. In August 2013, Newsweek was once again sold to a new company, IBT Media, owned by two non-Jewish people, Jonathan Davis and Etienne Uzac.

The new Newsweek, therefore, is, for the first time in its existence, not directly under the control of the Jewish Supremacist media moguls, and, for the first time obviously feels freer to publish an article such as the one mentioned above—supported by the fact that it was written by a Jewish journalist (the only ones who can actually talk openly about Jewish power without being attacked by the Jewish lobby).

The new Newsweek is therefore a valuable lesson in how the power of the internet is succeeding in breaking up the Jewish lobby’s previous death grip on news information.

Next Post Jews, Race, and Nicholas Wade: How Jewish Supremacism Attempts to Guard the Gates of Science