The existence of Jewish tribalist racism is once again on display at the highest levels of the Israeli government, this time with that country’s Finance Minister openly declaring his opposition to Jews mixing with non-Jews.

Minister Yair Lapid—significantly one of Israel’s most prominent secular political figures—has definitively declared his opposition to what the Times of Israel called “intermarriage and assimilation” between Jews and non-Jews. 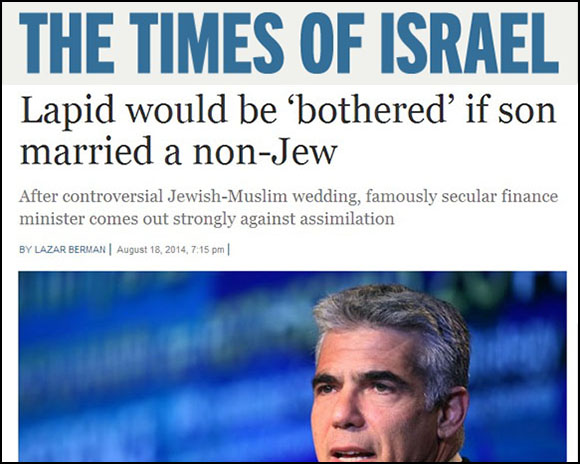 The outburst followed an uproar in Israel after a recent marriage between a Jewish woman convert to Islam who married a Palestinian.

The racist outpouring in Israel over that marriage—which saw police deployed to stop Jews attacking the wedding party—and the anti-Gentile comments from public figures—has of course been completely covered up by the Jewish Supremacist-controlled media which is directed at the Goyim in the West.

Imagine, however, what that same media’s reaction would be if any non-Jewish senior government figure in any other country had declared their opposition to mixing with Jews—that media would be screaming “racist” and every other epithet known. But because it is a fellow Jewish Supremacist making the remarks, the Zio-media simply pretends it never happened.

Lapid made his remarks on Galei Israel radio, saying “It bothers me, I admit. I say that if tomorrow my son came to me and said, ‘Dad, I want you to meet Rona, not Rina, and she’s Russian Orthodox or Catholic and we’re getting married and the kids won’t be Jewish’ — would that bother me? It would bother me greatly. I think that the Jewish people is small, I think we have a tradition, I think it needs to be protected, and it bothers me.”

The wedding in question—a rarity in Israel—saw bride Morel Malka, 23, marry Mahmoud Mansour, 26, of Jaffa, after she converted to Islam. This was the only way that they could be legally married in Israel, as that country’s laws completely forbid Jews from marrying non-Jews.

By converting to Islam, the bride could sidestep this law and be legally married according to Muslim tradition.

Even though she had converted to Islam, the Jewish extremists were still besides themselves with hate over the fact that a racial Jew had broken ranks. The groom was even forced to go to court to get an order restricting protestors not to come within 200 meters—nearly 700 feet—of the wedding, in an attempt to stop violence.

Hundreds of enraged Jews descended on the wedding venue in Jaffa to protest and scream insults. Police were deployed at the wedding, and even so, at least four enraged Jews were arrested for breaking the court order and trying to rush the wedding party.

The Times of Israel, which carried reports on the incident—unlike the Jewish Supremacist controlled media aimed at the Goyim—did not describe the protesting Jews as “racists” (as they would undoubtedly have done if the roles had been reversed) but only as “anti-assimilation protestors.”

Imagine the names which the Jewish Supremacist media would have for Gentile organizations devoted to preventing Gentiles from mixing with Jews!  Every name in the book, and shadows of the Holocaust© would be used day and night in their coverage of any such group…

According to the Times of Israel, the “Lehava anti-assimilation group, whose Hebrew initials stand for ‘Preventing Assimilation in the Holy Land,’” published the wedding invitation of the two recent newlyweds on their Facebook page and invited hundreds of people to come to protest the wedding with “banners and bullhorns.”

Lehava director Bentzi Gopstein accused the bride of “marrying the enemy while the nation is at war.”

Yad L’achim also published the wedding invitation on their website, and were supported by thousands of Jews from all over the world in their comments section who objected to the union.

Readers would also do well to ponder a final point: If Judaism was “just a religion” as its proponents always claim, why then would religious and secular Jews in Israel and from around the globe, object to a convert to Islam marrying a Muslim?

The outpouring of hate—from the most senior level down, and from religious to non-religious Jews—shows that Judaism is not just a “religion,” but actually a blood-based tribal identity.