Most damaging spy in US history is freed and Israel’s treachery is rewarded!

Jonathan Pollard, the man that prosecutors and Defense Secretary Casper Weinberger said was “the most damaging spy in U.S. history,” will be released today after intense Jewish lobby pressure. The move is an apparent quid pro quo for the Iran nuclear deal, which, despite the protests of hardline war hawks like Netanyahu, was itself done for Israel.

Here is the quotes from a Los Angeles Times from November 20 ,2015. 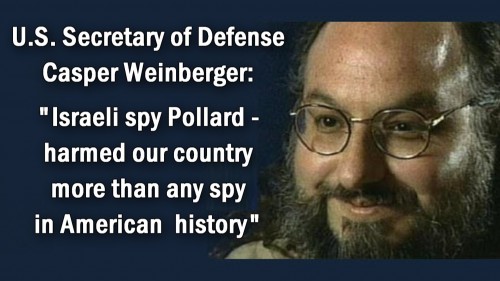 Even though the focus has been on Pollard he was sent by Israel to spy on America and the greatest damage to America came from Israel’s giving the information to the Soviet Union which caused the wiping out of much of America’s Communist spy network and the murder of hundreds of American operatives.

Pollard’s release was not opposed by the Justice Department last summer, much to the disappointment of a bipartisan coalition of the country’s national security elite, who have long argued that he had severely damaged U.S. interests..

.. Initially, Israel denied any official connection to Pollard, but it was quickly revealed that the operatives for whom he was working reported to an intelligence advisor to then-Prime Minister Shimon Peres…

…U.S. intelligence analysts said that he did it for cash, and that spies for the U.S. in the Soviet Union were discovered and probably killed because of Pollard’s actions.

“It is my belief, and the intelligence community was of the nearly certain belief, that assets [agents working for the U.S. overseas] were compromised,” said Joseph diGenova, who prosecuted Pollard.

DiGenova said Pollard passed the Israelis thousands of documents that had nothing to do with Israel’s enemies, including technical information about U.S. information systems and satellites, photographs, maps and classified manuals…

“It was a gigantic amount of information and stuff of the highest top-secret code word classification,” DiGenova said. He said that Israel bartered the information to the Soviet Union…compromising agents who quickly disappeared…

Israel did not officially acknowledge that Pollard was its spy until 1998, by which time the country’s failure to support him and fight for his release had became a political issue.

The fact that Israel could spy on America, steal its top secret intelligence information, and give it to America’s worst enemy at the time causing the death of hundreds of American operatives– and get away with it —  is mind-boggling.

In fact, not only did Israel not get bombed for this, or at least suffer sanctions and economic boycott, but continued to receive billions of dollars of weapons of mass destruction and cash, is proof of the absolute Zio treason and tyranny that runs both the government and media in America!

The ADL often says that dual Jewish dual loyalty is a lie, when in fact, it is not dual loyalty but singular loyalty to Israel and not America. It is illustrated by the uncensored writings of Dr. Steven Steinlight, former National Affairs chief of the largest Jewish organization in America, the American Jewish Committee. Here are his words

I’ll confess it, at least, like thousands of other typical Jewish kids of my generation, I was reared as a Jewish nationalist, even a quasi-separatist. Every summer for two months for 10 formative years during my childhood and adolescence I attended Jewish summer camp. There, each morning, I saluted a foreign flag, dressed in a uniform reflecting its colors, sang a foreign national anthem, learned a foreign language, learned foreign folk songs and dances, and was taught that Israel was the true homeland. Emigration to Israel was considered the highest virtue, and, like many other Jewish teens of my generation, I spent two summers working in Israel on a collective farm while I contemplated that possibility. More tacitly and subconsciously, I was taught the superiority of my people to the gentiles who had oppressed us. We were taught to view non-Jews as untrustworthy outsiders, people from whom sudden gusts of hatred might be anticipated, people less sensitive, intelligent, and moral than ourselves. We were also taught that the lesson of our dark history is that we could rely on no one…