Jewish Supremacists around the globe are pulling out all stops in an effort to halt the truth emerging about their control of the US Congress and their attempts to sabotage any sort of deal with their current arch-enemy, Iran.

The latest example of their frantic efforts has been evidenced by a campaign to censor the influential Economist magazine, which dared to publish a cartoon showing Barack Obama with his ankle shackled to a Judaized seal of the US Congress, thereby prevented from shaking hands with Iran’s President Rouhani.

The cartoon initially appeared to accompany an article titled “A big gap to close” which claimed that the chances of reaching any permanent peace deal with Iran was small.

The article, therefore, was anything but pro-Iranian—but this was not what upset the Jewish Supremacists. The cartoon was what really got them upset.

Long-time hypocritical racist and Jewish Supremacist Abe Foxman from the ADL (which specializes in continually accusing everyone else of racism but ignores Israel’s racist Jews-only DNA-based immigration policies, Palestinian ethnic cleansing and so on) demanded that the Economist withdraw the cartoon—which the magazine promptly did.

Below can be seen screen shots of the Economist article before and after the censorship, showing how the cartoon was removed and replaced with a photograph. 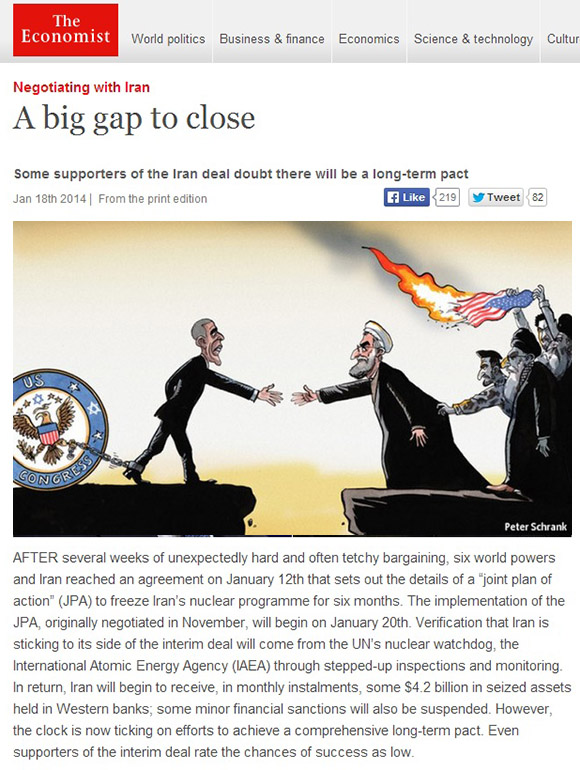 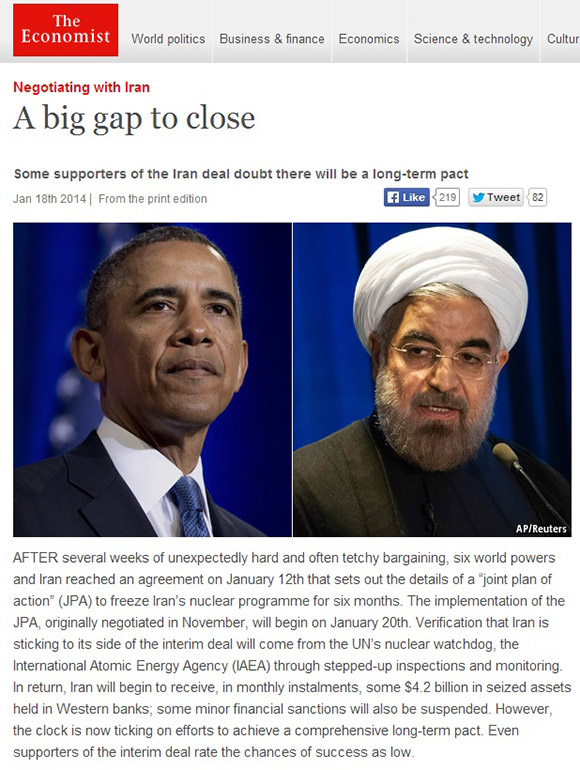 Ironically, the very complaint made by the Jewish Supremacists (in Foxman’s words: “…the offensive nature of the cartoon [which] explains to readers why this image implying Jewish control was so outrageous” is proven by the censorship and, of course, the Jewish Lobby’s open manoeuvring in the US Congress.

Firstly, if there was no “Jewish control”, the perfectly accurate cartoon would not have been censored in the first place; and secondly, the American Israel Public Affairs Committee (AIPAC) is very public and open about its attempts to push through the “Nuclear Free Iran Act” in Congress, which will effectively sink any attempts to reach a deal with Iran.

AIPAC has even published its own list of US Congressmen who support the Jewish Supremacist-sponsored bill—so there can be no doubt or question where the proposed legislation originates from.

But even though the Jewish Supremacists can boast to each other about how well they manipulate the US Congress, they don’t like it when the hated goyim dare to notice this as well—much less publish articles or cartoons about it.

The censoring of the Economist article serves to illustrate the point well: Jewish Supremacists can and do influence what goes out in the media, even in publications they do not directly control, and can and do directly influence legislation in the US Congress.

The Economist has been censored for simply pointing out the truth—and the truth a feared enemy of Jewish Supremacism.

Next Post US, Israel aim to divide and conquer Middle East