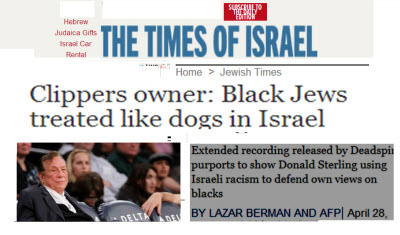 The Times of Israel Headline about Jewish Clipper owner Donald Sperling says it all. It is headline that would be verboten in the American mainstream media.

In actual tape recording he says:

DS: It’s the world! You go to Israel, the blacks are just treated like dogs.

V: So do you have to treat them like that too?

DS: The white Jews, there’s white Jews and black Jews, do you understand?

V: And are the black Jews less than the white Jews?

V: And is that right?

DS: It isn’t a question—we don’t evaluate what’s right and wrong, we live in a society. We live in a culture. We have to live within that culture.

V: But shouldn’t we take a stand for what’s wrong? And be the change and the difference?

DS: I don’t want to change the culture, because I can’t. It’s too big and too [unknown].

Of course, everything he says about Israel and how it treats its “Black Jews” is true. The Ethiopian Jews are a pariah in Israel. But, Americans and the rest of the world hears very little about the Jewish racial supremacist policies of Israel.

And the truth is that the “Black Jews” are treated light-years better than the Palestinians and other non-Jews in Israel. Of course none of that is mentioned in the article. And of course, Sperling would never had said anything about Israel treating Blacks “like dogs” if he knew the tape would be made public.

In fact, Israel is a segregated state, with thousands of segregated schools, settlements, neighborhoods and apartment building. Chief rabbis and public officials tell Israelis publicly that it is immoral for a Jew to sell or rent to a non-Jew in a Jewish neighborhood.

Israel has ethnic based immigration laws and even bans marriages between Jews and non-Jews, something that would be condemned to the heavens if any European populated nation did the same.

Occasionally the truth ekes out. It is important than when it does we take it far beyond the insulated Jewish community. — David Duke

Next Post The Kosher Food Racket: The Hidden Jewish Tax on Your Food!