The Jewish Supremacists who direct America’s foreign policy have once again stepped up their pressure to incite the US government to attack Iran, this time with a high-level Jewish delegation to the White House sent solely to discuss the issue. 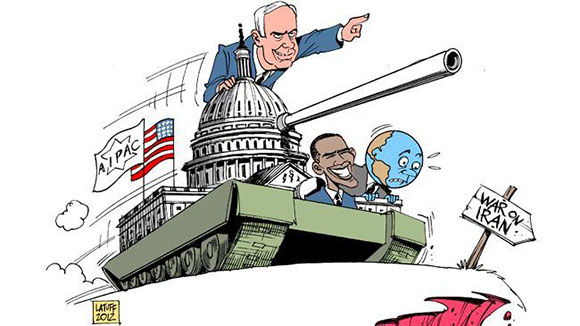 In a statement issued following the meeting, Conference of Presidents Chairman Robert Sugarman and Executive Vice Chairman Malcolm Hoenlein said that the “off the record meeting” dealt with “issues of the highest priority for the U.S., for our community and for America’s allies – halting Iran’s nuclear weapons program.”

The statement went to note that the two sides “agreed to continue the consultation to enhance the prospect of achieving a transparent and effective diplomatic resolution.”

The Jewish leaders also welcomed “the reaffirmation of the President’s commitment to prevent Iran from attaining nuclear capability and that all options remain viable to assure that end.”

In addition to Sugarman, Hoenlein and Foxman, other participants included former Conference Chairman Alan Solow, who is close to President Obama and the White House, as well as AIPAC leader Howard Kohr and Jason Isaacson, Director of Governmental and International Affairs at the American Jewish Committee.

Participants refused to divulge details of the meeting, though one described it as “an open discussion” and Foxman said it was meant to be a “tour d’horizon of what the Administration has done, what it is doing and what it plans to do in the future” in connection with Iran’s nuclear ambitions.

The meeting has revealed Jewish Supremacist hypocrisy on a number of levels:

Firstly, the reality remains that Israel is the only state in the Middle East with nuclear weapons which is in open breach of international regulations on nuclear power—but there are no “sanctions” or “threats of war” against the Zionist state.

Secondly, the Jewish Supremacists claim that they are “just a religious group” and not a race or a nation—but somehow the US government does not see fit to hold high level meetings with Catholics, Lutherans, Presbyterians or Muslims on Iran’s nuclear program and US foreign policy.

The reality remains: There will never be peace until the power of the Jewish Supremacist lobby over US foreign policy is broken.

Previous Post Why is it So Easy to Obtain FBI Files on Soviet spies, But Impossible for Israel’s Spies?

Next Post Arafat Confirmed Poisoned: Who Else Could Have Done it but the Israelis?