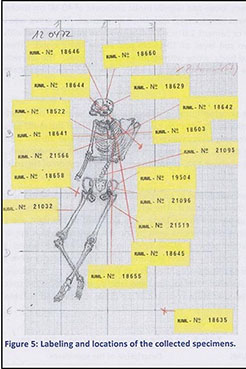 he news from a Swiss laboratory that scientists have found at least 18 times the normal levels of radioactive element polonium in the late Palestinian leader Yasser Arafat’s bones has clearly shown that he was murdered—and the only possible suspects in the case with the motive and the ability could be the Israelis.

Ariel Sharon, Israeli prime minister in 2004, viewed Arafat as a “terrorist” and called his death “a turning point in Middle Eastern history.”

According to reports, Swiss scientists who conducted tests on samples taken from Yasser Arafat’s body have found at least 18 times the normal levels of radioactive polonium in his remains.

The scientists said they were confident up to an 83 percent level that the late Palestinian leader was poisoned with it, a conclusion that they said “moderately supports” polonium as the cause of his death.

A 108-page report (PDF) by the University Centre of Legal Medicine in Lausanne, which was obtained exclusively by Al Jazeera, found unnaturally high levels of polonium in Arafat’s ribs and pelvis, and in soil stained with his decaying organs.

The Swiss scientists, along with French and Russian teams, obtained the samples last November after Arafat’s body was exhumed from a mausoleum in Ramallah in the occupied West Bank.

Dave Barclay, a U.K. forensic scientist and retired detective, told Al Jazeera that with these results he was wholly convinced that Arafat was murdered.

“Yasser Arafat died of polonium poisoning,” he said. “We found the smoking gun that caused his death. The level of polonium in Yasser Arafat’s rib … is about 900 millibecquerels,” Barclay said. “That is either 18 or 36 times the average, depending on the literature.”

The Swiss report examined only the question of what killed Arafat. It did not address or point toward who killed him or how.

However, the Israelis are the only ones with the motive and the ability to have committed the murder.

By October 2004,  Arafat had been holed up for more than two years in his Ramallah presidential compound, which Israeli troops had surrounded and partly razed. 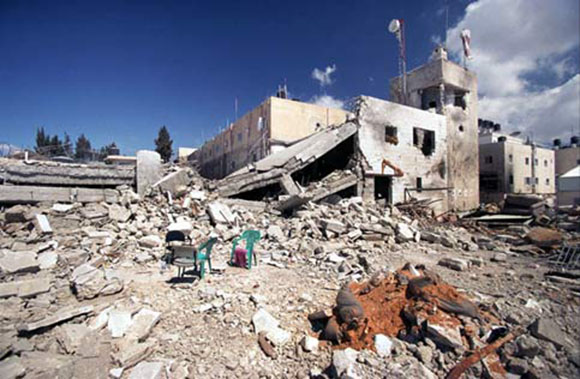 He was elderly and frail, but his medical reports show he was “in good overall health and did not have any particular risk factors,” the Swiss report states.

On the evening of Oct. 12, Arafat suddenly fell ill after eating a meal. Based on his symptoms — nausea, vomiting and abdominal pain — his personal physician initially diagnosed flu.

But his health deteriorated swiftly, and Egyptian and Tunisian doctors flown in to see him could not pinpoint the source of his sickness.

On Oct. 29, a wan and weak Arafat was carried in a wheelchair from his headquarters. He waved and blew kisses to a waiting crowd and was put aboard a helicopter and taken to Jordan. From there, a French government plane carried him to Paris for emergency treatment at Percy military hospital.

French doctors were unable to diagnose or halt his decline, and he soon lapsed into a coma. On Nov. 11, Arafat, who symbolized the fight for Palestinian statehood, died at the age of 75.

By 2011, when Al Jazeera began an investigation, Arafat’s death was a cold case. During the investigation, his wife Suha Arafat gave the network access to her late husband’s full medical records and a bag of his belongings, including clothing he wore during his final days.

Tests conducted by the Swiss scientists who issued the new report found elevated levels of polonium-210, one of the element’s isotopes, in blood, sweat and urine stains on Arafat’s clothes. 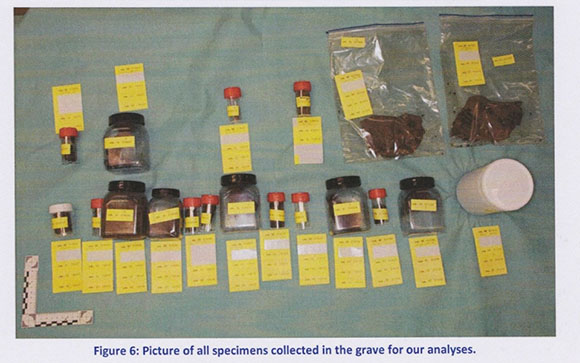 In July 2012, Al Jazeera broadcast the results of its investigation in “What Killed Arafat?” The documentary triggered a French murder investigation and led to the exhumation of the leader’s remains. Sixty samples of his body tissue were taken, and 20 each distributed to the Swiss team; a French team of judges and forensic experts assigned to the murder investigation; and a Russian group invited at the request of the Palestinian Authority.

Polonium is a soft, silvery-gray metal found in uranium ore. The isotope polonium-210 emits highly radioactive alpha particles, but they travel no more than a few centimeters in air and are “stopped by a sheet of paper or by the dead layer of outer skin on our bodies,” according to the International Atomic Energy Agency.

For that reason polonium-210 is not a risk to human health as long as it remains outside the body. But a dose of 0.1 microgram — the size of a speck of dust weighing less than a millionth of a snowflake — would be fatal if it were ingested in food or liquids or inhaled in contaminated air.

Polonium-210 is extremely rare and would be difficult to obtain without the help of a government or access to a nuclear reactor. It also requires considerable scientific know-how to handle in a safe manner, as it can only be manufactured by bombarding the isotope bismuth-209 with neutrons in a nuclear reactor.