The Jerusalem Post has just released its annual list of the “world’s 50 most influential Jews”—rated, that newspaper says, on their ability to “work tirelessly for the improvement of humanity.”

However, the list does not actually seem to include anybody who has done that much “for the improvement of humanity”—and consists of a collection of Jewish Supremacists whose influence has been so baneful as to have been taken from the pages of the Protocols of the Learned Elders of Zion. 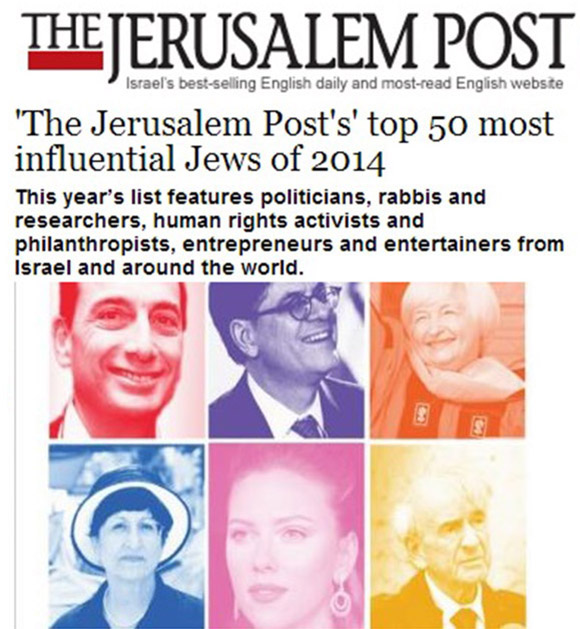 The subtitle of the Jerusalem Post article would cause one to expect a listing great Jews who have benefited the world, instead the list is indeed composed of the “most influential Jews on Earth” but not what the beneficiaries of mankind the article suggests.

In true form the most prestigious newspaper in Israel listing of the 50 most influential Jews in the world is a rogues gallery of Jewish extremists, ultra-racists and supremacists, including a good number of Israeli murderers, and fellow Jewish Zionist warmongers from across the world.

If the Jerusalem Post wanted to prove the Protocols, they could not have assembled a better list. The number 1 spot—the “most influential Jew in the world, they claim, is taken by Jack Lew. This is how the Jerusalem Post describes him:

JACK LEW is the most powerful Jew in the US administration, the world’s top superpower, the Jewish newspaper boasts.

Formerly President Barack Obama’s chief of staff, his current post of secretary of the Treasury puts him in one of the key jobs in the executive cabinet: proctoring economic recovery, forecasting future debt, and managing a complex infrastructure of international sanctions. The Treasury, not the Pentagon, would be responsible for the weapon of choice used by Obama against a nuclear Iran, and Lew has been central in shaping the policy.

Controlling the purse strings of the US Treasury, Lew’s proximity to the president, the most powerful person on the planet, is indisputable.

Last year, when Obama appointed Lew as his chief of staff, he said, “If there was a Hall of Fame for budget directors, then Jack Lew surely would have earned a place for his service in that role under president Clinton.”

The number 2 spot on theJerusalem Post’s list is, and no surprises here, Janet Yellen, the Jewish Supremacist head of the Federal Reserve bank (the same one who has just sworn onto the Fed Board an Israeli citizen who will be appointed as her deputy). The Jerusalem Post glowingly reveals why Yellen has made the number 2 spot:

She was voted No. 2 on Forbes’s list of The World’s 100 Most Powerful Women this year.

Dominated by American Jews over the last 50 years – at least five chairmen have been practicing members of the faith – the position is now held by “one of the nation’s foremost economists and policy makers,” according to US President Barack Obama.

Her position has often been described as the most powerful position in the nation aside from that of president.

Before taking on this new role on February 3, 2014, Yellen held the second-highest position on the Federal Board of Governors, vice chair, from 2010 to 2014. Yellen simultaneously began a 14-year term as a member of the Federal Reserve Board that will expire on January 31, 2024.

Numbers 3 and 4 on the list are Israeli prime minister and president Binyamin Netanyahu and Shimon Peres—both of whom could quite justifiably be accused of treason to America through their now well-documented involvement in the theft of nuclear technology and material from America.

It is hard to see how either of these two war mongers have actually “improved humanity” in any way—unless, in the twisted worldview of Zionist Supremacism, the phosphorus bombing of children in Gaza counts as a “humanitarian act.”

Fifth on the list is Jewish Supremacist political manipulator Sydney Adelson—who is most famous for pumping millions into election campaigns of those politicians who put Israel first.

Once again, the “humanity” of someone who makes his living out of a gambling enterprise (which would, by the way, be illegal in Israel, the country he loves so much) is dubious, to say the least.

Number 8 on the list is Adina Bar-Shalom—who is the daughter of the late Rabbi Ovadia Yosef, one of the most virulent anti-Gentile hatemongers in the Jewish religious world, who was most famous for saying that all Gentiles are donkeys whose only function, as ordained by God, was to work for Jews. The humanity of it all is overwhelming…

Numbers 6, 7, 9 and 10 on the list are Israeli politicians—including the virulent racist and now Israeli minister Avigdor Liberman, while the number 11 spot is taken by Elie Wiesel, a so-called “Holocaust survivor” who Noam Chomsky has called “one of the major frauds of our time.”

Number 12 on the list is President of the World Jewish Congress Ronald Lauder—another arch Jewish Supremacist and fanatic supported of Benjamin Netanyahu, particularly with regard to the never-ending catalog of lies over Iran’s mythical “atom bomb.”

Number 14 is, also no surprise: Stanley Fischer, the soon to be vice-chair of the “American” Federal Reserve Bank. The Jerusalem Post describes him this way:

ISRAELIS JUST love Stanley Fisher. Perhaps it’s his mild manner, his wise demeanor or the slow meticulousness in which he speaks his accented Hebrew. Fischer was voted Central Bank Governor of the Year in 2010. Yet even since his departure from Israel, he has continued to make waves.

The former MIT professor, who mentored future central bankers including former United States Federal Reserve chairman Ben Bernanke and European Central Bank President Mario Draghi, has not fallen off the map since his departure from the Bank of Israel.

Quite the opposite. His international stature has only grown as US President Barack Obama nominated him as vice chairman of the Federal Reserve Bank.

Number 20 on the list is the supposed atheist—but somehow still Jewish—leader of Britain’s Labour Party, Ed Miliband. The Jerusalem Post says this about Milliband:

LONDON BORN Edward Samuel Miliband, known as Ed, has positioned himself as someone who could become next British premier after the scheduled May 2015 general election.

Thereafter follows a long list of people who Gilad Atzmon has even described as a “catalogue of Jewish war criminals, financiers, gambling tycoons, ethnic cleanser advocates, a Holocaust fraudster, [and] a few Rabbis with minimal importance even within the Jewish world.”

It is ironic that if someone had to draw up a list of Jews based on the predictions of the Protocols of Zion, they would find an overwhelming similarity between that choice of names and those put out by the Jerusalem Post.

A remarkable coincidence, if ever there was one…