The attack by two Palestinians on a synagogue in Jerusalem in which four orthodox Jews were killed, is not a random act but rather the sad consequence of Zionist terrorism committed against the Palestinian people over a period of decades.

As tragic as the recent killings are—and we here at DavidDuke.com condemn all bloodshed, no matter who commits them—the reality is that they were the work of people driven to extremism and violence by the behavior of Jewish Supremacists.

The huge coverage of the attack in Jerusalem has made worldwide front pages news—but the Jewish Supremacist-controlled mass media will censor out the reasons why such a terrible act has occurred.
In addition, they will not mention the almost daily acts of terrorism committed by the Zionists against the Palestinians. 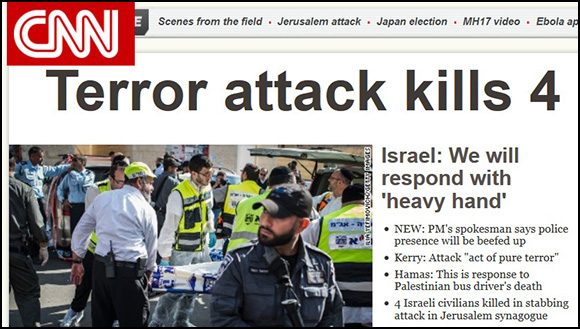 The history of violence in Palestine is as old as the Zionist movement. Prior to the decision by the World Zionist Congress in 1897, Jews and Palestinians lived alongside each other in Palestine in relative peace.

The Palestinians, although subjects of the Ottoman Empire, regarded themselves as a nation in their own right, and had no particular argument with the small Jewish and Christian communities in their land.

However, the launch of the Zionist movement, which was a new manifestation of Jewish Supremacism, changed this relationship. Suddenly, the full weight of international Jewish organizations was brought to bear in the Jewish colonization of Palestine.

From the late 1890s onwards, increasing numbers of Jews were brought to Palestine, legally and illegally, by the Zionist movement. Each new wave of Jewish settlers resulted in the displacement of the Palestinian population—and when the latter protested, the Zionists turned to naked terrorism to drive their enemies away.

After Palestine came under British rule at the end of the First World War, the Zionists increased their violence against the Palestinians to push ahead with their plan to seize Palestine.

The British, sympathetic to Zionism and to the plight of the Palestinians, attempted to strike a balance—but the unreasonableness and violence of the Jewish Supremacists forced their hand, and soon a state of war existed between the Zionists and the British mandate authority in Palestine.

During this period—from 1920 to 1948—Zionist terrorists carried out attacks through groups such as the Irgun, the Lehi (also known as the Stern gang), the Haganah and the Palmach. Their victims were the British authorities and Palestinians alike, all with the aim of driving both those groups out of Palestine.

For example, the “Nebi Musa” riots broke out in 1920 after gangs of Zionists attacked Muslims during the Muslim celebration of that name in Jerusalem (as reported in The Times of April 8, 1920).

In 1929, the so-called “Palestine Riots,” also known as the “Western Wall Uprising,” or the “1929 Massacres” took place, when clashes broke out after Zionists started erecting segregated prayer facilities at the “Western Wall” in Jerusalem to separate themselves from the Palestinians. These constructions violated the until-then observed rule that not Muslims, Christians or Jews would build any structure in Jerusalem which interfered with any group’s access to the holy sites in the city.

Hundreds of people on both sides were killed, and many more injured—most of the latter wounds being inflicted by the British authorities attempting to restore order.

By the mid 1930s, it was clear to the Palestinian leadership that unless something drastic was done, the rate of Jewish colonization of Palestine would inevitably—and soon—result in the extinction of the Palestinian people.

After suffering decades of Zionist terror, some Palestinians started fighting back in 1936—and this signaled a dramatic upturn in the violence.

In the 11 years leading up to the creation of the state of Israel in Palestine in 1948, Zionist extremists who lived in the territory of Palestine under the British Mandate used terrorism as a military strategy to accelerate the establishment of an independent Jewish state.

Their violence was directed against the British authorities who governed Palestine and against the Palestinian indigenous population throughout Palestine.

Over 5,000 Palestinians and dozens of British military personnel in the Zio-terror attacks of that time.

The Irgun was one of the main Jewish terrorist organizations, and their attacks included:

• Al-Quds massacre, December 1937: Member of the Irgun hurled a hand grenade at the marketplace near al-Quds mosque, killing and injuring dozens.

• Balad El-Sheik Village Attack, June 1939: This Palestinian village was attacked by members of the Haganah, the Main Jewish Defense. Five villagers were kidnapped and murdered.

• King David Hotel Bombing, July 1946: Led by Menachem Begin, the Irgun planned and carried out the bombing of the King David Hotel, the British military headquarters in Jerusalem in July 1946 in order to destroy documents proving the terrorist campaigns of Zionist groups. The attack killed 28 Britons, 17 Jews, 41 Palestinians and 5 others for a total of 91 victims. 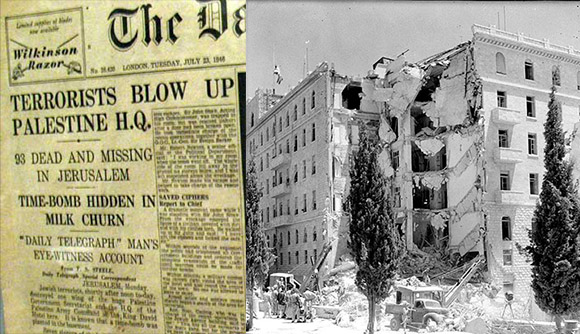 During World War II, some Zionist terrorist groups called a temporary halt in their terror campaign against the British, but continued it against the Palestinians.

Some of the Zionist terrorist groups—such as Lehi—even continued attacking the British, and famously offered, in writing, to fight on Germany’s side as late as 1941 if the Hitler government would agree to recognize a Jewish state in Palestine (the offer was turned down by the National Socialist rulers of Germany).

The Lehi committed the following acts of terrorism:

• Assassination of Lord Moyne, November 1944: Assassinated in Cairo, Egypt, Lord Moyne was the highest ranking British government representative in the Middle East at the time. The Lehi targeted him because of his support for a Middle Eastern Arab Federation. 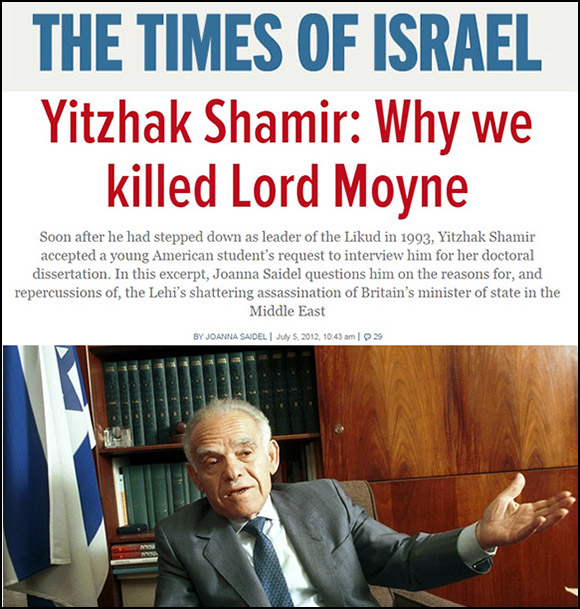 • Deir Yassin Massacre, April 1948: Commandos of Lehi and Irgun headed by Menachim Begin attacked Deir Yassin, a village of 700 Palestinians, ultimately killing between 100 and 120 villagers.5 The Master Mind behind the Deir Yassin massacre, Begin justified the attack in his book The Revolt: “Arabs throughout the country, induced to believe wild tales of ‘Irgun butchery, ’were seized with limitless panic and started to flee for their lives. This mass flight soon developed into a maddened, uncontrollable stampede.”

• Assassination of Count Folke Bernadotte, September, 1948: Count Bernadotte, a UN Peace mediator who had come to the Middle East 1948 to modify the Palestine partition plan in an effort to resolve Arab-Jewish disputes, was also assassinated by the group.

• On 12 December, Irgun placed a car bomb opposite the Damascus Gate, killing 20 people.

• During the night between January 5 and 6, 1948, the Haganah bombed the Semiramis Hotel in Jerusalem, killing 24 people.

• On January 7, 1948, Irgun members in a stolen police van rolled a barrel bomb into a large group of civilians who were waiting for a bus by the Jaffa Gate, killing around 16.

• On February 28, 1948, the Palmah organized a bombing attack against a garage at Haifa, killing 30 people.

After the establishment of the state of Israel, these terrorists were incorporated into the Jewish state. Menachem Begin transformed the Irgun into a political party called Herut. The Lehi became the Moledet party which today continues to openly advocate the ethnic cleansing of Palestinians from the West Bank and Gaza, territories now occupied by Israel.

The record of the Zionist state since then, with regard to its treatment of the Palestinian people is well known. Repeated acts of terrorism, violence, ethnic cleansing, racist discrimination and expulsions have marked the decades since 1948, with the latest “Operation Protective Edge” which killed thousands of Palestinian civilians, women and children alike.

The best summary one can have for the continued loss of Palestinian land due to Zionist terrorism can however been seen in this map, which shows Palestinian territory in green, marked from 1947 to the present day. 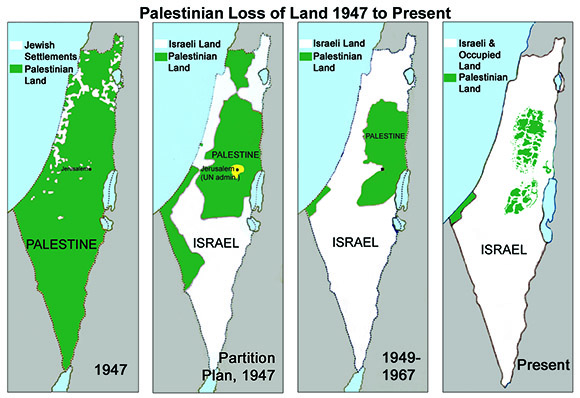 The attitude of Jewish Surpemacists to their enemies in the Middle East is not limited to Palestine.

Who can forget former Secretary of State and Jewish Supremacist Madeleine Albright who said that 500,000 dead Iraqi Children was “worth it”…..she went on to win the Presidential Medal of Freedom from Obama.

Only when the full history of violence and bloodshed—as committed by the Zionists against the Palestinians—is understood, can the recent actions of a handful of extremists in Jerusalem be explained. The sad deaths in Jerusalem are the consequences of decades of Zionist terrorism coming home to roost.