Commentary by Dr. Patrick Slattery — The article below originally appeared in the Israeli major daily newspaper Haaretz and was reprinted in the Jewish Daily Forward. Don’t count on it being picked on in the mainstream Ziomedia, as the goyim aren’t supposed to know about, or at least think about, Jewish racism.

By contrast, Jews, for the most part, are well aware of the racism that is rampant in their community, and yet hardly a Jewish soul will speak out against it. And when a Gilad Atzmon or Paul Eisen do speak out, they are vilified and ostracized by the Jewish community.

For any who think that Dr. Duke has been exaggerating when he refers to Jewish racism as the greatest racism, please read the following article, written by a Jew for a mainstream Israeli and Jewish audience. — ps

The Jewish Supremacist strategy remains one of continually condemning everyone else as “racist”–when in fact the worst, most virulent form of racist behavior is to be found in Jewish communities and Israel. 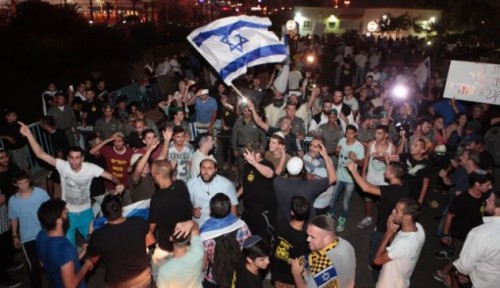 (Haaretz) — “For me, personally, Arabs are something I can’t look at and can’t stand,” a 10th-grade girl from a high school in the central part of the country says in abominable Hebrew. “I am tremendously racist. I come from a racist home. If I get the chance in the army to shoot one of them, I won’t think twice. I’m ready to kill someone with my hands, and it’s an Arab. In my education I learned that … their education is to be terrorists, and there is no belief in them. I live in an area of Arabs, and every day I see these Ishmaelites, who pass by the [bus] station and whistle. I wish them death.”

The student’s comments appear in a chapter devoted to ethnicity and racism among youth from a forthcoming book, “Scenes from School Life” (in Hebrew) by Idan Yaron and Yoram Harpaz. The book is based on anthropological observations made by Dr. Yaron, a sociologist, over the course of three years in a six-year, secular high school in the Israeli heartland – “the most average school we could find,” says Harpaz, a professor of education.

The book is nothing short of a page-turner, especially now, following the overt displays of racism and hatred of the Other that have been revealed in the country in the past month or so. Maybe “revealed” isn’t the right word, as it suggests surprise at the intensity of the phenomenon. But Yaron’s descriptions of what he saw at the school show that such hatred is a basic everyday element among youth, and a key component of their identity. Yaron portrays the hatred without rose-colored glasses or any attempt to present it as a sign of social “unity.” What he observed is unfiltered hatred. One conclusion that arises from the text is how little the education system is able – or wants – to deal with the racism problem.

Next Post Gaza, Israel, War Crimes and How the Jewish Lobby Manipulates the US Government