A total of over 2,100 civilians have been killed and and the UN estimates that  over 75 percent have been women and children, with at least 500 children killed and 3,000 wounded or maimed.

In spite of these obvious war crimes, the Zio-controlled US Government has refused to even consider sanctions of any sort against the Jews-only state—on strong contrast to their censure, sanctions and threats against the Russian Federation over the ongoing debacle in the Ukraine.

The disparity in U.S. government reaction to the two situations highlights precisely how the Jewish Lobby continues to have a stranglehold over American foreign policy—and of how this policy is always distorted in favor of the racist tribalist state of Israel.

An recent article by independent investigative journalist and winner of the 2012 Gellhorn Prize for journalism, Gareth Porter, on the ISPS News service highlighted the American government’s deviousness with regard to Israeli war crimes:

“The Barack Obama administration’s public posture during the war signaled to Israel that it would not be held accountable for such violations.

“A review of the transcripts of daily press briefings by the State Department during the Israeli attack shows that the Obama administration refused to condemn Israeli attacks on civilian targets in the first three weeks of the war.”

The article started off by pointing out that “U.S. officials were well aware of Israel’s history of rejecting any distinction between military and civilian targets in previous wars in Lebanon and Gaza” and showed how that during the 2006 Israeli War in Lebanon, Israeli Defense Force (IDF)  spokesman Jacob Dalal had told the Associated Press that eliminating Hezbollah as a terrorist institution required hitting all Hezbollah institutions, including “grassroots institutions that breed more followers”.

During Israel’s “Operation Cast Lead” in December 2008 and January 2009, the IDF had shelled a school in the Jabaliya refugee camp, killing 42 civilians. The IDF’s justification had been that it was responding to mortar fire from the building, but officials of the United Nations Relief Works Agency (UNRWA) who ran the school had denied that claim.

“Given that history, Obama administration policy makers knew that Israel would certainly resort to similar targeting in its Gaza operation unless it believed it would suffer serious consequences for doing so,” the ISPS article continued.

“But the administration’s public stance in daily briefings in the early days of the war suggested little or no concern about Israeli violations of the laws of war.”

The specific incidents were then listed in chronological order:

* On July 10, State Department spokesperson Jan Psaki was asked in the daily briefing whether the administration was trying to stop the Israeli bombardment of Gaza, as well as the firing of rockets by Hamas.

Psaki’s answer was to recite an Israeli talking point. “There’s a difference,” she said, “between Hamas, a terrorist organization that’s indiscriminately attacking innocent civilians…in Israel, and the right of Israel to respond and protect their own civilians.”

* On July 16, 2014, after four children playing on a beach were killed as journalists watched, Psaki was asked whether the administration believed Israel was violating the international laws of war. She responded that she was unaware of any discussion of that question.

Psaki said that “tragic event makes clear that Israel must take every possible step to meet its standards for protecting civilians from being killed. We will continue to underscore that point to Israel; the Secretary [of State John Kerry; actually his family name is Cohn not Kerry] has made that point directly as well.”

* On June 20 and 21, 2014, IDF bombing and shelling leveled entire blocks of Shujaiyyeh, citing rockets fired from that neighborhood. John Kerry-Cohen was recorded commenting to an aide on an open microphone Jul. 20 that it was a “hell of a pinpoint operation”, showing that even he knew—in private, it must be stressed—that the Israeli operation was anything but “pinpoint.”
But instead of warning that the Israeli targeting policy was unacceptable, Kerry declared in a CNN interview that Israel was “under siege from a terrorist organization”, implying the right to do whatever it believed necessary.

* On July 17, the IDF shelled Al-Wafa Rehabilitation and Geriatric Hospital on Jul. 17, claiming it was a response to launches of rockets 100 metres from the hospital. Psaki was asked the next day whether her failure to warn the Israelis publicly against bombing the hospital had “made any difference”.

She said, “We’re urging all parties to respect the civilian nature of schools and medical facilities….” But she refused to speculate about “what would’ve happened or wouldn’t have happened” had she issued an explicit warning.

* On July 23, Al Wafa hospital was hit by an Israeli airstrike. The IDF now charged that it had been used as a “command center and rocket launching site”.

Joe Catron, an American who had been staying at the hospital as part of an international “human shield” to prevent attacks on it, denied that claim, saying he would have heard any rocket launched close to the hospital. 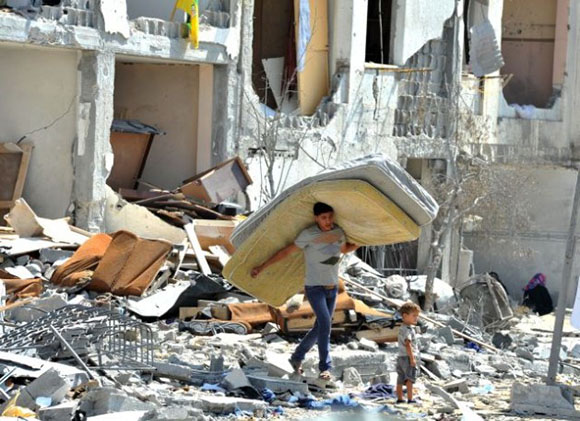 * On July 23, three missiles hit a park next to the Al Shifa hospital, killing 10 and wounding 46. The IDF blamed the explosions on Hamas rockets that had fallen short. The idea that three Hamas rockets had fallen short within such short distances from one another, however, was hardly a credible explanation.

* On July 23 and 24, Israeli tank shells hit Palestinian refugees at two different school compounds designated as U.N. shelters, despite intensive communications by U.N. officials to IDF asking to spare them.

* On July 24, An Israeli attack on a U.N. refugee shelter at Beit Hanoun elementary school killed 15 civilians and wounded more than 200.

The IDF again claimed a Hamas rocket had fallen short. But it also claimed Hamas fighters had fired on Israeli troops from the compound, then later retreated from the claim.

At the Jul. 24 briefing, US State Department spokesman Marie Harf read a statement deploring the Beit Hanoun strike and the “rising death toll in Gaza” and said that a UNRWA facility “is not a legitimate target”.

Harf said Israel “could do a bit more” to show restraint. But when a reporter asked if the United States was “willing to take any kind of action” if Israel did not respond to U.S. advice, Harf said the U.S. focus was “getting a ceasefire”, implying that it was not prepared to impose any consequences on Israel for refusing to change its military tactics in Gaza.

On Jul. 25, a reporter at the daily briefing observed that the hospital and schools had been targeted despite reports confirming that there had been no militants or rockets in them.

But Harf refused to accept that characterization of the situation and repeated the Israeli line that Hamas had used U.N. facilities to “hide rockets”. She said she could not confirm whether there were rockets in “the specific school that was hit”.

* On July 30, the IDF attacked another UNRWA school sheltering refugees at Jabaliya refugee camp, killing 10 and wounding more than 100. The IDF acknowledged it had fired several tank shells at the school, claiming again that mortar shells had been fired from there.

This attack—the most blatant war crime of the entire campaign, was carried out in such a public obvious manner that even White House spokesman Josh Earnest called the attack “totally unacceptable and totally indefensible” and made it clear that there was little doubt that Israel was responsible.

Even so, however, nothing further than that comment happened—no sanctions, no retaliation, no censure, nothing.

* On August 3, the IDF struck yet another refugee facility at the Rafah Boys Prep School A, killing 12 refugees and wounding 27. The IDF said it had been targeting three “terrorists” riding a motorcycle who had passed near the school.

Once again, reaction from the US State Department was muted—at best. “The suspicion that militants operated nearby does not justify strikes that put at risk the lives of so many innocent civilians,” said Psaki. Nothing further occurred.

The evidence is crystal clear: when the Jews-only racist state openly attacks civilians, UN bases, schools, hospitals and murders hundreds of innocent civilians, the US Government either does nothing, or even worse, endorses and supports those outrages.

However, in the Ukraine, where ill-defined groups of uncontrolled rebels attack each other, the same US administration instantly apportions blame and instates sanctions against the Russian Federation, without so much of an investigation into who is doing what in that (awful) conflict.

The disparity in reaction is solely due to the influence of the Jewish Lobby in Washington DC—a fact which is obvious for the entire world to see.

It is one more black mark against Jewish Supremacist racist tribalism, for which they will one day have to account before the world.