The announcement by the Israeli “Defense Ministry” that the Jewish state’s arms exports for 2013 totaled $6.54 billion—more than double what American taxpayers are forced to hand over to their Zionist overlords in “aid” each year—has once again highlighted the ongoing outrageous swindle being perpetrated against the US and its battered economy by the international Jewish lobby. 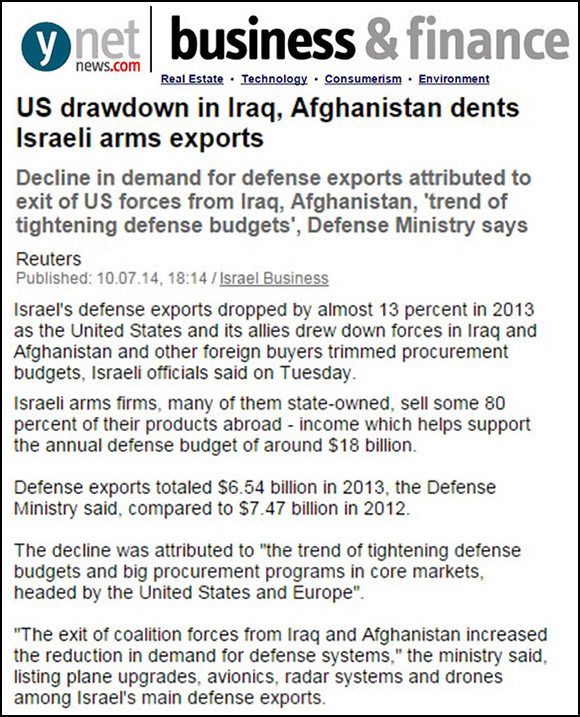 According to a report in the Israeli Ynet news service, the Zio-fanatics are downbeat because their arms export industry is down 13 percent from the previous year—because, they say, the US army has withdrawn from the wars in Iraq, Afghanistan—both conflicts which were created by the Zio-Neocon lobby in the first place!

According to the report:

Israeli arms firms, many of them state-owned, sell some 80 percent of their products abroad – income which helps support the annual defense budget of around $18 billion.

“The exit of coalition forces from Iraq and Afghanistan increased the reduction in demand for defense systems,” the ministry said, listing plane upgrades, avionics, radar systems and drones among Israel’s main defense exports.

The incredible chutzpah and double-dealing of the Jewish lobby is just breathtaking:

First, their controlling agents in the US Government set up “aid” to Israel which is then used to subsidize the establishment of a major arms manufacturing industry.

Second, the Zio-Neocons in Washington DC railroads America into unwinnable, extended wars against those nations hostile to Israel, using outright lies, deception and their extensive mass media control to “justify” those conflicts.

Thirdly, the Jewish extremists then use their contacts inside the US Government to produce “defense contracts” for the Israeli industries—which were set up by US taxpayer money in the first place!

* The fact that the Jewish state’s military earns more than double what economically hard-pressed Americans hand over to Israel—courtesy of their Jewish-lobby controlled administration in Washington DC—once again makes a mockery of the entire “aid to Israel” swindle which has seen the Zio-racists suck untold billions of dollars out of America. 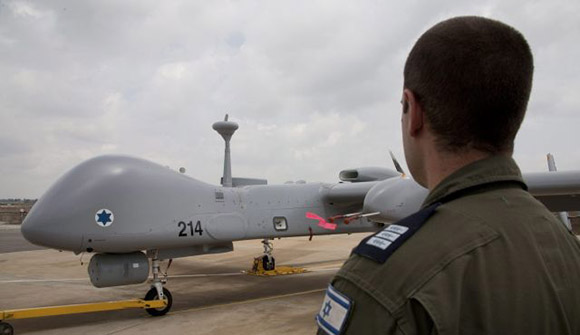 According to the website If Americans Knew, the U.S. provides Israel $8.5 million in military aid each day.

The Obama Administration gave $3.1 billion in Foreign Military Financing (FMF) for Israel for the Fiscal Year 2014. In addition, the U.S. contributed $504 million to the joint U.S.-Israel Missile Defense Program during FY 2014. If that is included, American taxpayers give Israel $9.9 million per day.

Furthermore, since the October War in 1973, Washington has provided Israel with a level of support dwarfing the amounts provided to any other state.

This largesse is especially striking when one realizes that Israel is now a wealthy industrial state with a per capita income roughly equal to South Korea or Spain.”

According to Congressional Research Service, “no other recipient of U.S. military assistance has been granted this benefit.”

Thanks to this indirect U.S. subsidy, Israel’s arms industry has become one of the strongest in the world. “Between 2001 and 2008, it was the 7th largest arms supplier to the world with sales worth a total of 9.9 billion.”

According to McArthur, “[T]he indirect or consequential costs to the American taxpayer as a result of Washington’s blind support for Israel exceed by many times the amount of direct U.S. aid to Israel. Some of these ‘indirect or consequential’ costs would include the costs to U.S. manufacturers of the Arab boycott, the costs to U.S. companies and consumers of the Arab oil embargo and consequent soaring oil prices as a result of U.S. support for Israel in the 1973 war, and the costs of U.S. unilateral economic sanctions on Iran, Iraq, Libya and Syria.

It is estimated the costs incurred by the oil embargo—which are the direct cause of the skyrocketing oil prices and gas costs—totaled in the trillions of dollars throughout the 1990s.

In addition, the Iraq War is now known to have cost the US at least $3 trillion—when all other expenses such as medical care for the wounded over the period of their lifetimes is factored in.

The cost of Israel to the US is therefore, nothing short of astronomical. It is the cost of being subservient to Jewish Supremacism.

Previous Post It is Not “White Privilege” — It is “Jewish Privilege!”

Next Post Hear Dr. David Duke on the Financial Cost to America of Subservience to Jewish Supremacism