Israel and Jews never stood by and supported the “evil white people” in South Africa, contrary to claims of Israel-Apartheid South African cooperation, a leading Jewish Supremacist journalist has said. 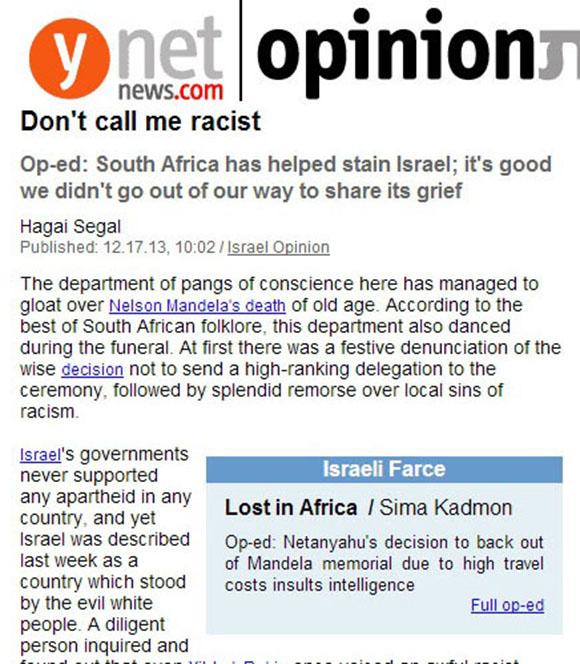 Writing under the title “Don’t Call me a Racist,” Segal said that it was true that “since the 1970s Israel sustained good relations with the government which put Nelson Mandela in prison, but it never supported the apartheid.[sic] Its good relations with that government only developed after the majority of African countries treated Israel with atrocious ingratitude and severed their ties with it, inspired by the Arabs,” he wrote.

”Israel’s governments never supported any apartheid in any country, and yet Israel was described last week as a country which stood by the evil white people,” Segal wrote.

Imagine for a second if a leading non-Jewish academic anywhere in the world, wrote in a major newspaper group about “evil Jews” suppressing Palestinians. It would not happen—and rightly so, because no-decent person would ever sue language like that to libel an entire race.

It is reprehensible to even talk like that, and anyone doing so would, quite correctly, be subjected to intense criticism and even censures.

Such a comment would be given massive publicity in the media, and held up as an example of “hate” which needed to be stamped out.

However, when a leading Jewish journalist uses such a term against European people in a major Jewish news outlet, there is not even the slightest peep of a peep of protest.

There is no blanket coverage of this vicious racist slander, and there is no world-wide condemnation. We can be assured that Segal will not be hounded out of his work, or face any censure at all.

Once again, it is a clear case of Jewish Supremacist double standards: one rule for them, another rule for everyone else.

* Segal was the same Jewish supremacist who wrote earlier this year in Ynet News that “the Gentiles won’t understand” the Zionist seizure of Palestinian land.