The state of Israel was founded upon the science of Jewish racial eugenics and continues with that policy to the present day, as a series of articles published in Jewish newspapers shows.

According to a new report in the Jewish Daily Forward magazine, titled “Israel’s Uncomfortable History of Racist Engineering,” (Jewish Daily Forward, April 21, 2014), written by the opinion editor of the Jerusalem Post, Seth J. Frantzman, even the founder of Tel Aviv’s Department of Sociology and leading Zionist was an outspoken eugenicist. 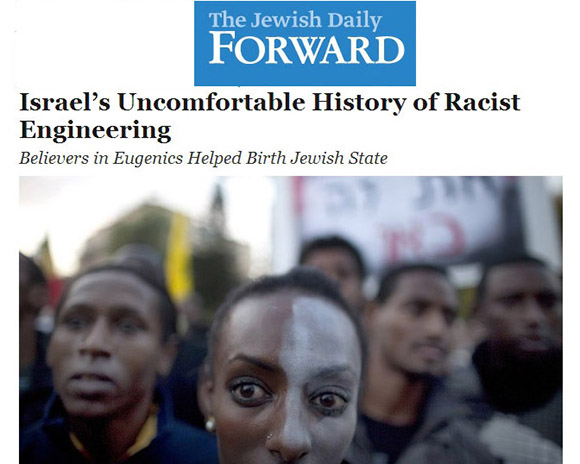 According to the Daily Forward, the Zionist Arthur Ruppin—who, among other things, was the founder of the city of Tel Aviv, head the Jewish Agency from 1933 to 1935, and “father of Jewish Sociology” called for the “purification of the “Jewish Race” and expressly stated that it was “desirable that only the racially pure come to the land [of Israel].”

Ruppin was a major figure in the Zionist narrative, and he is honoured in Israel to the present day, with a building at the Hebrew University of Jerusalem named in his honor.

Many cities in Israel named streets after him, and the city of Haifa has a prize in his name awarded for “extraordinary works” in thinking, philosophy and politics.

According to the Daily Forward, however, Ruppin, was a believer in eugenics.

In 1919 he argued that the Jewish race should be “purified” and that it was “desirable that only the racially pure come to the land.”

As head of the Palestine Office of the Zionist Executive (later the Jewish Agency for Israel), he put his purity schemes into practice, arguing that Ethiopian Jews should not be permitted to immigrate, because “they have no blood connection,” and arguing that Yemenite Jews should be brought only for menial labor. (“Israel’s Uncomfortable History of Racist Engineering,” Jewish Daily Forward, April 21, 2014).

This Jewish eugenics program designed to “purify their race” continues to the present day.

In 2007, for example, Benjamin Netanyahu bragged that the cuts he’d made to child subsidies had brought a “positive” result, which he identified as “the demographic effect on the non-Jewish public, where there was a dramatic drop in the birth rate.”

In 2010 it was revealed that the Israeli government had an officially sanctioned sterilization policy directed at “Ethiopian Jews.” The policy saw Jewish doctors deliberately give female Ethiopian Jews long-lasting contraceptive drugs like Depo-Provera.

When the sterilization policy was exposed, the Israeli government denied it, but continued media coverage on why the birth rates among the “Ethiopian community” in Israel had fallen dramatically, forced the Israeli Health Ministry’s director-general to admit that Depo-Provera has been used without telling the women involved.

The Zionist state was therefore founded on the policy of ensuring Jewish racial purity—and ever since then, this policy has been continued under different names (“the “Jewish state”; the Jews-only immigration policy; the outlawing of marriages between Jews and non-Jews; and many other measures).

All of this proves the important fact that no matter what the Jewish Supremacists might tell the outside world, they know that they are a race and have continually sought to prevent mixing with non-Jews.

Next Post Hear Dr. David Duke on How Jewish Racism is Masked by the Controlled Media