By STAFF — Recent hysterical reports in the Jewish press and other media coverage of one of Dr. David Duke’s most popular videos have helped to boost worldwide viewership of the 100 videos on his TV channel alone to more than nine million total views. Even more amazing is that for every one video on his channel, there are 300 videos posted by people all over the world of his videos and lectures..

Dr. Duke’s video “CNN, Goldman Sachs & the Zio Matrix” (see it below) in particular has now, as a result of the aforementioned coverage, clocked nearly three-quarter of a million views—and that is just on his YouTube channel, and excludes the hundreds of thousands of times it has been viewed on other channels to where it has been copied.

In fact, over 60,000 different YouTube videos have been made from copies of Dr.  Duke’s videos, speeches, lectures and radio shows, and together the total viewership now totals hundreds of millions of views..

In addition, Google allows the ratings of all videos by viewers and Dr. Duke’s videos have a composite rating of 93 percent positive! For instance, the incredibly hard-hitting and convincing CNN video has a rating for its 750,000 views of exactly 96.5 percent positive.

Over the last week alone, Dr. Duke’s personal channel has been viewed in no less than 130 different nations around the world, and the message they carry—that of opposition to Jewish globalist supremacism and freedom for all people of the world, is increasingly resonating among all peace-loving folk of the world. Dr. Duke believes in the right of every people on earth to be free and independent, to preserve their heritage, their precious diversity and freedom.

A recent article in the Jewish Press newspaper—which claims to the be US’s largest circulation independent Jewish newspaper—serves as an example of the sort of hysterical coverage which the Jewish media is giving to Dr. Duke’s videos.

Titled “Five Anti-Zionist Doctors ‘Hijack’ Medical Journal to Dump on Israel” and written by Tzvi Ben-Gedalyahu, it supposedly reports on the recent hullabaloo which took place after medical professionals from around the world published an open letter in the Lancet medical journal which condemned the recent Zio-murder campaign in Gaza. 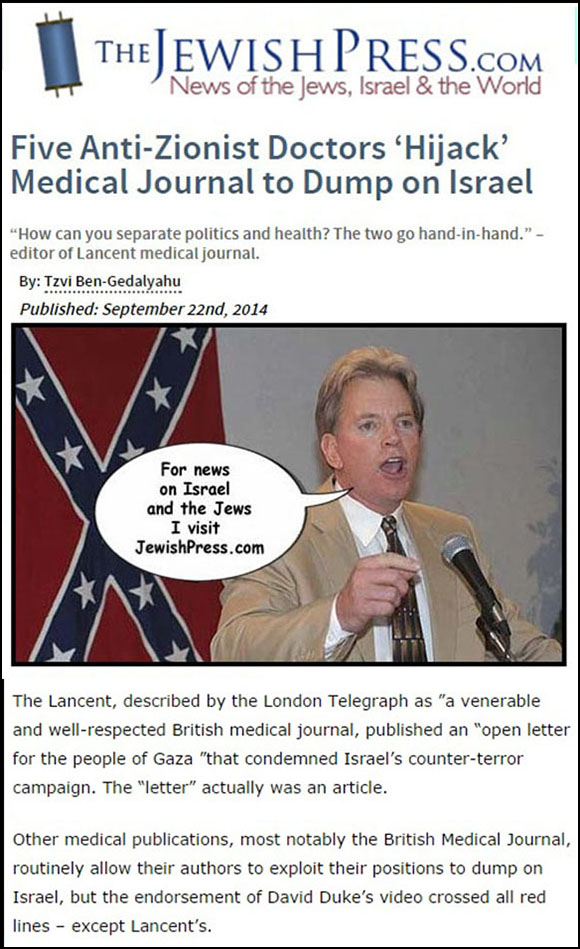 The Jewish Press article—which featured a large picture of Dr. Duke as its main image—showed clearly the hysterical nature of the writer and the editors, as it was littered with the most basic spelling and typographical errors, way beyond any normal level of errors which are found in most publications.

The fact that this article was penned in haste, in hysteria and in hate, is evident from the huge number of errors its contains—particularly if it is borne in mind that the writer claims to be a graduate in journalism and economics from The George Washington University who worked as a “senior copy editor for major Canadian metropolitan dailies” and wrote for Israel’s national news service “Arutz Sheva for several years before joining the Jewish Press.”

For example, the Jewish Press article mistakenly identifies the world-famous Lancet medical journal as the “Lancent” [sic] and its very first line contained another amusing editing error reading “and a [sic] David Duke.”

It goes on to say that the doctors in question circulated Dr. Duke’s video with the following commentary: “The David Duke video in question is called “CNN, Goldman Sachs & the Zio Matri,[sic] in which Duke claims that “the Zionist Matrix of Power controls Media, Politics and Banking” and that “some of the Jewish elite practices racism and tribalism to advance their supremacist agenda.”

From there, however, the hysteria kicks in once again, and the article goes downhill quickly, and devolves into a panicked diatribe against the Lancet journal and the medical professionals who dared to speak out against the Zionist murderers in Gaza, ending the contemptuous remark of “Israel should not be concerned so much if the Lancent [sic] authors represent those calling for academic boycotts of Israel. And you call these people doctors?”

Dr. David Duke is literally waking up the world the the world’s biggest problem, the ultra-racist Zionist Globalism that threatens the freedom and well being of all people. That are driving us to war, hatred in pursuit of Zionist, Israeli geopolitical objectives; that are creating economic slavery through the Zio international banking theft and robbery of every nation and people. He is exposing their grip on the major media conglomerates and its degradation of the highest human values, that saturates our young people with promotion drug and alcohol abuse, sexual degeneracy, violence, blood,  every kind of human sickness and depravity.

Every reader and financial  supporter of DavidDuke.com should be proud that are enabling Dr. Duke and his tremendous work, vital work that depends on all of us to be ultimately successful.

His success is proof of the power of one man to change to the world! As seen by this hysterical reaction of The Jewish Press, the world is indeed waking up!

Previous Post Hear Dr. David Duke on the Enslavement of the US Congress to Israel