By Dr. Patrick Slattery and Dr. David Duke — The leading hiphop website, HiphopDX, published the statements, word-for-word, made by Dr. Duke on his radio show regarding the depravity of some of Nikki Minaj’s songs and videos.

Dr. Duke continues to receive mostly positive comments from its mainly young black audience, despite the vile slander of Dr. Duke’s charactor that they have been exposed to via the Zio-media.

We are constantly told by the Zio-media that Dr. Duke is some sort of racist, white supremacist, yet this unlikely demographic of young hiphop fans can see through the smoke screen and overwhelmingly endorses the viewpoint he expressed on his radio program.

To the extent the comments are negative, it is due to a misperception that that Dr. Duke and myself are blaming all the misfortunes faced by the African American community on rap or hiphop, or that we are ignoring similar depravity from white musicians like Miley Cyrus or Lady Gaga.

This is both incorrect and very much missing the point. We have repeatedly condemed white media icons who pimp dangerous and unhealthy practices. In fact, Nikki Minaj only recently appeared on our radar screens, thanks to an article from the Jewish Telegraphic Agency reporting that the Anti-Defamation League was objecting to the rapper’s latest video — not because of its obscenity, violence, drug promotion or overt sexual content, but rather because of vague “Nazi symbolism.” Promoting violence, promiscuity, substance abuse, well, that’s kosher. (Click here to see lyrics.) 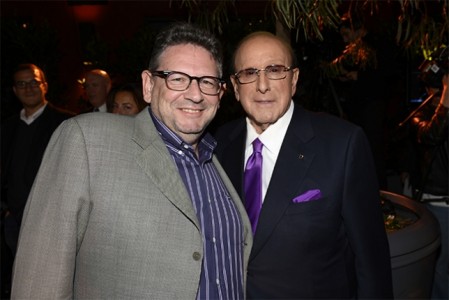 Pictured above are Universal Music Group chairman and CEO Lucian Grainge and Sony Music Entertainment Cheif Creative Officer Clive Davis, two of the record industry’s Jewish powerhouses. Davis formerly headed Colombia Records, Arista Records, and RCA Records. Grainge’s Universal Music Group is the parent company for Minaj’s label, Young Money Entertainment. According to the Jewish Business News, Grainge is so powerful in the industry that in September 2013 Universal Music became “the first record company in living memory to have released each one of the ten singles occupying the top 10 positions in this week’s Billboard charts. Is that domination, or is that domination? Davis’s Sony Group, of course, promoted Miss Minaj in their new movie “the Interview,” notorious for its plot about assassinating the North Korean leader.

To blame hiphop misses the point

Hiphop as a subculture has many facets, and rap as a musical or artistic genre is simply a vehicle for expression. And of course, rap and hiphop culture and style have spread far beyond the black community. The style is not what does the damage. It is not that the”hiphop musical style” is wreaking havoc, it is the underlying messages and images evoked by the lyrics on much of the black community and some segments of the white community.

Of course, rap music originated in the black community and reflects their heritage and experience. The promotion of rap music to non-black demographics has led to a number of problems. First of all, this promotion was carried out by the same zio-record industry that supercharged it with unhealthy and anti-social content. Many blacks resent what they see as the hi-jacking of their culture in order to produce corporate profits. Some even view this as “white cultural exploitation,” although as the comments on the HiphopDX website demonstrate there is a good deal of understanding that it is indeed Jews who dominate the music industry.

At the same time, by the time rap arrived in the white community, it was already in this zionized, degenerate form. As rap emphasizes rhythm over melody, it is less in tune with traditional European musical aesthetics, and can be particularly grating to the ears of older whites. Many whites resent blacks for what they see as a cultural invasion that promotes unhealthy lifestyles and often anti-white attitudes among their own youth, although it needs to be emphasized that it is not blacks who run the record companies and media outlets that form the avenue of this invasion.

In this way, commercialized zio-rap has been an important weapon in the divide and conquer scenario, as it has lead not just to unhealthy behavior among both blacks and whites, but increased animosity between the two communities.

The fact is that the leaders of the record industry as well as the Jewish mainstream media have chosen to promote rap singers like Nikki Minaj or pop singers like Miley Cyrus who allow themselves to be used as the most sickening, degenerate, and unhealthy of role models for our youth.

And it is also important to point out that Jewish tribalists have always dominated the record industry. It is important to point this out because all too often you hear people talk of “white record executives,” when the truth is that the Zio-supremacists care no more about the health and future of white youth than they do black youth.

Some people might be surprised at the level of agreement that hiphop fans are expressing for Dr. Duke’s statements. Personally, I am not.

I once had a graduate student who approached me with a research project that posed the question: Why isn’t socially conscious rap commercially successful? This young man introduced me to a number of rappers who had a great deal to say about their perceptions of the social and political injustice in their environments. Immortal Technique was one. There was also a London-based rapper named Lowkey who had much to say about Zionism and the Israeli occupation of Palestine.

However, Immortal Technique and Lowkey are not signed by the major record labels. Immortal Technique in particular eschews labels because he feels they restrict artistic expression and financially exploit the artists they contract.

By contrast, my student showed me that the rappers with contracts from major record labels focus on sex, drugs, self-aggrandizement, violence, and other anti-social behavior.

So the issue isn’t rap, the issue is a music industry that has been dominated by Jewish racists since the days of Tin Pan Alley. This zio-elite chooses which artists to promote and which to ignore. In the words of one young commentator, “[record executives] are culture vultures taking the most profitable aspects of hip hop (the music and fashion), discarding other aspects (DJing, spray paint, breakdancing), and then pushing it out to impressionable and profitable demographics (young black and white teens respectively).” So the issue isn’t that rap is bad for black people. The main issue is that bad rap is promoted by the zio-media. (Also bad television, bad movies, and on and on.)

One final observation. So many of the commentors on HiphopDX used language like “the sad thing is I agree with this guy.” The zio-media has so thoroughly brainwashed people regarding Dr. Duke that they act surprised that he would show concern for the well-being of black as well as white youth.

Anyone who has been exposed to Dr. Duke’s actual words knows that what he wants for Europeans is exactly what he wants for all peoples of the world: the ability to build a healthy future free of oppression or subjugation. Zio-Hollywood’s films, TV and music promote violence, drug and alcohol abuse, sexual degeneracy and degradation. Its toll of ruined or damaged lives over the last few decades in the hundreds of millions.

Previous Post Hear Dr. Duke Report from the Eye of the Media Hurricane!