Netanyahu’s Congress invitation raises eyebrows among some US generals 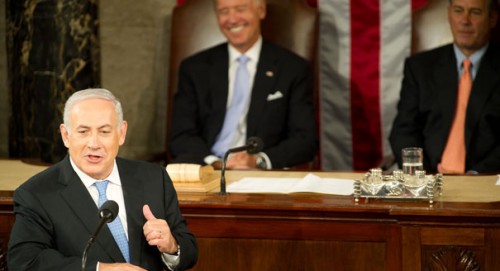 The uniformed leaders of the U.S. military have had a testy relationship with President Barack Obama since he took office in 2009, with a number of relatively public spats revealing discord over how his administration has approached the use of military force. So it might be assumed that when a politician confronts Obama, portraying his policies on threats overseas as naive, many in the senior uniformed ranks would nod in silent affirmation. But that’s not what has happened since House Speaker John Boehner invited Israel’s Prime Minister Benjamin Netanyahu to attack Obama’s Iran policy in Congress. Instead the speech, planned for next month, has rallied senior military figures behind the president, with some warning that there’s a limit to what U.S. military officers consider acceptable criticism of the commander in chief.

Obama and his generals have clashed privately and publicly since 2009 over his plans to draw down troops and exit from Afghanistan, and a number of respected recently retired top commanders told Congress that what they called the administration’s piecemeal strategy against the Islamic State in Iraq and the Levant (ISIL) in Iraq and Syria is destined to fail. Some have also publicly recorded misgivings about Obama’s Iran strategy. Still, Netanyahu’s planned speech has prompted a number of senior military men to rally around the office of a president whose policies they regularly, if privately, question.

Serving uniformed officers are loath to comment on an inflammatory political question — “You’re inviting me to end my career,” one senior Pentagon officer told me when asked to comment on Boehner’s invitation to Netanyahu, “but, if it’s all the same to you, I’d rather not.” But a senior Joint Chiefs of Staff officer who regularly briefs the U.S. high command was willing to speak bluntly in exchange for anonymity. “There’s always been a lot of support for Israel in the military,” the officer said, “but that’s significantly eroded over the last few years. This caps it. It’s one thing for Americans to criticize their president and another entirely for a foreign leader to do it. Netanyahu doesn’t get it. We’re not going to side with him against the commander in chief. Not ever.”

(Read the rest of the story here.)

Next Post Hear Dr. Duke talk about Obamacare, Welfare and the Destruction of America