Any Europeans who might dare to vote for any party which wants to preserve European homogeneity “gives their country a bad name,” the leader of the World Jewish Congress (WJC) has announced. 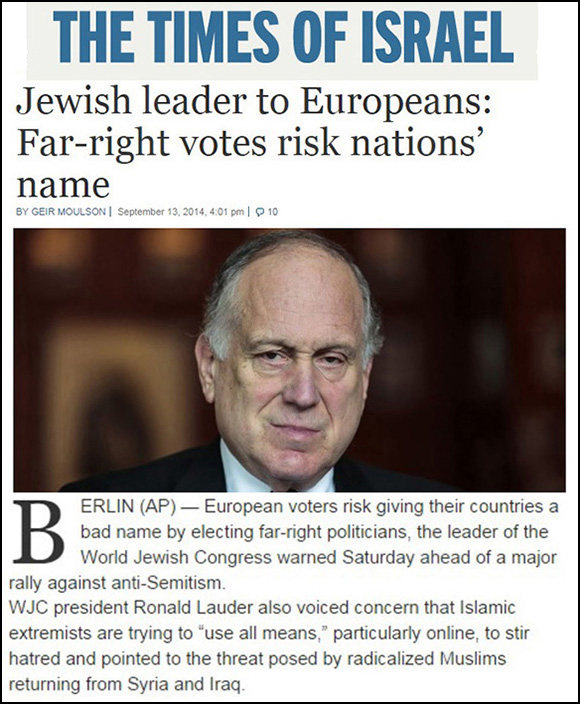 In yet another astonishing bout of blatant Jewish Supremacist hypocrisy, WJC president Ronald Lauder said that “European voters risk giving their countries a bad name” by electing what he called “far-right politicians”—which, viewed in Jewish terms, means anyone who wants to keep Europe European.

The utter hypocrisy of this outburst is obvious when viewed against the backdrop of the racially- and DNA-based immigration policies of the Jews-only state of Israel, the continuous and venomous anti-Gentile racist outpourings of leading Jews in Israel’s church and state leaders, the racially-based marriage laws in Israel, the Jews-only state’s refusal to treat asylum seekers with any regard to international law, and the murderous ethnic cleansing practiced by the Jews-only state against the Palestinians—all of which is fanatically supported by Lauder and his colleagues on the World Jewish Congress.

The Associated Press then added to Lauder’s remarks a sentence which said “In May, European Parliament elections brought successes for far-right parties, particularly in France”—a reference to the success of the Front National in that country.

Thus, viewed through the prism of Jewish Supremacy, Jews who want to preserve Israel for Jews, are ‘good’ and even ‘holy’, but anybody else—and Europeans in particular—who want to preserve their countries for their own people are ‘evil’ and will ‘give their nations a bad name.’

Lauder, whose organization formally represents all of the world’s Jews—so you cannot get much more authoritative than that—did not stop there. This leader of world Jewry also “pointed to the threat posed by radicalized Muslims returning from Syria and Iraq.”

The irony of this attack lies in the two facts:

-Firstly, Jewish organizations in Europe—and America—have been at the forefront of promoting the “open borders” policy for all Western nations (while, of course, pursuing the exact opposite policy for their own state of Israel) and thus are actually now complaining about a phenomena which they largely created themselves; and

-Secondly, that the very conflicts in the Middle East to which Lauder refers, were created and generated by the Zionist lobby in America and Europe in the first place.

The staggering irony—and chutzpah—of the leader of World Jewry now blaming Europeans for policies which Zionist fanatics Jewish Supremacy created, provides yet another window into the paranoiac and utterly deceitful mind of Jewish Supremacy—and why there will never be world peace until this malevolent forces is finally overthrown.

Next Post Hear Dr. David Duke on the Insanity of Supporting Syrian “Rebels”