In yet another example of outrageous Jewish Supremacist hypocrisy, major US Jewish organizations have demanded that Americans not stigmatize immigrants because of diseases they may carry—but at the same time support Israel which openly stigmatizes African immigrants as “carriers of diseases.”

The Anti-Defamation League (ADL), in a blog post titled “Anti-Immigrant Groups Call For Immigration Bans Following Ebola Scare” slammed a whole series of what it called “anti-immigration activists” as “bigots” because they oppose mass immigration from central and south America, and Africa, on the grounds that they pose a serious health and terrorist risk to America,

According to the ADL, anti-immigrant groups [have] seized the opportunity to use this information [Ebola] as a way to speak out against “mass immigration.” 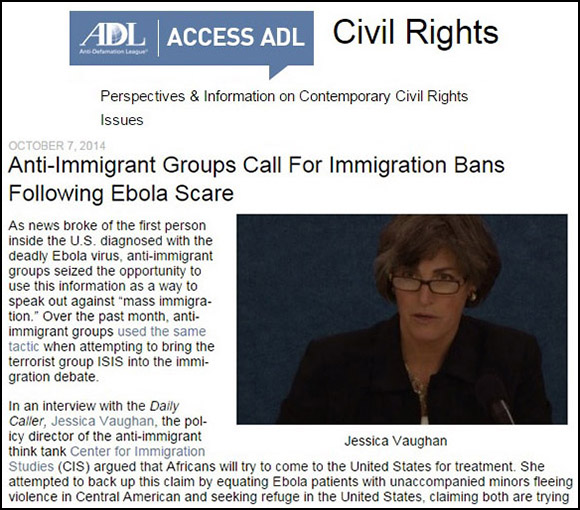 In addition, the ADL blog said, the “anti-immigration activists” had also attempted to use the threat posed by terrorism to try and stop mass immigration into America, saying:

Over the past month, anti-immigrant groups used the same tactic when attempting to bring the terrorist group ISIS into the immigration debate.

Calling Jessica Vaughan, the policy director of the anti-immigrant think tank Center for Immigration Studies (CIS) “bigoted”, the ADL quoted one of her colleagues as well, Mark Krikorian, who called for a ban on travel from Ebola-affected countries in a column for National Review Online.

The anti-immigrant movement often paints immigrants as disease carriers in an attempt to create a climate of fear around the issue and call for a restriction on immigration. Attempting to capitalize of the recent Ebola diagnosis is the latest example of this trend, the ADL blog concluded.

However, in Israel—which the ADL fanatically supports—these “bigoted” arguments are exactly those used by the Israeli government to keep out immigrants!

As revealed in an article published in the Jewish Daily Forward of October 23, 2014, new measures have been introduced at all Israeli airports to screen visitors for Ebola.

In addition to identifying immigrants as carriers of diseases, the Jews-only state clearly linked immigrants to terrorism—exactly the things which the ADL calls “bigoted” if said by any Americans!

These precautions [about Ebloa] came after a highly publicized meeting Prime Minister Benjamin Netanyahu convened 10 days ago, where he announced that Israel is prepared to stop the entry of Ebola patients into its borders.

Netanyahu went on to define these steps as “part of Israel’s general efforts to protect our borders from illegal infiltrators and terror.”

This is not the first time that African migrants and fear of contagious diseases are mentioned in the same sentence. Several officials and the Israeli media have made it a habit to associate epidemics with Africans who reside in Israel.

While he was still the interior minister of Israel, Eli Yishai said that African migrants bring in “a range of diseases such as hepatitis, measles, tuberculosis and AIDS.”

Michael Ben Ari, while serving as an MK, rejected the idea of an Israeli girl going to school with African kids and said, “Who knows what diseases they carry. These are very serious viral diseases.”

In May 2012, prominent Israeli physicians warned that asylum seekers from Africa are “a real health time bomb.” Two months later Tel Aviv’s Ichilov hospital barred them from entering the hospital to visit family and friends in order “to minimize health risks.”

Concerns of terrorism are often mentioned with regard to African migrants as well. In mid-2011, the mayor of Eilat sent an urgent letter to the defense minister following the arrival of dozens of asylum seekers in his town. In his letter he argued: “Today they are infiltrators, tomorrow they are terrorists.” When Yishay formed a task force to deal with the “infiltrators problem,” it released a report that cited the risk of terrorism as a justification for removing and preventing the entry of African migrants.

Netanyahu declared war on those he defines as infiltrators and terrorists a long time ago. Throughout his term and especially in the past year we have witnessed just how excessive the means to pursue this war can be. Placing Ebola next to these two terms not only signals to Israelis that the Ebola threat to Israel is real and scary but also serves to remind them, once again, that the three are linked.

So, in the Jews-only state of Israel—which the ADL unequivocally supports—immigrants are openly blamed for Ebola and threatening the public health.

But anyone who dares say this in America, is attacked by the ADL as a “bigot”!

How much more blatant can Jewish Supremacist be? It is the standby rule: one law for the Jews, another for the hated Goyim. 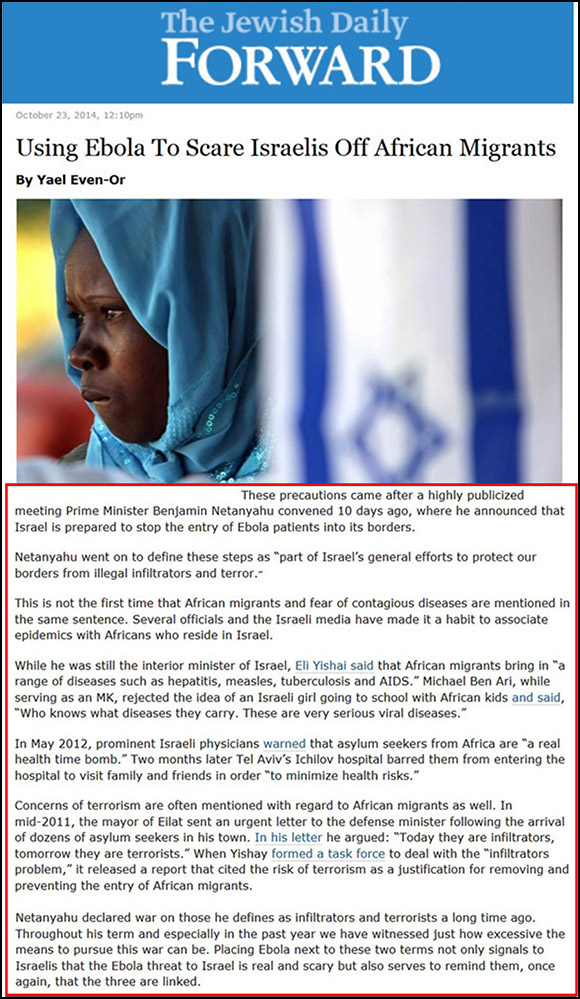