Six weeks to save Schengen: Dutch PM says Europe ‘cannot cope’ with migrant crisis and EU’s passport-free zone is on brink of collapse

By Corey Charlton for MailOnline

The Dutch Prime Minister has today claimed Europe ‘cannot cope’ with the migrant crisis and has just six weeks to save the Schengen Agreement.

Mark Rutte said Europe had just six to eight weeks to get a handle on the influx of refugees from conflict zones in the Middle East and elsewhere.

While he believed the borderless travel zone could be saved, he said the bloc must first agree on a replacement of the failed Dublin system, which says migrants must seek asylum in the first EU country they enter. 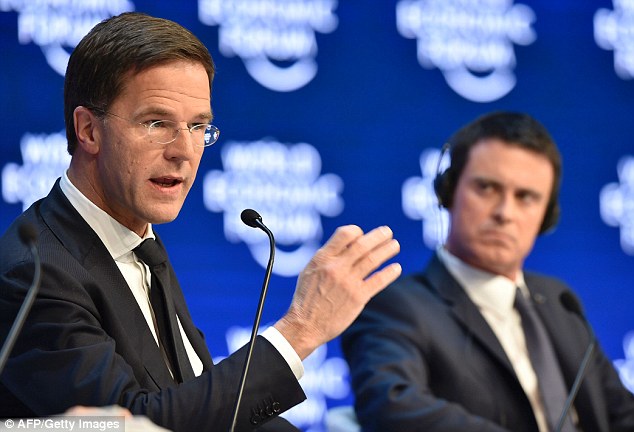 ‘We have 6-8 weeks,’ Rutte told a panel on Europe at the World Economic Forum in Davos, Switzerland.

His warning comes as Macedonia today reopened its borders to migrants travelling on to Austria and Germany.

Some 1,700 people had been stranded in freezing temperatures at Greece’s northern border with the country in the past two days.

But they have now allowed entry to those heading north to the wealthier European countries of Germany and Austria.
Click here for the full story

The Iraqi prime minister has cast doubt on Turkey’s willingness to combat Daesh terrorists, saying Ankara should focus on fighting the Takfiri group instead of targeting its Kurdish population.

Haider al-Abadi said in an interview with CNBC at the World Economic Forum in Davos, Switzerland, on Thursday that Turkey viewed the Kurdish population within its border as a greater problem than Daesh.

“The Turks are telling us otherwise, (that) they’re eager to fight Daesh. But I’m telling them frankly, I’m not seeing evidence of that. I hope to see more evidence of that,” Abadi said.

The Iraqi premier further urged officials in Ankara to take Daesh threats seriously and “shift their priority from considering the Kurds as their problem” to battling the Takfiri terror group, which has seized swathes of land in Iraq and neighboring Syria since 2014.

Abadi also expressed Baghdad’s willingness to improve relations with Ankara, but made clear that Turkey’s extension of its troop deployment to Iraq was “not helpful at all.”

“I think Turkey is looking to go back to the Ottoman Empire thing, I don’t think there’s a place in the region for that,” he added.

Last month, Turkey deployed some 150 soldiers, equipped with heavy weapons and backed by 20 to 25 tanks, to the outskirts of Mosul, the capital of Iraq’s Nineveh province.

Ankara claimed that its troops had been deployed in northern Iraq to train Iraqi Kurdish Peshmerga fighters against Daesh.

Abadi has said Turkish troops deployed to northern Iraq were causing a “lot of tension,” adding there was no reason for their deployment deep inside the Iraqi border.
Click here for the full story

China has lent its support to the establishment of the State of Palestine with East al-Quds (Jerusalem) as its capital.

Chinese President Xi Jinping made the remarks during an address at the Arab League’s headquarters in the Egyptian capital, Cairo, on Thursday.

He said such state should be established based on the 1967 borders and enjoy full sovereignty.

That year saw Israel occupying and then annexing the Palestinian territories of the West Bank and East al-Quds during the Six-Day War in a move that has never been recognized by the international community.

Xi’s remarks echoed the demands of Palestinians, who are seeking to create an independent state on the occupied territories as well as the Palestinian enclave of the Gaza Strip.

Israeli settlers have taken over two Palestinian houses in the south of the occupied West Bank, claiming they had bought them despite the Palestinian law banning such transaction.

“A group of dozens of settlers accompanied by rabbis broke into a building on Shuhada Street,” activist Jawad Abu Eisheh told AFP of the Thursday incident in the city of al-Khalil (Hebron).

There were Palestinians living in other houses in the building at the time of the forced entry, which sparked clashes with the locals.

Israeli forces also turned up at the scene and deployed sound grenades to protect the settlers against the protesters. A number of Palestinians suffered injuries during the confrontation and were taken to hospital.

Israeli Immigration Minister Ze’ev Elkin praised the invasion as a “determined move” to expand the Israeli presence in the city, calling on fellow Minister for Military Affairs Moshe Ya’alon “to give the settlers all the help he can, and not give in to the pressures” of the Palestinians.

The occupied territories have witnessed a rise in settler violence against Palestinians in recent months.
Click here for the full story

The brother of Aleksandr Litvinenko says the UK government had more motivation to kill him than Russia did, despite a British public inquiry which concluded that President Putin “probably” approved the assassination.

Maksim Litvinenko, Aleksandr’s younger brother who lives in Rimini, Italy, responded to the Thursday report by saying it was “ridiculous” to blame the Kremlin for the murder of his brother, stating that he believes British security services had more of a motive to carry out the assassination.

“My father and I are sure that the Russian authorities are not involved. It’s all a set-up to put pressure on the Russian government,” Litvinenko told the Mirror, adding that such reasoning is the only explanation as to why the inquiry was launched 10 years after his brother’s death.

He called the British report a “smear” on Putin, and stressed that rumors claiming his brother was an enemy of the state are false. He added that Aleksandr had planned to return to Russia, and had even told friends about the move.

Litvinenko went on to downplay his brother’s alleged role as a spy, working for either Russia or MI6, adding that the Western media is to blame for such characterization.
Click here for the full story

Refugee panic: EU leaders turn on one another as new wave of migrants prepares to hit Europe

Weeks remain before warmer weather reactivates the trails that brought over 1 million migrants into the EU last year. With officials unable to agree on a common policy, their rows are no longer behind closed doors, but are being played out in public.
Click here for the full story

The finding comes as the world’s richest business leaders and most powerful heads of state gather in Davos for the start of the annual four-day summit.

Fifteen years into the millennium, the evidence suggests the world’s rich are only getting richer, while the least well-off half of the world remain in borderline poverty. WASHINGTON (JTA) — A top U.S. negotiator with Iran said enduring the tension the talks engendered between the Obama administration and Israel and the Jewish community was very painful.

“For me personally, one of the most difficult parts was the tension with this beloved country and its people,” Wendy Sherman, who led the U.S. team in the talks between Ian and six major powers leading to the sanctions relief for nuclear rollbacks deal.

“So having the dissension and the difficulties that we had in this process — and with the American Jewish community of which I consider myself a part — was very, very painful,” she said Tuesday at the Institute for National Security Studies in Tel Aviv, according to Defense News.
Click here for the full story

Abbas: I agreed to meet Netanyahu, he didn’t respond

Speaking to Israeli reporters, the Palestinian president claimed that his office in Ramallah communicated with the PM’s office several times, sans American mediation, even trying to arrange a meeting between the two leaders. Speaking to Israeli reporters on Thursday, Palestinian President Mahmoud Abbas said that for the past two months his office and Prime Minister Netanyahu’s office have been communicating in an attempt to arrange a meeting, but that Netanyahu did not respond to the latest message.
“There have been talks between my office and Netanyahu’s office and the US was not in the picture at all,” Abbas said Thursday. “Among other things, there were talks about a meeting between us.” The Prime Minister’s Office rejected the claims, saying: “This is not true. This is an attempt by Abbas to avoid his responsibility for the lack of negotiations. Today as well, in Davos, Netanyahu called for Abbas to come and negotiate without preconditions.”

According to the Palestinian president, it was agreed that the sides will appoint two representatives each, who will coordinate the meeting. “I agreed, and haven’t heard any response from Netanyahu ever since,” Abbas claimed.
Click here for the full story

The Mercator chain placed a new order for fruit from Israel, including pomelos and avocados, two days after announcing that it would remove Israeli products from its shelves, Ynet reported Thursday.

The Israeli Foreign Ministry summoned Slovenia’s ambassador over the issue before Mercator reportedly changed its decision. A similar decision was rescinded in 2014.

The Slovenian Embassy in Israel said in a statement, according to Ynet: “There is no Slovenian boycott on Israeli products. The agreements between the European Union and Israel are the basis of Israel’s special status in its relations with Slovenia as well. The government of Slovenia has not held stocks in Mercator since 2014. The ties between Israel and Slovenia have always been good and are characterized by vast cooperation, mostly in the fields of economics, science, research, advanced technologies, and tourism.”
Click here for the full story

Bahraini demonstrators have once again taken to the streets of the tiny Persian Gulf country to express their solidarity with detained political activists, including senior Shia cleric Sheikh Ali Salman.

Sheikh Salman was detained on December 28, 2014 on charges of attempting to overthrow the ruling Al Khalifah regime and collaborating with foreign powers. He has strongly denied the charges, emphasizing that he has been seeking reforms in the kingdom through peaceful means.

In June 2015, a Bahraini court sentenced him to four years in prison on charges such as insulting the Bahraini Interior Ministry and inciting others to break the law. He was acquitted of seeking regime change.

During the Friday rallies, the demonstrators also stressed that they would continue peaceful protests for the fulfillment of their democratic demands.

They also condemned corruption in the country and the government’s economic policies that overburden the citizens.
Click here for the full story