Dr. Duke Quotes Jewish Extremist Who Exposes Himself by Warning Jews Not to Tell Truths that Dr. Duke can Quote!

In today’s show Dr. Duke quotes an article by a Jewish writer by the name of Elad Nehorai who warns Jews like comedian Larry David against saying anything about Jewish power or Jewish misbehavior for fear that David Duke will quote it. Nehorai wrote of his own experience of writing about Jewish control of the media in a Jewish publication aimed at a Jewish audience, only to have Dr. Duke bring it to the attention of the goyim. The article was pulled from the internet, but in this latest article Nehorai acknowledges its existence and the motive for pulling it. 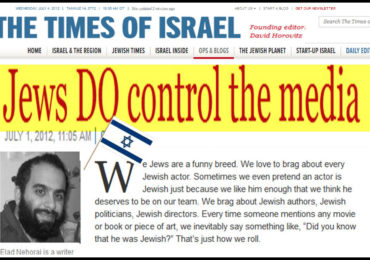 Dr. Slattery joins the show and makes the point that Jewish advocacy groups with their billions of dollars in annual budgets still shake in the Yarmulkes at the thought of David Duke exposing them. Of course, Jews like Harvey Weinstein are doing a pretty good job of exposing themselves as it is.