In today’s show Dr. Duke talks to Daily Stormer jounalist Eric Striker. They look at the defeat of ISIS by Team Civilization, namely the alliance of President Assad’s government, Putin’s Russia, Iran, and Lebanon’s Hezbollah. This defeat for Team ISIS comes despite the support of Israel, Zio America, and the Zio-allied (((moderate))) Arab states like Saudi Arabia (LOL) and Qatar. 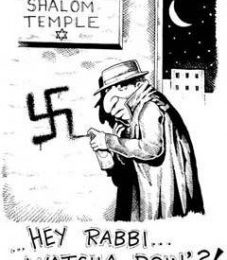 They also discuss the phenomenon of self-inflicted “hate crimes.” Since the election of Donald Trump, practically all of the anti-semitic hate crimes have been hoaxes. Surprised?

Previous Post Dr. Duke Quotes Jewish Extremist Who Exposes Himself by Warning Jews Not to Tell Truths that Dr. Duke can Quote!