Today Dr. Duke talked about the resident Trump “tour of humiliation” to the Middle East and Europe. First stop: Saudi Arabia, the very country who he blamed for 9/11 and the principle DIRECT backers of ISIS. (The Israelis try harder to disguise their support.) The Saudi’s also export Islamic extremism and terrorism all over the world, and have built a giant network of extremist mosques in Europe to make sure the refugees and other Muslims in Europe are sufficiently radicalized. 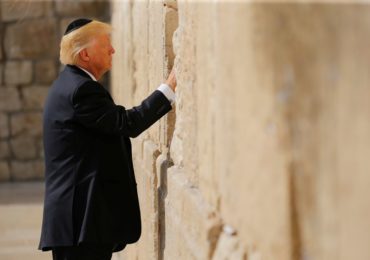 That’s the WRONG WALL, Mr. President. And that yarmulke will destroy your hair!

Dr. Slattery joined the show and pointed out that if you wanted to send the President on a foreign trip that would make him look really bad, you couldn’t have done any better than this one. In Israel he will have to defend himself for not having followed through on his indefensible promise to move the American Embassy to Jerusalem, in Rome he will have to eat humble pie after his open feud with the pope last year over his plan to build a border wall, and in Brussels he will be pressed to acknowledge his flip flop on NATO’s relevance. Don’t Trump’s decision to try to appease the Jews by appointing never-Trump neocons and Goldman Sachs banksters to key positions in the administration has come back to bight him “big league.”

Next Post Dr. Duke Proves the Connection between the Manchester Massacre and the Zionist Deep State!