Dr. Duke had a very special “May Day show” in commemoration of the traditional Zio-Communist holiday. He discussed a New York Times article titled “When Communists Inspired Americans” by a Jewish writer fondly reminiscing about her stridently Communist parents and their devotion to a Jewish-dominated Communist Party. Of course, the ideals of communism are completely unrealistic and the supposed pursuit of these ideals led to the bloodiest chapter in human history. Of course, if the truth be told, it was not the ideals of communism that were being pursued, but rather raw Jewish tribal power was the objective. 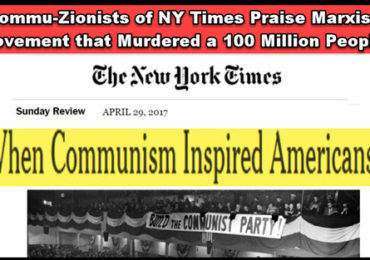 Dr. Slattery joined the show and underscored the point that the fundamental issue is that we have a Jewish elite that have come to dominate the main sources of power in our country, and that elite is hostile to the white Christian traditional majority. While most whites cannot tell Jews from whites of European decent, Jews typically CAN distinguish themselves from whites. And while even some “white nationalists” will say that “Jews look white to me,” the fact is that Jews typically do see themselves first as foremost as Jews and see their Jewish tribal interest as being very distinct and in many ways diametrically opposed to the interests of the white majority. So while in superficial ways they may seem to be “assimilated,” their interest are not assimilated, and thus their behavior is at odds with white interests. That is why they support massive immigration. That is why they promote black and other non-white hostility to whites. That is why they support homosexuality and transgenderism, which interfere with our reproduction. They even indoctrinate white woman and white gays to see themselves as victims of the white man and thus allied with anti-white forces.

This is another powerful show sure to wake up whoever listens to it. Please share it widely.