Today Dr. Duke started the show by addressing the shutdown of free speech on platforms like Twitter. While the crackdown on free speech by white advocates started in the wake of Charlottesville, yesterday’s Twittercaust ironically coincided with the resignation of Charlottesville’s black police chief after an independent report found that he had ordered police to “let people fight” (in other words, let law-abiding white people be attacked by Black Lives Matter and Antifa). With the whole fake news narrative around Charlottesville unraveling, the Zio media has no choice by the clamp down on free speech. 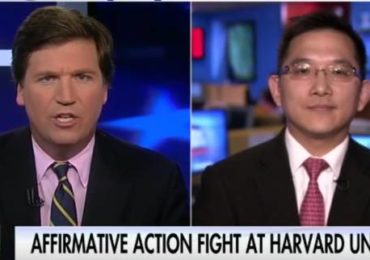 He and Dr. Slattery also discussed a post made in April by a Washington State Antifa group in which they bragged about dumping cement on train tracks in order to sabotage the train system due to its reliance by the fracking industry. Of course, these same “largely peaceful” Antifa “counter-protesters” had smashed James Fields car with baseball bats, leading directly to his car accident. Yet the media loves Antifa and largely created them, going in some case as far as calling for President Trump’s impeachment when he noted that some of them were bad people.

Also, Tucker Carlson made the case that white Protestants were being discriminated against at Harvard! We live in interesting times. This show was another powerful show filled with information. Please share this show widely. And the David Duke show has done more to make it possible for us to even say “Merry Christmas” than any other show. So please keep us on the air and on-line. Please visit our contribution page or send your contribution to:

Previous Post Dr. Duke & Andy Hitchcock of UK on the Zio War on Christmas – the Ancient Celebration of Solstice & Their War on Trump! Also – the Sackler Opiate War on White Working People!