Today Dr. Duke had Attorney Don Advo as his guest. They talked about Richard Spencer’s speaking event at Auburn University in Alabama. The Univeristy caved into Zionist pressure to cancel the speech at the last minute, but Mr. Spencer was able to get a Federal Court to side with him just hours before the event was to start. The event was a success, partly due to the fact that the police actually enforced the law and prevented the Antifa from wearing masks. With their faces exposed, the Antifa were not able to violently attack Spencer’s audience. 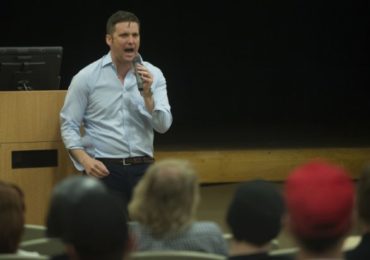 Mr. Spencer was well received by the Auburn student body, and this goes to show that increasingly our young people are waking up to the lies of the Jewish media and the PC narrative fed to them by their professors.

This is an inspiring show that you will want to share widely. Please send a contribution to keep it on the air.

Next Post Dr. Duke & Mr. Striker Expose the Jewish Ultra-Racists Who Tried to Shut Down Spencer and The Zionist Media and Deep State Who Support ISIS & Oppose Assad!