Contrary to claims by a tiny handful of apologists, the vast majority—the overwhelming, massive majority—of Jews and Jewish organizations throughout the world unequivocally support Israel and the ongoing Zionist mass murder campaign massacre in Gaza. 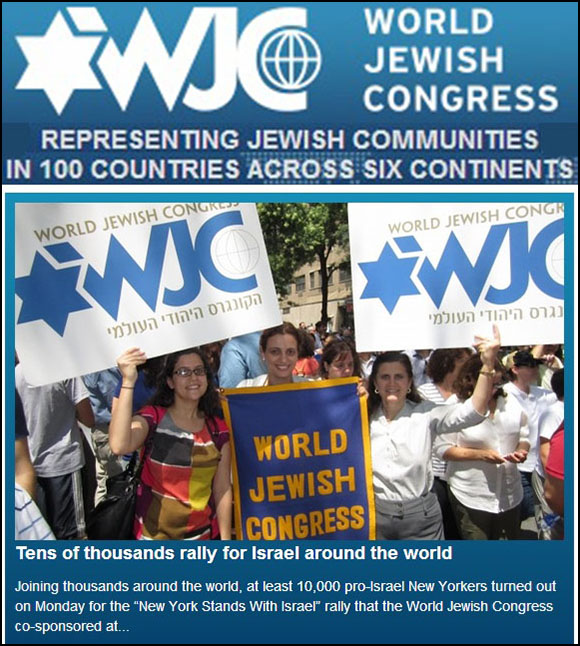 The World Jewish Congress—which is, according to its own description, an “international organization that represents Jewish communities and organizations in 100 countries around the world,” has even recently completed a “solidarity with Israel” special trip to Israel to demonstrate their unfailing support for the Jewish state.

It is the same story in the US. A public statement by the Conference of Presidents of Major American Jewish Organizations, the umbrella body which represents every single of the 50 major Jewish organizations in America, has issued a formal statement titled “Jewish Leaders Support “Operation Protective Edge” in which they specifically support the Zionist murder plan in Gaza. 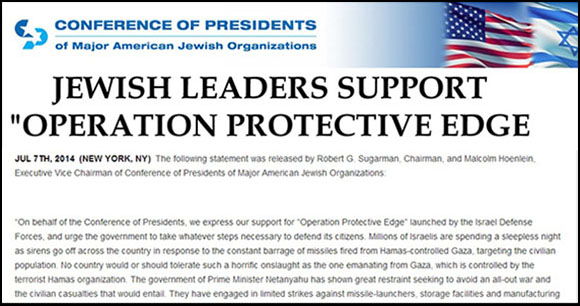 The Conference of Presidents of Major American Jewish Organizations represents the 50 largest Jewish organizations in America is, according to its own description, the “voice of organized American Jewry” which is “at the forefront” of countering the “global campaign to delegitimize Israel.” The organizations of “Jewish Advocacy” have hundreds of millions of dollars at their disposal.

(The statement goes on to claim that the Israeli government has “shown great restraint seeking to avoid an all-out war and the civilian casualties that would entail. They have engaged in limited strikes against missile-launchers, storage facilities and manufacturing locations”—a blatant lie as the increasing toll in lives of women and children show all too clearly).

In Britain, the situation is also no different. The Board of Deputies of British Jews has also made its support for Israel clear: It states that support of Israel is “central” to its work, “which is why the Board remains unwavering in its approach, as stated in our Constitution, to take such appropriate action as lies within its power to advance Israel’ security, welfare and standing.”

Some uniformed people try to suggest that religious Jews, or “true Jews” don’t support the Zionist Criminal State. In fact, every major synagogue on earth supports Israel and they all voice solidarity with Israel in its latest mass murder!

There are a tiny few orthodox Jews who have doctrinal disagreements with the setup of the Jewish Zionist state. But, they are minute in a tiny in number and are virulently hated by all the main Jewish religious and secular groups. The problem is that these tiny splinter groups are used by uninformed Gentiles to create the impression that “true religious Jews” oppose Israel — when the the exact opposite is true.

You cannot fight the evils of Zionism unless you oppose the organizations, both religious and secular, that support it. Organized Judaism as well as secular Jewish community organizations all over the world are practically unanimous in supporting the horrific crimes of Israel.

The evidence is therefore clear: while there are a small number of Jews who oppose Zionism, the overwhelming majority of organized Jewry all over the globe speak with one voice: they support Israel, and they support the massacre of the innocents in Palestine.

So next time you hear about the “good Jews” who oppose the Zio-Murder machine, acknowledge those tiny few individuals are righteous, honest people, and Jews who we respect—but bear in mind that they are a microscopic part of a much larger and well-organized Jewish establishment which always puts Israel first.

The fact is that you cannot oppose Zionism unless you oppose the Jewish tribalist organization and influence all over the world that supports Zionism and corrupts and bends nations to the Zionist Agenda! 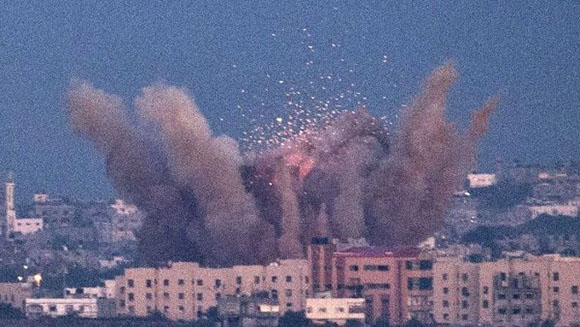