Even though the Islamists who now threaten the American-created Iraqi state are the violent enemies of America, the Zionist state’s leader has candidly admitted that the Jewish Supremacist strategy is to divide and conquer rather than let any one side win. That is why Israel has supported ISIS in Syria, and why the Jewish Lobby has gotten America to fund with money and weapon the “rebels” in Syria who are affiliated with al Qaeda.

Netanyahu admits that Israel is against clear American interests in Iraq.  America supports the  government it established there, and obviously does not want a huge empire to the north of al Qaeda terrorists. But Israel actually loves the rise of al Qaeda, but doesn’t want it to take over all of Iraq.

If al Qaeda is the greatest terrorist threat to America, and that the fall of Iraq to al Qaeda aligned forces would pose horrific dangers for America, why then have we supported in Syria the same forces that are taking over Iraq?

Now, we learn the truth! Our supposed ally, Israel, has exactly the opposite position on Iraq as we do. They love the massive ISIS control of Iraq and Syria, but they want to keep the bloodshed going, and not to have one side win because they see it as a “divide and conquer” scenario that weakens Israel’s enemies.

At the bottom of the article you can see a map of the latest extent of the ISIS growing empire. Note it includes the areas of the “rebels” in Syria, areas that the United States of America has supported with American money and weapons! It was obviously never in the interests of America to support al Qaeda in Syria. The only way you can explain it is that Syria was a staunch enemy of Israel and allied with Israel’s enemies such as Iraq and the Palestinian people.

Jewish power in the American government and the world media is so strong that they have been able to get American officials to treasonously  support al Qaeda because Israel sees it in its interest.

After being told of the 9-11 attack, Netanyahu responded to the NY Times reporter saying, “It’s very good!”

Asked tonight what the attack meant for relations between the United States and Israel, Benjamin Netanyahu, the former prime minister, replied, “It’s very good.” Then he edited himself: “Well, not very good, but it will generate immediate sympathy.” He predicted that the attack would “strengthen the bond between our two peoples, because we’ve experienced terror over so many decades, but the United States has now experienced a massive hemorrhaging of terror.”

Even after generously allowing Netanyahu to “edit” himself, the Times did not conceal that Netanyahu was not thinking in terms of sympathy for the victims of 9/11 and the United States, nor what a “friend” could do to help America. Rather, he was already thinking on the day it happened about how 9/11 could be manipulated to get America to do more for Israel.

In truth, Israel does not give a damn about America, in fact they see any attacks on America as the perfect device they can use to manipulate America into war against Israel’s enemies. 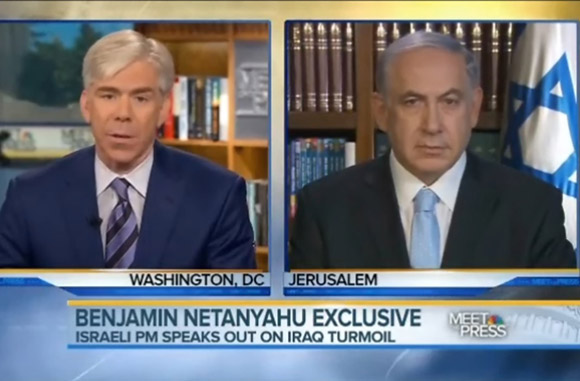 The confession that Israel is very happy with the huge ISIS swatch in Syria and Iraq and even their conflict with the American supported government of Iraq—a rare flash of honesty from the Zionist Supremacists—was made by Israeli prime minister Benjamin Netanyahu on the June 22 edition of NBC’s Meet the Press.

Asked about what American policy in Iran should be (a question which by itself—directed to the leader of a so-called “foreign” nation—indicates where the real power base in American politics is situated) Netanyahu immediately resorted to the standby Jewish Supremacist canard about Iran’s mythical “atom bomb.”

Linking the Iraqi government to Iran—even though, as the world knows, the current Iraqi regime was installed by the US—Netanyahu claimed that the “worst outcome” was the acquisition of a nuclear weapon by Iran.

There is, of course, no link between Iran’s mythical “atom bomb” and the Islamist ISIS threat to Iraq, but that outright lie did not serve to distract the Zionist leader from his real aim: namely to admit that the ultimate strategy is to divide and conquer.

“What you’re seeing in the Middle East today in Iraq and in Syria is the stark hatred between radical Shiites — in this case led by Iran — and radical Sunnis led by al-Qaeda and ISIS and others,” Netanyahu said.

“Now both of these camps are enemies of the United States, and when your enemies are fighting each other, don’t strengthen either one — weaken both.

“And I think by far the worst outcome that could come out of this is that one of these factions, Iran, would come out with nuclear weapon capability. That would be a tragic mistake — it would make everything else pale in comparison.

“I think that there are two actions you have to take: one is to take the actions that you deem necessary to counter this ISIS takeover of Iraq, and the second is not to allow Iran to dominate Iraq the way it dominated Lebanon and Syria.

“You actually have to work on both sides — as I say, you try to weaken both.”

This open admission of Zionist policy can be seen at work all over the world: on the so-called “left” of the political spectrum, the Jewish Supremacist agents incite conflict on class and economic interests (the Marxists and so on); while on the so-called “right” of the political spectrum, Jewish Supremacist agents (such as the neo-cons and their allies) incite conflict on nationalistic grounds (such as the 2003 invasion of Iraq).

In reality, these Jewish Supremacist agents are working to the same agenda—to divide their self-appointed enemies, the Goyim people, so that they are distracted away from the real racist supremacist threat to the world.

* Within hours of Netanyahu admitting  that the “divide and conquer” strategy was the real Jewish Supremacist aim, the Israeli air force carried out yet another Zionist terrorist attack on Syrian army positions inside Syria as part of this policy.

The Israeli air force strike against a Syrian army base was made after a stray missile, fired in the course of the ongoing Syrian “civil war”, flew across the border and killed a Palestinian child on the Israeli side.

Even though the Zionist army’s own intelligence said that the missile had been fired from areas under the control of the Syrian “rebels”, the Jewish terrorist army immediately launched an attack upon the Syrian army—which is fighting the very same “rebels”—and killed dozens of its soldiers.

The attack was yet one more blatant example of the “divide and conquer” strategy outlined by Netanyahu and the Zionist Supremacists, a tactic which is repeated again and again all over the world.

Here is the latest map of the Isis controlled parts of Syria and Iraq.

This could not occurred if America did not support the ISIS terrorists in Syria and tried to undermine the government of Assad in Syria. The only reason, America went against Assad is because Israel sees a strong and untied Syria as threat to Israel control of the Mideast. Unlike all decent-minded people around the world, Israel loves the terrorist invasion of Syria and the loss of hundreds of thousands of lives and millions facing misery in Syria, because they see it as weakening their enemy.

The truth is that the Zionists are the biggest enemy of human rights, peace and well-being on Earth! — David Duke 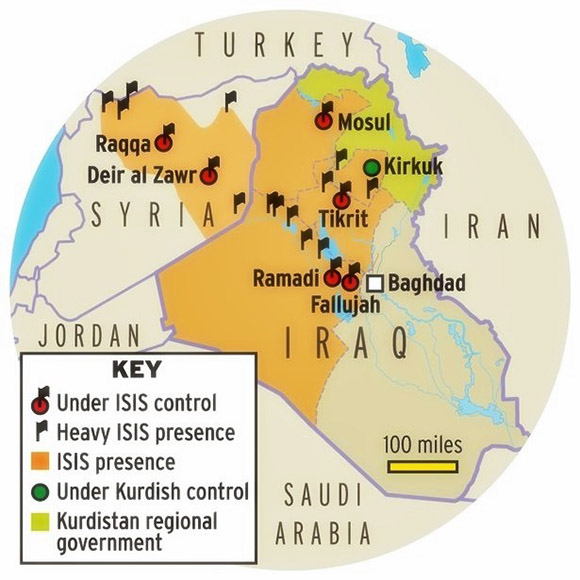 Previous Post Why Barack Obama and most of the U.S. Congress are Guilty of Treason