In yet another remarkable display of Jewish Supremacist chutzpah, Israel has just concluded the purchase of $2.75 billion worth of F35 jet fighters from America—the second such purchase in recent times—funded from the total US taxpayer-funded “aid” to Israel which has now topped $3.1 billion (and is set to increase).  a report in The New Observer has pointed out. 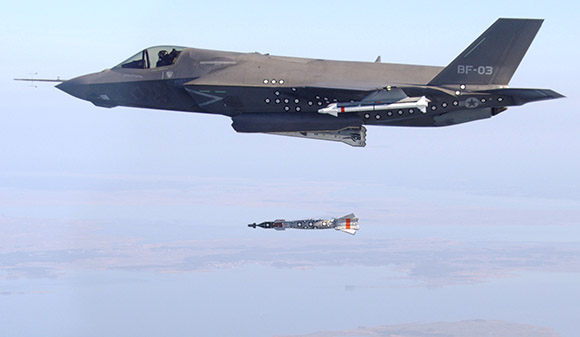 The incredible swindle—where the US government uses vast amounts of taxpayers’ money to give to the Jews-only state, which then uses that money to buy more highly sophisticated weapons to bomb and murder its enemies—is only possible because of the firm grip over the American government exercised by the Jewish lobby.

News of the “deal” was, of course, completely suppressed in the Jewish Supremacist mass media which is directed at non-Jews. In fact, the only way anyone would even hear about the “deal” would be if they read the Jewish media directed at Jews—because in those publications, they can barely contain themselves with glee over this latest maneuver.

For example, in the Israeli business news magazine, Globes, the “deal” was announced as “Israel to buy 2nd F-35 squadron” and went on to tell its readers that:

Despite the diplomatic tension with the US, Israel will purchase a second squadron of F-35 stealth warplanes, and will also complete its purchase of its first squadron, after having originally bought 19 of the planes.

Just to remind its (Jewish) readers of where the money was coming from, Globes proudly added:

The US approved $3.1 billion in military aid for Israel, at a time when Washington is cutting back on its military aid to other countries . . . Minister of Defense Moshe Ya’alon met with US Secretary of Defense Chuck Hagel last week during his visit to the US. They discussed procurement matters for this year and planning of the Israel Ministry of Defense budget. In addition to the US commitment to military aid to Israel, Ya’alon and Hagel also discussed increasing the aid, starting in 2017. At the same time, sources in Jerusalem predicted that the volume of aid would not change as long as President Barack Obama was still in the White House.

In addition to warplanes, Hagel also approved the IDF’s continued procurement of US-made precision and smart weapons, and continued US support for special development and procurement projects for 2015, including the Iron Dome, David’s Sling (also called Magic Wand), and Arrow 3 aerial defense systems, as well as the Namer APC. 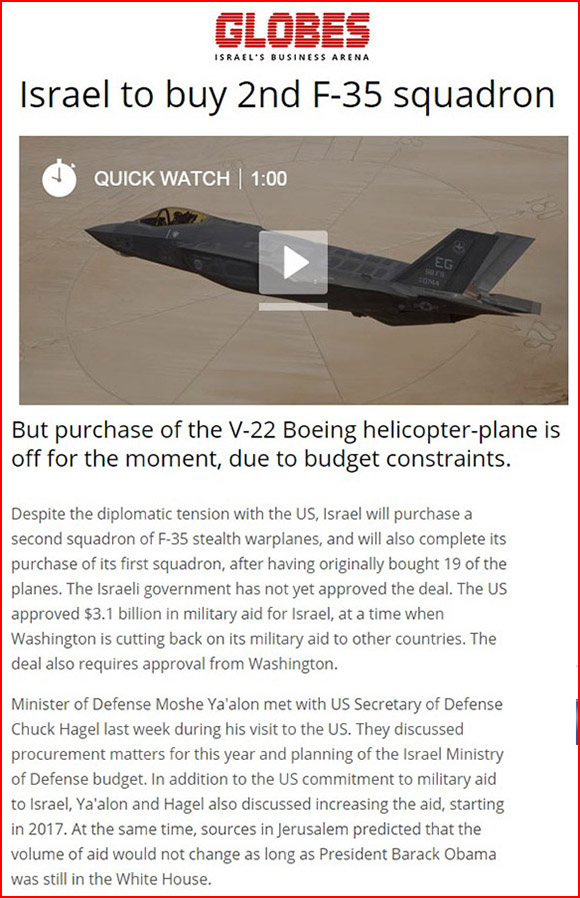 As if this was not enough, Globes continued to boast, the “deal” also includes guarantees that some of the assembly work will be carried out by Israeli firms—which means that even more taxpayer money will be sent to Israel, separate from the “aid” allocation already made.

According to Globes, the company Israel Aerospace Industries Ltd, based in Israel:

This is possibly one of the largest foreign military arms deals of recent times for the Lockheed Martin company which manufactures the F35 jets—possibly the most advanced fighter aircraft on earth—and the fact that the controlled media has blacked out the news of the “sale” to Israel, speaks volumes all by itself.

About the only other place where one might be able to read of this incredible “deal” is in the Israeli news source YNet News. There, an article announced that:

Israel bought 19 F-35s for $2.75 billion in 2010, with delivery scheduled between 2016 and 2018. Defense Minister Moshe Ya’alon, visiting the United States last month, agreed a preliminary deal for 25 to 31 more planes subject to approval by the ministerial committee for defense purchases, sources said.

According to YNet News, some in the Israeli government are even having second thoughts—not because of any other consideration apart from the fact that they will not make enough money out of the deal.

According to Ynet News:

The Israelis are also husbanding a defense budget which, though buoyed by some $3 billion in annual US grants, faces cuts.

Other concerns include the fact that the jet’s electronic systems are American-made, and Israel will not be able to equip it with Israeli-made systems. This would also have ramifications on exports of the Israeli Military Industry to foreign air forces.

In other words, the Israelis also intend to sell the technology—perhaps to its traditional arms client, Red China—and Lockheed Martin’s desire to prevent this obvious swindle has upset their Jewish clients.

Ironically, the YNet News article—directed, it must be remembered, primarily to Jewish readers—openly admitted where all the money for the jets will come from:

While most of the funding for the planes will come from the $3 billion worth of American military aid package, the ministers said such a purchase will essentially mortgage the aid package on the expense of other purchases.

Next Post Fantastic Show! “Why Does America Send Money to a Nation that Attacks US?”