An amazing about-turn by the largest Jewish lobby in Washington, the American Israel Public Affairs Committee (AIPAC) on the question of sanctions against Iran, has led some to speculate that the Zionist extremists have suffered their second major political defeat in less than six months. 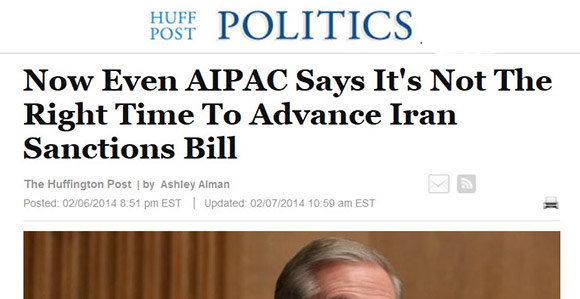 The announcement by AIPAC that it was withdrawing its support for the “Nuclear Free Iran Act”—which it had previously backed to the point of threatening Congressional non-supporters with political re-election blocking campaigns—was interpreted by the Huffington Post, for example, as a “completely reversed course on the issue. For months, the group had been lobbying lawmakers hard to push the Iran sanctions bill, even launching an attack on one of its biggest allies, Rep. Debbie Wasserman Schultz (D-Fla.), for not supporting it.”

The Huffington Post goes on to quote a “Senate Democratic leadership aide” as saying that “As usual, Republicans overplayed their hand and it backfired’” Of course, what they actually meant was that the Jewish lobby had overplayed its hand, not the Republicans.

This turnaround appears to be the second major defeat suffered by the Jewish lobby in its ongoing efforts to influence American foreign policy in favor of Israel. The previous effort was the attempt to drag the United States into a war with Syria, which also came unstuck—and possibly for the same reasons.

These reasons are simply that the Internet has been able to bypass the Jewish Supremacist media control and enough people of importance have been exposed to the facts about Iran’s mythical “atom bomb” (and also the truth about Syria’s “chemical weapons attack” which has now been shown to have been carried out by the US and Israeli-backed rebels) that popular resistance, even among traditionally left-leaning American politicians,  to the Jewish Lobby has reached such levels that it is no longer an easy ride to manipulate the US body politic as before.

However, no-one must be under any illusion over the power of the Jewish lobby in Washington DC—it is merely a split between “leftist” Zionists and “rightist” Zionists, and the only real policy difference between the Obama administration and AIPAC is how best to advance Jewish Supremacist interests—not if they should be advanced, but only how best to advance them.

This is the important lesson to learn from the latest AIPAC policy reversal—that no matter what they do, it is never in America’s interests, but always in Israel’s favour—which, by definition, is harmful to the US and the free world.