By Ron KampeasAugust 11, 2015 5:51pmWASHINGTON (JTA) — The dredging up of the dual loyalty charge — that lawmakers who reject the Iran nuclear agreement and the American Israel Public Affairs Committee, which is lobbying against it, are more closely aligned with Israel than the United States — illustrates just how tense the debate over the deal has become. 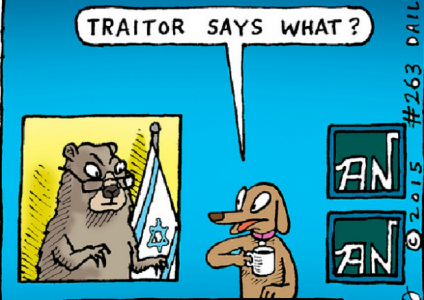 The charge came to the fore after Sen. Charles Schumer, D-N.Y., the highest-ranking Jewish Democrat in the Senate, announced last week that he was opposing the deal reached July 14 between Iran and six world powers. A weekly cartoon on Daily Kos, a liberal website, depicted Schumer as a woodchuck, and in the course of a TV interview, the flag in the woodchuck’s office changes from American to Israeli and the moderator, a basset hound, calls Schumer a traitor. The cartoonist, Eric Lewis, has had drawings published in the New Yorker.

The cartoon has drawn outraged responses.

“There is room for a legitimate debate on the Iran deal, however charges” of disloyalty “against Senator Schumer — and any other members who articulate on fact-based but alternative views — are beyond inappropriate,” Jonathan Greenblatt, the new national director of the Anti-Defamation League, told the Times of Israel.
Click here for the full story

JERUSALEM (JTA) — Israel’s Supreme Court has ruled that illegal migrants can only be held in a Negev detention facility for 12 months while a law is revised.

The provision in the current “anti-infiltration law” allowing the migrants to be held for up to 20 months at the Holot detention center is “disproportionate,” the court said.

The Knesset has six months to revise the law, which passed its final readings in December.

Several Israeli nongovernmental organizations have petitioned against the law.
Click here for the full story

Hacktivist collective Anonymous has attacked scores of Israeli official websites over the release of the suspects in an arson attack on a Palestinian home that killed a baby and his father.

Some 54 Israeli websites, including those of the prime minister’s office, the Israeli military, and foreign and finance ministries, were offline or experiencing technical problems for up to 12 hours after the attack, the Middle East Eye online news portal reported on Tuesday.

Following the attack, Anonymous announced in a statement that their attack was in response to a decision by the “criminal state” to release the arson suspects.

On Monday, Tel Aviv released all those who had been held in connection to the Israeli settler firebomb attack on a Palestinian house in the village of Duma in the West Bank on July 31.

An 18-month old baby, Ali Dawabsheh, was burnt to death in the attack and his father, Sa’ad Dawabsheh, succumbed to his injuries last week.

Settlers, mostly armed, almost regularly attack Palestinian villages and farms and set fire to their mosques, olive groves, and other properties in the West Bank.

Israeli settlements are considered illegal by much of the international community because the territories were captured by the regime in a war in 1967 and are hence subject to the Geneva Conventions, which forbid construction on occupied lands.
Click here for the full story

JERUSALEM (JTA) — Israel Police questioned the head of the Lehava anti-coexistence group, days after he said he supports the burning of churches and mosques.

Rabbi Bentzi Gopstein was released on Tuesday after being asked “about his comments regarding the burning of churches,” a police spokesman told the French news agency AFP. Gopstein has not been linked to any recent attacks.

The rabbi made the statement during a symposium on the topic of halachah, or Jewish religious law, a recording of which was later published on the website of the haredi Orthodox news website Kikar Hashabbat.

Lehava opposes intermarriage and joint Jewish-Arab initiatives. Members of the group staged a protest in December against a marriage between a Muslim-Israeli man and a Jewish-Israeli woman. The group also protested the Jerusalem gay pride parade last week, where a lone attacker stabbed six marchers, killing a teenage girl.
Click here for the full story

NITZAN B, Israel (JTA) — Ask Aviel Eliaz and Itzik Wazana about their evacuation from Gaza 10 years ago this month and both will tell you it’s like a tree.

For Eliaz, it’s an olive tree sitting in a large pot in his front yard. He planted the tree in 2000 at his former home in the Gaza settlement of Nisanit, only to uproot it when Israel withdrew from the coastal strip. Uprooted, too, were the strip’s 8,000 residents.

His family was resettled along with hundreds of others in this city of cheap plaster prefab houses further up the coast. Eliaz stuck the tree in a pot, figuring he would replant it once he moved into the permanent house the government promised him. Ten years later it’s still there, its growth stunted and its branches thin.

“This is an ongoing trauma of 10 years of temporary life,” said Eliaz, head of the local council that governs Nitzan B. “We live in waiting. That’s how my kids feel. They’re waiting. They don’t have roots. When will we get a home? Will we get a home? We see the light at the end of the tunnel, but there were times we didn’t.”
Click here for the full story

“Overstating the case for the agreement belies the gravity of the issue and does more to breed distrust than win support,” the former New York mayor, now reinstalled at the helm of his media empire, said Tuesday in a Bloomberg column.

Obama in an interview with NPR on Tuesday said the deal was the best guarantee of keeping Iran from obtaining a nuclear weapon.
Click here for the full story

Rivlin to GOP congressmen: Israel will defend itself against Iran

JERUSALEM (JTA) — Israeli President Reuven Rivlin told a delegation of visiting Republican Congress members that Israel “can and will do all that is necessary to defend itself” in the wake of the Iran nuclear deal.

“Along with Israelis on all sides of the political spectrum, I am deeply concerned about the recent nuclear deal signed with Iran,” Rivlin told the group at a meeting in Jerusalem on Tuesday morning. “We stand together in a partnership, established on the strong foundations of common values, and a shared vision, deeply rooted in democracy, the values of liberalism, and human rights for each and every citizen.”

Rivlin called Israel’s allies, including the United States, “a strategic cornerstone for us.” He added: “The U.S.-Israel relationship has known ups and downs. We must not be alarmed by disagreements when they arise. Whatever Congress decides, it will be your decision as representatives of the American people. We, as your allies and partners, must make sure that whatever the result of this vote, our strategic alliance stands and grows even stronger.”
Click here for the full story

Palestinians are set to hold separate demonstrations in the Gaza Strip to voice their anger at a decision by the UN Relief and Works Agency for Palestine Refugees in the Near East (UNRWA) to cut its services in the Israeli-besieged territory.

On Monday, Mahmoud Khalaf, from the Democratic Front for the Liberation of Palestine (DFLP) Party, said Palestinian factions have agreed to rally next Monday in front of the UNRWA headquarters in Gaza City.

According to Khalaf, Palestinians also plan to stage several sit-ins outside UNRWA offices and inside the schools that the UN agency runs in refugee camps across the impoverished coastal sliver.

Khalaf described the planned UNRWA cutbacks as “unjust,” saying the move is part of a plot to undermine the inalienable right of the Palestinians to return to their homes and property, from which they have been uprooted.

He said that “the alleged financial crisis in UNRWA” had been made up as a pretext to shut down the UN agency that has been looking after Palestinian refugees in the Middle East for 65 years, and to abolish Palestinian refugees’ right to return to their homeland.

Honor thy father and mother, says the Torah. In the case of the sons of convicted spies Julius and Ethel Rosenberg, that means requesting a presidential pardon.

Brothers Michael and Robert Meeropol penned an op-ed in the New York Times Monday asking President Barack Obama to acknowledge that their mother, Ethel Rosenberg, was wrongly convicted and executed for conspiracy to commit espionage in 1953.

Ethel Rosenberg and her husband, Julius Rosenberg, were at the center of one of the most controversial spy cases of the 20th century and were victims, many say, of the zealous overreach of Senator Joseph McCarthy’s anti-communist crusade.

While the brothers did not dispute their father’s culpability in their op-ed (“Scholars mostly agree,” they wrote, “that Julius was a spy”), they made a case that their mother, though likely aware of Julius’ activities, was not an active conspirator.
Click here for the full story

The Israel regime has built a nightclub on a historic Muslim cemetery in East al-Quds (Jerusalem) which houses the remains of some companions of Prophet Mohammad (peace be upon him) and prominent intellectuals.

News reports indicate that Israeli forces have already opened a club and café built on part of the land, which has been stolen by Israelis, of the Islamic cemetery of Ma’manillah in the occupied Old City of Eat al-Quds (Jerusalem).

The latest move is considered as part of the Israeli policy of accelerating Judaization and desecration of Islamic landmarks in the historic city.

The Arab League in a statement on Monday described the Israeli construction as a “grisly crime.”
Click here for the full story

People in Britain have been signing a petition that calls on the government to arrest Israeli Prime Minister Benjamin Netanyahu upon his arrival in the UK next month.

The petition entitled “Benjamin Netanyahu to be arrested for war crimes when he arrives in London” is available at a petitions website set up by the UK government and parliament.

“Benjamin Netanyahu is to hold talks in London this September. Under international law, he should be arrested for war crimes upon arrival in the UK for the massacre of over 2,000 civilians in 2014,” the petition reads.

More than 26,000 people had signed the petition until GMT 1100 on Monday with the number of signatures dramatically on the rise.

The British government is expected to respond to the demand as all petitions that get more than 10,000 signatures should be seen into, according to law.
Click here for the full story