Political observers are unanimous that the Zionist Supremacist-controlled U.S. Government and their Jewish-lobby puppet masters have been wrong-footed on the international stage by the Syrian government’s offer to give up its chemical weapons–because it highlights the fact that Israel has these weapons as well. 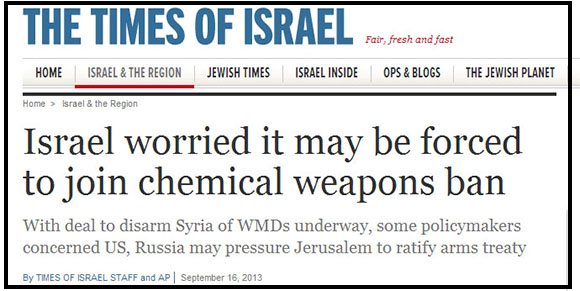 The realization of this truth has forced the Zionists to break out in panic. Even the pro-Jewish Times of Israel has blurted out in a new article that “Israel [is] worried it may be forced to join chemical weapons ban.”

According to that Jewish newspaper, the “deal to strip Assad of his chemical weapons stockpile has some policymakers in Jerusalem concerned that Israel may be forced to sign an international chemical weapons ban treaty, something it has been unwilling to do until now.”

Israel has always refused to ratify the Chemical Weapons Convention on the basis that “there is no significance to being part of an agreement like this while a neighboring country like Syria possesses a vast stockpile of chemical weapons,” the Times of Israel reported.

Neither Syria nor Egypt signed the CWC, and both have active chemical weapons programs.

Israel is now “concerned” that the deal to destroy Syria’s chemical stockpile “may force Israel to ratify the treaty.”

As a party to the CWC, Israel would be forced to permit international inspectors access to the Dimona nuclear reactor and the Nes Ziona Biological Institute–the two centers of the Jewish supremacist weapons of mass destruction.

According to a CIA document published in Foreign Policy magazine, US spy satellites in 1982 uncovered “a probable CW (chemical weapons) nerve agent production facility and a storage facility… at the Dimona Sensitive Storage Area in the Negev Desert.”

The Syrian government has, thought a judicious use of the international diplomatic chain, turned what was an excuse for an attack on that nation, into a highly embarrassing political debacle for Israel.

At the same time, Syria has set the stage for the final destruction of the “rebel” terrorists–and that is also something that the Zionist lobby wanted to avoid at all costs.