By Dr. Patrick Slattery — The internet site Firedoglake.com has been keeping tabs on the media pronouncements that members of the House of Representatives have made regarding their intentions whether or not to support President Obama’s call to bomb Syria.

Half of the 22 Jewish members of the House have already voiced their support of the bombing resolution, with another six not yet having revealed their intentions.

By contrast, less than 10% of the 338 White European House members have indicated they will support Obama war push, while 65% (219) have voiced their opposition.

If these 219 stick to their positions, the Syrian war resolution will fail. As for the 40 black members, 9 support war, 10 oppose it, and the rest are heeding the Congressional Black Caucuses advice not to reveal their intentions.

Of the 25 Hispanic representatives, 6 support war, 9 oppose it, and 10 have yet to reveal their intentions. One Asian member supports war, five oppose it, and three have kept mum. 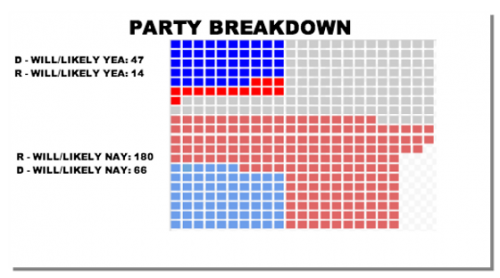 AIPAC’s big push for war so far seems not to be having much success. Other than motivating a few Jewish and reliable Sabbath goy House members to reveal their intentions, the Zio-lobby’s war cries are falling on deaf ears.

This could be seen as something of a Congressional revolt. While Jewish money can usually keep Congress moving in lock step with Zionist interests, constituents are making it known that they do not want yet another war, and this time Congressmen are listening.

Most members of the House of Representatives do not face well-funded opponents and thus are easily re-elected, so keeping on good terms with the Zio-lobby is usually a must. However, the Jews will not be able to pour megabucks into hundreds of otherwise safe Congressional elections. There is safety in numbers.

Secondly, constituents are making themselves clear that they do not want to embark on yet another war. A decade after the vote to authorize the Iraq War the public still remembers how members voted, and many Congressmen feel they could be vulnerable next year if they ignore the wishes of their constituents.

Finally, party politics plays more than its share. White Democratic House members are more likely than their black and Hispanic colleagues to speak out against the war resolution, but it is white Republicans who are mobilizing in droves.

This is the same faction that formed the bulk of the Congressional support for the two wars against Iraq. It is hard to imagine that they would not support a war if it were being launched by a President Romney.

Indeed, if Obama were making a national interest argument instead of a humanitarian one, he would likely get more support from Republicans.

Still, it will mark an important defeat for the Zio-lobby if their war resolution gets shot down in the House in a lop-sided vote. But one thing is for sure: they will not give up their push for war with Syria and ultimately Iran, and will resort to other, perhaps more treacherous, machinations.