Commentary by Dr. Patrick Slattery — Professor Jeffrey Sachs, formerly of Harvard and now at Columbia, stated in a televised interview that “She better change because there has been a disaster in Libya, Syria, she has always gone for the war approach. That’s what Benghazi has shown.” What’s more, he said that the vote for Brexit and the support for Trump are people saying “stop immigration, we don’t believe the elites have been fair, and we don’t think globalization is a good deal for us.” And he says that “refugees are destabilizing politics everywhere as well.”

So who is Sachs voting for? Hillary! I guess he doesn’t consider war and immigration top priorities. What might his top priority be? How about “what’s good for the Jews.” After the dismemberment of the Soviet Union the Sachs went to Moscow to advise the Russian government on the “shock therapy” rapid privatization of state assets. In short order, the bulk of the economy was in the hands of young Jewish oligarchs who had connections both to ethnic Jews in the Yeltsin administration like privatization chief Anatoly Chubais, Deputy Prime minister Boris Nemtsov, and Prime Minister Sergey Kiriyenko as well as to international Jewish financiers like George Soros, in what was certainly the biggest robbery in human history. Thanks Professor Sachs!

Keep that in mind when you watch the video from the “Morning Joe” show in the linked article below. After Sachs gives a very articulate summary of the disaster of the Hillary-led policy of trying to topple Syrian President Assad rather than opposing ISIS, he blurts out that he is voting for Hillary anyway. When challenged by one of the panel members why he wouldn’t vote for Trump, he simply stammers that he is “unstable” in other ways. In other words, Trump is not good for the Jews. 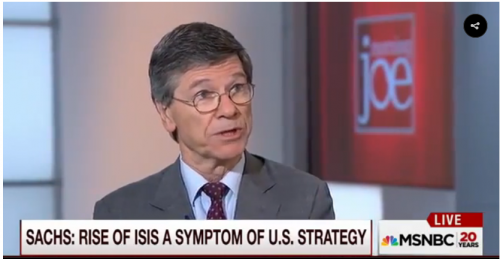 Jeffrey Sachs: Clinton “Had Better Change” Her Foreign Policy, Syria Has Been An “Utter Disaster”

“The politics of the Brexit is pretty much similar to the politics of Donald Trump,” Sachs said. “It is similar to the politics of [French National Front leader] Marine Le Pen. France, and in fact all over Europe, you have parties in government, or knocking on the door of government, who are essentially saying: ‘stop immigration, we don’t believe the elites have been fair, and we don’t think globalization is a good deal for us.’ So this is pretty much across the board in the United States and Europe.”

“ISIS fits in here in one very particular way, which is this flood of refugees, millions that have been displaced in Syria. I’ve been saying for five years that the U.S. attempt to overthrow Bashar al-Assad was totally destabilizing, and a tragedy… ISIS could easily be defeated, but everyone, including the United States has not put that as a priority. The U.S. priority in Syria has not been to defeat ISIS, it has been to overthrow Assad. That has created chaos.”

“Nobody has focused on defeating ISIS because everyone is fighting different wars… U.S. foreign policy has created a disaster. And I have to say… We made a mess there in Syria, and now it spills over into all our politics. Because it is true that the refugees are destabilizing politics everywhere as well.”

“So who do you agree with [in the election]?” asked NBC’s Nicolle Wallace. “Clinton will continue that foreign policy and Trump is the isolationist?”

“I think Clinton has played a terrible role –and I’m voting for her– but she better change. She better change because there has been a disaster in Libya, Syria, she has always gone for the war approach. That’s what Benghazi has shown.”

Trump is “so unstable in so many other ways,” he said, revealing his former enthusiastic support for Bernie Sanders. “I couldn’t vote for [Trump]. But on foreign policy, Hillary’s record is just terrible.”

Next Post Are Whites or Blacks more Likely to be Shot by Police ? The Shocking Truth!