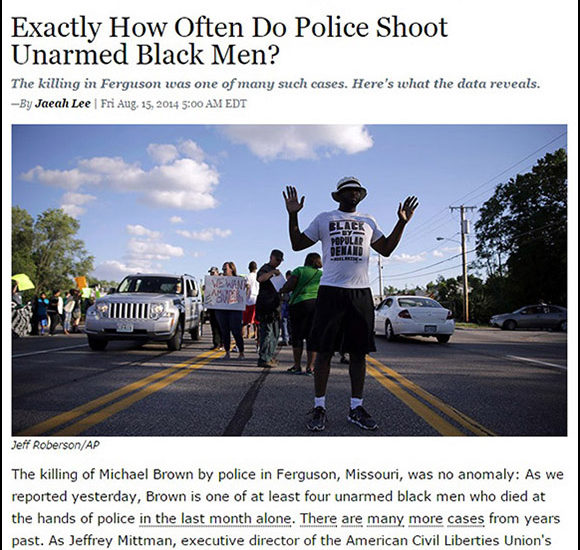 The ongoing unrest over the Ferguson-Michael Brown incident—which has now spread countrywide—has allowed the Jewish Supremacist dominated media to once again launch a barrage of articles claiming that European-Americans are somehow inherently racist towards African-Americans—and that this “culture of racism” is so pervasive that it even results in the mass shootings of unarmed black civilians by “racist white police.”

A typical recent such article was published in the online journal Mother Jones. Its title, “Exactly How Often Do Police Shoot Unarmed Black Men?” sets the tone for the entire screed, which includes numerous quotes blaming alleged racism by the police, the court systems, and basically everybody else who is white. 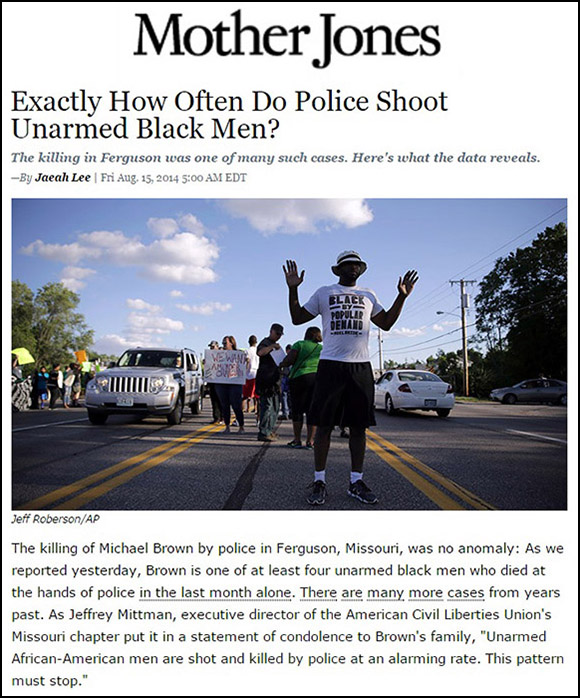 Mother Jones is a self-described “progressive” journal, which is actually the news outlet of something called “The Foundation for National Progress” or FNP. It will come as no surprise to hear that the FNP in turn is funded by the well-known Jewish Supremacist George Soros, through his “Open Society Foundations.”

It will also come as no surprise to hear that the publisher of Mother Jones is yet another Jewish Supremacist, Steve Katz.

As part of its attempts to blame European Americans, the Mother Jones article quotes several official authorities, such as the NYPD Firearms Discharge Report, 2011, and then goes into say that:

When you look at the racial breakdown of New Yorkers, black people are disproportionately represented among those targeted as criminal shooting suspects, firearms arrestees, and those fired upon or struck by police gunfire.

In fact, blacks have vastly disproportionate, dramatically higher rates of violent crime. In fact, African Americans commit are over 700 percent, (6 times) more likely to commit violent crimes than than are European Americans. Black people are not “targeted as criminal shooting suspects,: they are the  vast majority of criminal shooting suspects. Meaning they are have been identified and charged, or identified and sought for shooting a criminally shooting a firearm in a crime.  The authorities keep very strict racial records by both assailant and victim.

It should be noted that the NY police authority is by far the largest in the United States and encompasses over 9 million people. The Jewish-owned Mother Jones uses their figures to show Police bias in shooting Black people when it really shows the direct opposite.

The shocking reality, as revealed in the article’s own graph, is completely the opposite.

As the figures show, it is blacks who are far less likely to be fired upon or hit by police gunfire in proportion with their criminal activities, and, astonishingly, according to the official statistics, there are no—zero—recorded incidents of white suspects actually firing guns at the police, while nearly 70 percent of all shots fired at the police in that city came from gun-wielding black people and the rest from Hispanics. So, even though not a single white suspect fired at any police officer, 44 percent of those killed by police were white!

No-one can deny that blacks commit a massive disproportionate level of violent crime in contrast to their population…and the reality is that police shoot white suspects in vastly great per capita proportion than they do black suspects.

Take a look at the Mother Jones article which stupidly reveals the own blind anti-white racism in their own charts and stats. 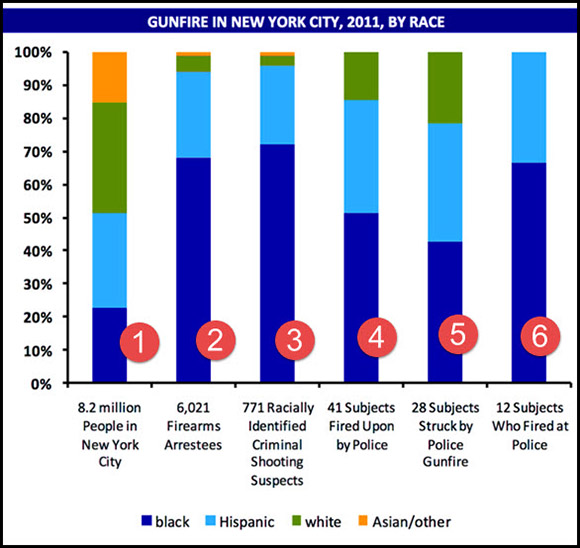 The six columns in the chart shown above for 2012 show the following:

2. It shows that although blacks are under 25 percent of the population they are almost 70 percent of those arrested for firearms violations.

3. It leaves out the vastly higher violent crime rate, but does show that blacks were well over 70 percent of the totaled 771 criminal shooting suspects!

4. It shows that only 41 of these shooting suspects were fired upon by the police.

4b. Even more amazingly, whites, who are less than three percent of the shooting suspects, were 15 percent of those fired upon by police.

5.  It shows that only 28 suspects were struck by police gunfire.

5a. Whites, only three percent of shooting suspects were over 20 percent of the ones struck by police gunfire.

5b. Blacks who were over 70 percent of the identified shooting suspects were only 45 percent of those struck by Police gunfire.

As can be seen from the official statistics of NYPD, MORE whites are shot by the police than blacks! The EXACT OPPOSITE of what the media is claiming.

The facts therefore, show clearly that the claims by the Jewish Supremacist-controlled media are simply lies.  However, they would rather put this disinformation out, than report on the only true racism: that of Jewish Supremacism.

When, it might be asked, will Mother Jones do a report on Israel’s banning of marriages between Jews and non-Jews?

When, it might be asked, will Mother Jones do a report on Israel’s use of DNA tests to screen potential immigrants for racial purity before allowing them into their “holy land?”

When, it might be asked, will Mother Jones do a report on Israel’s policy of arresting, detaining and deporting all African asylum-seekers?

When, it might be asked, will Mother Jones do a report on the vicious anti-Gentile outbursts by all manner of top religious and political leaders in Israel?

When, it might be asked, will Mother Jones do a report on why all official Jewish organizations in America support Israel—and all its policies—while demanding that the US adopt the exact opposite policies here at home?

Don’t hold your breath waiting for the Mother Jones expose on Jewish Supremacist racism: they, and the other Zio-controlled media only have an interest in fermenting hatred against European-Americans.

RECAP: It is not just Mother Jones that is presenting this damnable lie about white “racist” police shooting down Blacks. The mainstream Zio media is full of headlines suggesting that blacks are being shot down by white police when the the truth that police are far more likely to shoot down and kill white criminals than Black criminals. Yet, even though the facts are clear the mainstream Jewish media promotes this lie incessantly.

The truth is that the lies promoted by the mainstream, Jewish dominated entertainment destroys thousands of times more lives than cases such as Michael Brown. Millions of young white people are led into drug abuse, alcohol abuse, sexual abuse and disease, and violence — by a media that drenching our kids in blood. Gangster rap and the gangster, drug and violence lifestyle has become a role model for millions of blacks and whites in America, all promoted by the Jewish run record and entertainment industry. That is the real killer of both African American “teens” and whites alike.

In fact, the hatred against a white policemen, the gangster actions of Michael Brown in the physically violent robbery of the Ferguson store just minutes before the confrontation with Darren Wilson, can certainly be associated with the ziomedia climate of hate instilled against European Americans and the police.

Next Post Dr. Duke Exposes the Raging, Vicious War Being Waged Against Whites in America & the World!