Gilad Atzmon brought an interesting news item to our attention last week in his article “Pope Francis, Alison Weir and the Sanhedrin.” The Sanhedrin, an authoritative council of rabbis, has revealed that they will try Pope Francis in absentia for his anti-Semitic crimes of having the Vatican recognize a Palestinian state and objecting to the claim that Jews have a god-given right to Israel. This is the same religious body that, according to the Talmud, tried Jesus Christ and sentenced him to death. 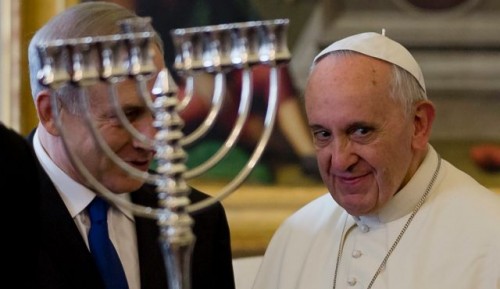 When three decades ago Ayatollah Khomeini issued a fatwa against Salman Rushdie for his book “the Satanic Verses,” the Zio press was full of outrage and remained full of outrage for years. Don’t expect to hear much about this Jewish trial of the man Catholics revere as God’s representative on earth.

The fact is that the Zio press goes beyond double standards and hypocrisy. Islam is always portrayed as violent and irrational. The Catholic Church is portrayed as pedophilia central. Yet Judaism is unblemished.

Forget the fact that rabbis have their own massive pedophilia problem. Indeed, the Talmud actually sanctions it. Forget that the Jewish State of Israel has been engaged in an incredibly violent program of genocide against Palestinians that is very much sanctioned by the Jewish religious establishment. Forget also that the Jewish calendar is full of holidays celebrating genocides against Israel’s ancient enemies.

Judaism is given a free pass because Jews have infiltrated and now dominate so many important institutions in Western countries. Our political institutions, our banks, our media, our press, and even our churches are to a large extent under Jewish domination.

Christian Zionists will pray for Israel and even shell out a few shekels to subsidize Jews-only settlements in what little remains of land where Palestinians still dwell. Mainstream protestant clergy will engage in “interfaith dialog” with rabbis, as if there is some common ground between Christian universal values and Jewish tribal particularism. Even the Vatican will continue to kowtow to Israel and the Jewish lobby.

One may well ask how much the Zio press pursuit of some spurious connection between Pope Benedict and homosexual pedophilia in the priesthood had to do with his resignation, unprecedented in seven centuries. One might also wonder whether Pope Francis, whose Zio-friendly progressive tendencies have been touted in the Zio media, has his own days numbered.

Catholics around the world, and indeed all Christians, should be outraged that Jewish religious authorities would “try” Francis for simply acting in accordance with international laws and norms of morality. And we all should wake up to the reality that we live in a society where the goyin within the political, religious, and media elite will sit on their hands and let such an outrage occur.