Commentary by Dr. Patrick Slattery — I know I supported Trump and I know the Trump administration is completely floundering. Our God Emperor has gotten off to a pretty miserable start. Lots of people are going to say he was a Zionist shill from the get go. But I say lets look at some facts.

I could go on and on, but the fact is that the Zionists and their puppets have hi-jacked our foreign policy and are trying to regime change Russia, and are willing to risk World War III to do it.

Did you know that the Pentagon was built in a swamp? And this is exactly the swamp that Trump needs to drain, starting with General Mattis. Obviously, General McMaster has to go, too. Trump should replace them with Tulsi Gabbard and Dennis Kucinich. Or Paul Craig Roberts and Pat Buchanan. Or Ron and Rand Paul. Or David Duke and myself.

Forget that. I have an idea. Trump should just become a puppet of Vladimir Putin. If he is going to be accused of being a puppet anyway, then why not? It’s like when your wife accuses you of having an affair, you might as well have one.

Think of all the bonuses. Putin is really smart. The Jews have been trying to get rid of him for at least a dozen years, and he just keeps getting stronger. He has made life immeasurably better for his people. They are not being replaced by immigrants. They are not being gayified. Yes, President Trump, please become a puppet of Vladimir Putin. It’s the only way to Make America Great Again. 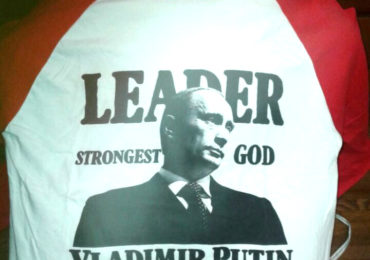 And if you act now, I have a great shirt that will go together perfectly with your MAGA hat.

But seriously (although I would be seriously okay with Trump taking advise from Putin), I think it’s clear that Trump did not order the shooting down of the Syrian air force plane. Moreover, the Pentagon has completely capitulated to the Kremlin’s warnings about behaving itself if it doesn’t want its plane shot down. That, I believe, was Trump’s decision. Last year the Pentagon undermined President Obama’s attempt at a cease fire in Syria by bombing a Syrian military base “by accident.” Obama was too much of a weakling to stand up to this kind of mutiny. We will see whether Trump, faced with impeachment proceedings, stands up for himself.

A day after a Russian fighter allegedly flew within 5 feet of a US reconnaissance plane traveling over the Baltic Sea, Reuters reports that a NATO F-16 fighter jet returned the favor when it tried to improperly approach a plane carrying the Russian defense minister. The plane was traveling to the city of Kaliningrad, a Russian enclave along the Baltic coast, where Defense Minister Sergey Shoigu was scheduled to discuss security issues with defense officials on Wednesday. The NATO aircraft was warded off by a Russian Su-27 jet, according to RT.

In an accounting of the incident, Reuters notes that one of the Russian fighter jets escorting Shoigu’s plane had inserted itself between the defense minister’s plane and the NATO fighter and “tilted its wings from side to side to show the weapons it was carrying, Russian agencies said.” After that the F-16 promptly left the area.

A clip of the encounter was caught on tape by Russian journalists:

Kremlin spokesman Dmitry Peskov said that he has no information about the incident.

The latest provocative maneuver represents yet another escalation of tensions between the US and Russia. On Monday, Russia suspended cooperation with the US in Syria under the “memorandum of incident prevention in Syrian skies”, warning that its missile defense would intercept any aircraft traveling in Russia’s area of operation after a US fighter jet shot down a Syrian regime aircraft on Sunday.Russia slammed the US for shooting down the jet, calling the attack an “act of aggression” and claiming that the move benefited terrorists in the area. The Syrian regime says its jet was pursuing a fleeing ISIS convoy around the time it was shot down.  US officials claimed they tried to contact its Russia counterparts via an established “de-confliction line,” though Russia has denied this, saying that if the US had reached out, the incident could’ve been avoided.

A US jet also downed a pro-regime drone on Monday in what Connecticut Sen. Chris Murphy described as a “dangerous escalation” of tensions between the US and pro-Syrian regime powers like Iran and Russia.   “I think we’re getting closer and closer to open conflict between Iran and Russia and the American public need to know that we are moving very fast towards what could be another war in the Middle East – something Donald Trump promised he wouldn’t do when he ran for office.”

As RT notes, encounters between US and Russian warplanes over the Baltic are becoming more frequent. A Russian fighter jet intercepted a small group of US warplanes, including Boeing KC-135 Stratotanker military refueling aircraft, two B-1 bombers and one B-52, during a BALTOPS (Baltic Operations) annual training exercise on June 10.

Previous Post Dr. Duke Exposes the Surrogate anti-Trump Atlanta Election — It’s about One Thing – Jews and the Zionist Ultra-Racist Control of the USA!