Confirmation that the Jewish lobby in Britain controls the electoral process in exactly the same way is does in the US, has once again come with the news that the Labour Party—Britain’s version of the US’s Democratic Party—is facing a crisis because of a withdrawal of Jewish funding.

Unlike the US, however, the UK media—also under the domination of the Jewish Lobby—feels free enough to openly report upon their important role in controlling the electoral process. For example, an article in The Independent newspaper openly declared in a headline that there is a “Labour funding crisis: Jewish donors drop ‘toxic’ Ed Miliband.” 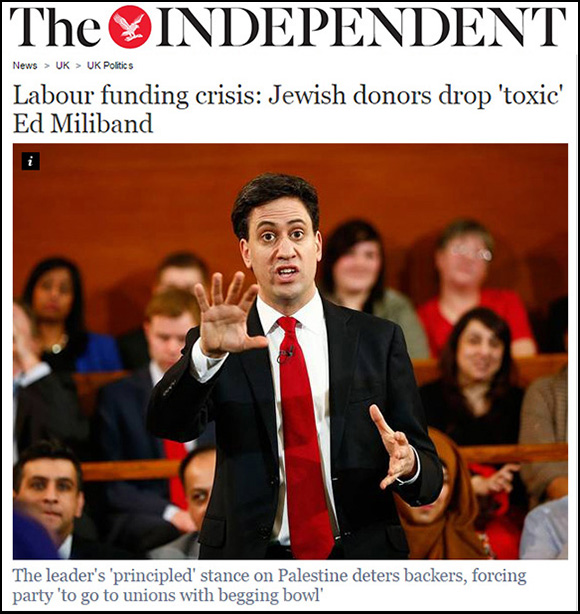 Although Ed Miliband is Jewish, he is of the old school Marxist-type Jews, many of whom have fallen out with the more overtly nationalist Zionist Jews. As a result, Miliband has, from time to time, expressed his disquiet with the human rights abuses committed against Palestinians by the Jews-only racist state of Israel.

Although Miliband’s party—of course—campaigns against what it calls “racism” (and by that they mean only European “racism”) they never dare say a word about the racism rampant in Israel.

Despite this, Miliband’s guarded and carefully-chosen comments about the treatment of Palestinians has been enough to alienate major Jewish donors to his party, plunging it into the “funding crisis” to which the Independent refers.

According to The Independent:

In a fresh headache for the Labour leader, it is understood that Mr Miliband has been warned that Jewish backers are deserting the party in droves over what community leaders perceive to be a new, aggressive pro-Palestine policy at the expense of Israeli interests.

In reality, Miliband has not deserted Israel at all, but, in the worldview of Jewish Supremacism, even expressing a small element of sympathy for the suffering of the Palestinians is enough to drive the Zio-fanatics into a rage.

At a speech to the “Labour Friends of Israel” in June this year, for example, Miliband ended his speech with the following words:

I want you to know that if I become Prime Minister in less than a year’s time, I will be proud to do so as a friend of Israel, a Jew and, most of all, someone who feels so proud to be part of the community gathered here today. 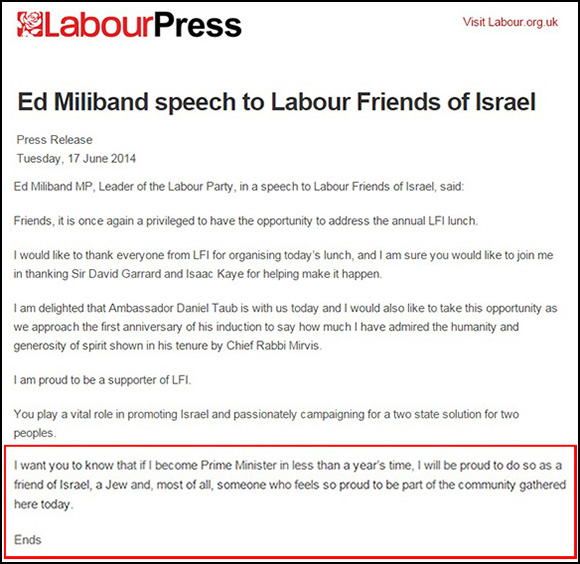 This is however, obviously not enough, as The Independent explained:

A senior Labour MP warned that Mr Miliband now had a “huge if not insurmountable challenge” to maintain support from parts of the Jewish community that had both backed and helped fund Tony Blair and Gordon Brown’s election campaigns.

Donations from the Jewish community have been worth hundreds of thousands of pounds a year to the Labour Party. Several previous donors told The Independent on Sunday that they and others are now very unlikely to support the party.

A number of Jewish former Labour supporters also compared Mr Miliband’s stance on Gaza unfavourably with David Cameron’s, which, they suggested, had been calibrated to ensure that prominent Tory Jewish supporters stayed on board.

There are two important lessons to be learned here: