Even though the defeat of Jewish Supremacist Eric Cantor in this week’s primary in Virginia is, according to major Jewish leaders, a “severe blow” to Jewish interests, any thought that Americans would now be given a real choice about his replacement has been destroyed with the revelation that the Jewish lobby has already lined up his replacement.

According to an article in the Israeli-based Times of Israel, Republicans in the US House of Representatives have announced that elections would be held on June 19th to select a replacement for Cantor, who has stepped down as Majority Leader. 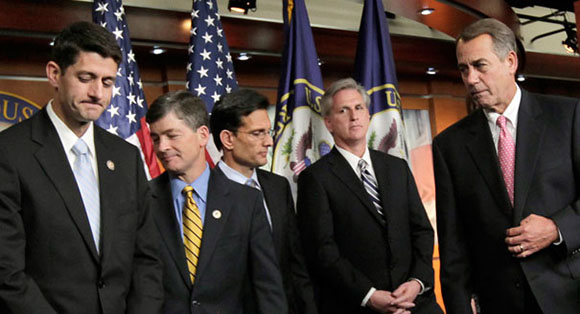 The Israeli newspaper—which, for obvious reason that the Jewish lobby runs Washington DC, feels itself well-qualified to comment authoritatively on internal American politics—went on to describe how their coreligionists have already set up fall–back candidates to replace their former point man Cantor:

“While Cantor’s departure means that there will be no Jewish Republicans in Congress, a number of those jockeying for a place among the House leadership have strong records on Israel-related topics,” the Times of Israel says, before going into a detailed discussion of the likely replacements:

“One likely candidate for Cantor’s position is the third-ranking Republican in the House, Majority Whip Kevin McCarthy (R-CA).

“McCarthy has issued a number of statements supporting Israel in recent years, and participated, alongside 80 other members of Congress in an AIPAC-sponsored trip to Israel in 2011.

A member of the House Republican Israel Caucus, Sessions addressed a Dallas meeting of AIPAC members in early May.

“The dark horse candidate for the position is fellow Texan Jeb Hensarling, the most conservative of the three candidates, and the closest ideologically to the Tea Party voters who ousted Cantor from his district.

“All three likely candidates are members of the House Republican Israel Caucus.”

Furthermore, the Times of Israel said, quoting a “source” at what it called a “pro-Israel organization” (we can guess who that is), “all three candidates for the position have strong pro-Israel records.”

And, just to reassure its Jewish readers that there is nothing really to worry about over Cantor’s unexpected defeat, the Times of Israel goes on to confirm the Jewish lobby’s stranglehold over Congress:

As if that was not enough, the Jewish Lobby has also lined up and primed all the slots below Speaker of the House as well, as the Times of Israel boasts:

“If McCarthy does, in fact, emerge as the best candidate for Cantor’s spot, it would also require replacing the third-ranking majority position in the House, the majority whip. Rep. Peter Roskam (R-IL), currently the fourth-ranking Republican in the House, is likely to campaign for that spot.

“Roskam’s presence in leadership would help to fill the legislative shoes left by Cantor. Roskam, a moderate Republican, is an extremely vocal and industrious legislator on Israel-related issues. In the past year, he introduced two bills on the subject – one that would block federal funding for universities which boycott Israel, and a second to increase US funding and partnership with Israel for missile defense programs.”

And the Anti-Defamation League still has the nerve to suggest that it is “false” for anyone to think that the Jewish Lobby controls the US government.

In reality, their control over the organs of government is even more complete and dramatic than that described in the Protocols of Zion.

Next Post Hear Dr. David Duke on the Red Terror, Jewish Tribalism and the US Congress