The United Nations special envoy for Syria says some 400,000 people have lost their lives as a result of more than five years of foreign-sponsored conflict gripping the Arab country.

Speaking on the sidelines of Syria peace talks in the Swiss city of Geneva on Friday, Staffan de Mistura said the figure was based on his “own analysis” and thus “not verified.”

He initially released the death toll in an interview with Swiss TV on Thursday.

De Mistura’s figures come while the UN has stopped officially counting the toll, citing lack of access to accurate data.

The UN envoy’s figure was close to a February calculation by the Syrian Center for Policy Research, which said the crisis in the Middle Eastern state has claimed the lives of over 470,000 people.
Click here for the full story

Russia has declared it will take “all necessary measures” against the US following the latest sabre rattling by the two world powers.

Moscow accused Washington of intimidation after a US naval destroyer in the Baltic Sea sailed close to its territory.

Russian ambassador to Nato, Alexander Grushko, said his country would not take such actions lightly.

Foreign leaders visiting King Salman of Saudi Arabia have noticed that there is a large flower display positioned just in front of where the 80-year-old monarch sits. On closer investigation, the visitors realised that the purpose of the flowers is to conceal a computer which acts as a teleprompter, enabling the King to appear capable of carrying on a coherent conversation about important issues.

One visiting US delegation meeting with King Salman recently observed a different method of convincing visitors – or at least television viewers watching the encounter – that he can deal with the escalating crises facing Saudi Arabia. The king did not look at the group but at a giant television screen hanging from the ceiling of the room on which was appearing prompts. Simon Henderson, the Saudi expert at the Washington Institute for Near East Policy, who tells the story, writes that off to one side in the room was an aide who “furiously hammered talking points into a keyboard”.

Number of Palestinian minors in Israel jails on rise: Report

The number of Palestinian minors held in Israeli prisons has reportedly seen a dramatic rise since the beginning of what observers call the third Palestinian Intifada (uprising) last October.

The number of minors in Israeli custody grew from 170 in September 2015 to 438 in January 2016, the Israeli newspaper Haaretz reported on Sunday, citing figures by the Israel Prison Service.

A 12-year-old girl is the youngest of the Palestinian teens incarcerated in Israel.

She was arrested in early February in possession of a knife outside the illegal settlement of Karmei Tzur, near West Bank city of al-Khalil (Hebron), and sentenced to four and a half months in prison.

However, the Palestinian child is set to be released later on Sunday at the request of her parents.
Click here for the full story

Did the Exodus really happen?

Archeological researchers find no evidence that the biblical Exodus as recounted in the Passover story happened, but rather the Egyptians ruled Israel during that period and that it was they who eventually left, though gradually.

Contrary to the biblical story that recounts the tale of the people of Israel leaving Egypt, the common view among mainstream archaeologists is precisely the opposite: the ancient Egyptians were the ones who ruled the land of Canaan, and they are the ones who left the Land of Israel to return to Egypt.
Prof. Israel Finkelstein of Tel Aviv University, an internationally renowned expert in biblical archaeology, explained the historical

background of the biblical Exodus story as revealed from archaeological excavations: “In the Late Bronze Age, from the 15th century to the 12th century BCE, Egypt dominated the Land of Israel. Of course, after 350 or 400 years of Egyptian rule in Israel, influences of Egyptian culture entered the Land of Israel in various areas of everyday life. Then two things happened that are related to that same issue: there was a complete collapse of urban centers and of kingdoms and empires in the ancient Middle East, and Egypt withdrew from Israel!” 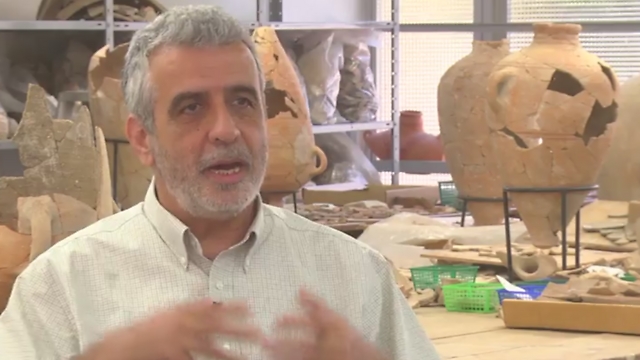 Based on the archaeological finds, the biblical Exodus story’s the time period, it was actually the Egyptians who ruled the Land of Israel. There is much material evidence scattered across the country. A prominent example of the Egyptian regime in Israel is the large Ramses fortress, the remains of which are hidden beneath the hilltop of Old Jaffa.
Click here for the full story

The AFD Party has published its platform, in which its intention to ban circumcision and halal and kosher slaughter is laid out.

A populist, right-wing political party in Germany has published its platform, in which its intention to ban circumcision and halal and kosher slaughter is laid out.
The AfD Party (Alternative for Germany, Alternative fÃ¼r Deutschland) has become one of Europe’s most talked about phenomena in recent months and has achieved unprecedented achievements in recent regional elections in the country.
Click here for the full story

Animals in the Chernobyl exclusion zone have not been wiped out by the nuclear fallout contaminating the land, but are actually thriving in the absence of humans, according to a new ecological study.

A series of explosions at the Chernobyl Nuclear Power Plant in 1984 set off a catastrophic chain of events that are still being felt today.

The power plant disaster remains one of the worst nuclear accidents on record, with the destruction of the facility’s reactor 4 on April 26 exposing large parts of the Ukraine and Belarus to harmful radiation.

A radiation sign is seen in the 30 km (19 miles) exclusion zone around the Chernobyl nuclear reactor in the abandoned village of Dronki, Belarus. Â© Vasily Fedosenko / Reuters

While most people were evacuated from the 4,300 square-kilometer area known as the Chernobyl Exclusion Zone, animals were left to forage in the highly radioactive environment.
Click here for the full story