A leading Australian newspaper’s political cartoon has been attacked as “antiSemitic” by Jewish organizations in that country—but it turns out that the cartoon was actually based on real events, an article in The New Observer has pointed out.

Jewish Supremacist pressure on Australia’s Sydney Morning Herald has forced that newspaper to issue a groveling apology and retraction for a cartoon which depicted a Jew sitting on a sofa, overlooking Gaza, and blowing up buildings with a remote control.

The “umbrella body of the Jewish community in Sydney,” the New South Wales Jewish Board of Deputies, accused the paper of “racially vilifying Jews.”

“In our view this is racial vilification, not only in the sense of offending, insulting, humiliating, and intimidating Jews as a group, but also in the sense of inciting third parties to hatred of Jews,” New south Wales Jewish Board of Deputies Yair Miller, was quoting as saying.

His opinion was backed by the “Anti-Defamation Commission of the B’nai B’rith” which also lodged a formal protest against the “anti-Semitic” image.

“This is the venomous propaganda of Der Stürmer recycled for a modern-day audience,” said commission chair Dr. Dvir Abramovich. “The cartoon portrays not just Israelis, but all Jews, as heartless, cold-blooded murderers.”

The cartoon does indeed appear to be “extreme” at first sight—until the reader realizes that it is actually based on fact.

As the Sydney Morning Herald apology dared to point out—and doubtless they will be punished for doing so—the cartoon “had its genesis in news photographs of men seated in chairs and lounges, observing the shelling of Gaza from the hills of Sderot. One of those photos depicted an old man, wearing a kippah, reclining casually as part of a group…” 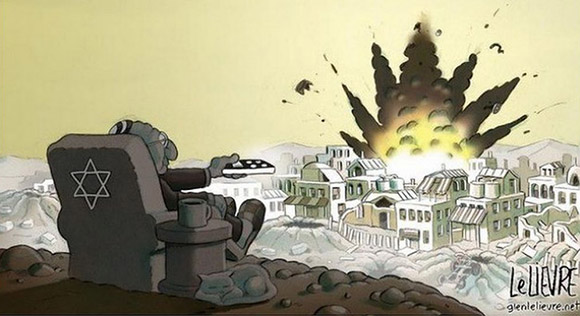 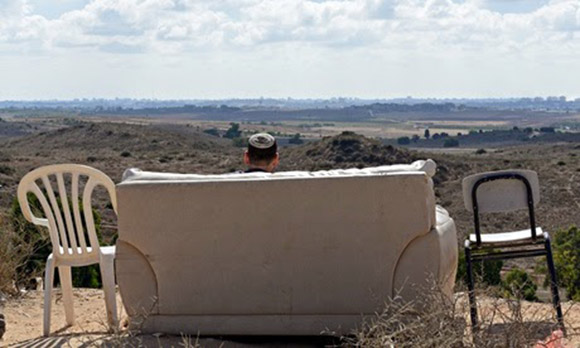 In fact, the shocking images of Jews lounging about on sofas watching their American-financed super weaponry bomb Palestinian babies, children, and women into dust under buildings, were very common and were so shocking and “extreme” that even the usually far-left Guardian newspaper in the UK produced an article on the topic.

Titled “Israelis gather on hillsides to watch and cheer as military drops bombs on Gaza,” the Guardian article reported that “people drink, snack, and pose for selfies against a background of explosions as Palestinian death toll mounts in ongoing offensive.” 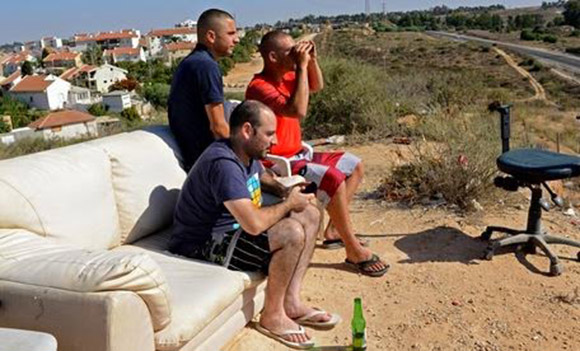 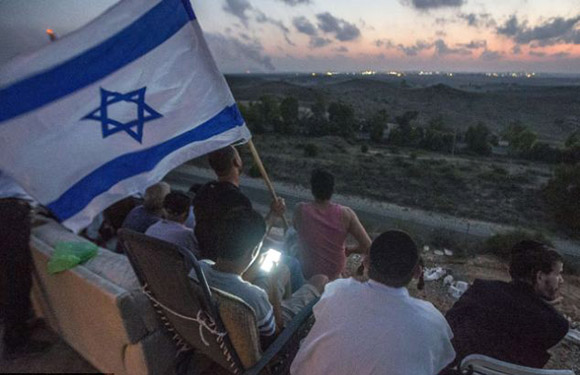 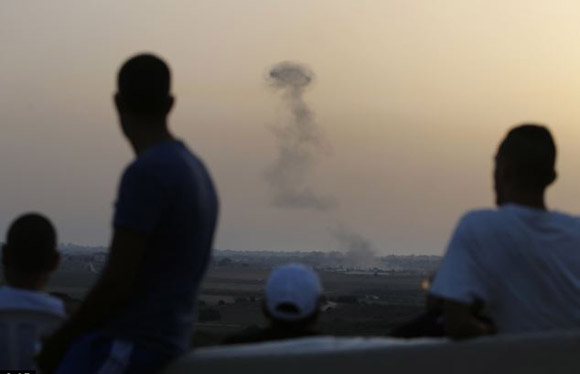 As the sun begins to sink over the Mediterranean, groups of Israelis gather each evening on hilltops close to the Gaza border to cheer, whoop, and whistle as bombs rain down on people in a hellish warzone a few miles away.

Old sofas, garden chairs, battered car seats, and upturned crates provide seating for the spectators. On one hilltop, a swing has been attached to the branches of a pine tree, allowing its occupant to sway gently in the breeze. Some bring bottles of beer or soft drinks and snacks.

On Saturday, a group of men huddle around a shisha pipe. Nearly all hold up smartphones to record the explosions or to pose grinning, perhaps with thumbs up, for selfies against a backdrop of black smoke.

The thud of shellfire, flash of an explosion and pall of smoke are greeted with exclamations of approval. “What a beauty,” says one appreciative spectator.

Given the dramatic views, media crews are coming to the area to cover the fighting. On a nearby hilltop, an ugly scene develops as a group of Israeli men threaten a photographer, accusing him of being a “leftist”. We are warned against asking for interviews, as another cheer goes up.

The Sydney Morning Herald’s cartoon was therefore, indeed shocking and extreme—but it was only a reflection of the reality of Israel.

It seems as if the truthful reflection in the mirror was too much for the New South Wales Jewish Board of Deputies and the Anti-Defamation Commission of the B’nai B’rith to bear.

* The cartoon appeared next to an article written by veteran Sydney Morning Herald columnist Mike Carlton in which he dared to criticize Israel for the mass murder and crimes committed by the Israeli Defense Force in Gaza.

Call it genocide, call it ethnic cleansing: the aim is to kill Arabs. As none other than Malcolm Fraser tweeted this week: “If any other country went to war killing as many civilians, women, and children, it would be named a war crime.”

His column provoked a predictable storm of protests and abuse from Jews in Australia—which persuaded his bosses at the Fairfax Media controled newspaper to sack him.

“I had overwhelming support from Herald readers, people saying ‘good on you’… but I think at the top of the Fairfax tree they were terrified,” Carlton said after his sacking.

Next Post Orthodox Jews: Part of the Solution or the Core of the Problem?