In a scene which could be straight out of the Protocols of the Learned Elders of Zion, one Jewish Supremacist, Janet Yellen, has sworn in another Jewish Supremacist, Stanley Fischer—an Israeli citizen—as a member of the Federal Reserve’s board, in anticipation of the latter’s appointment as vice chair of the Fed. 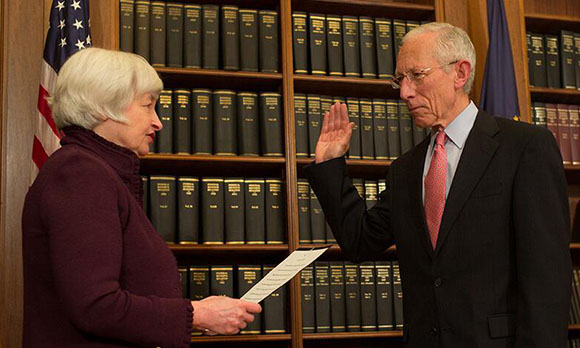 The ceremony, which could have been conducted in terms of Protocol number 20, took place at the central bank’s head office in Washington DC, according to an official statement.

Protocol No. 20 describes how Jewish bankers have taken over the financial systems of Western nations and manipulate them to their own advantage:

Economic crises have been produced by us for the goyim by no other means than the withdrawal of money from circulation. Huge capitals have stagnated, withdrawing money from States, which were constantly obliged to apply to those same stagnant capitals for loans. These loans burdened the finances of the State with the payment of interest and made them the bond slaves of these capitals.

Fischer is still awaiting confirmation by the U.S. Senate to serve as the central bank’s vice chairman.

Fischer is not only an Israeli citizen, but actually former head of the Bank of Israel from 2005 to 2013. A further indication of the internationalization of the Jewish banking elite can be seen from his background: 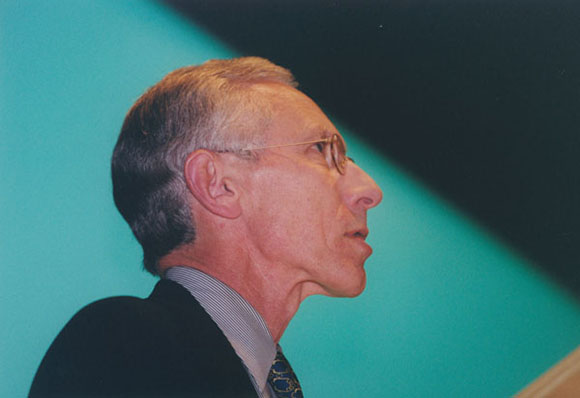 Fischer was born into a Jewish family in Mazabuka, Northern Rhodesia (now Zambia).

When he was 13, his family moved to Southern Rhodesia (nowZimbabwe), where he became active in the Habonim Zionist youth movement.

In 1960, he visited Israel as part of a winter program for youth leaders, and studied Hebrew at kibbutz Ma’agan Michael.  He became an American citizen in 1976.

From January 1988 to August 1990 he was Vice President, Development Economics and Chief Economist at the World Bank. He then became the First Deputy Managing Director of the International Monetary Fund (IMF), from September 1994 until the end of August 2001.

By the end of 2001, Fischer had joined the influential Washington-based financial advisory body, the Group of Thirty.

After leaving the IMF, he served as Vice Chairman of Citigroup, President of Citigroup International, and Head of the Public Sector Client Group. Fischer worked at Citigroup from February, 2002 to April, 2005.

Fischer was appointed Governor of the Bank of Israel in January 2005 by the Israeli cabinet, after being recommended by Prime Minister Ariel Sharon and Finance Minister Benjamin Netanyahu.

Fischer became an Israeli citizen but did not have to renounce his American citizenship, despite it being a pre-requisite for the job.

He had been involved in the past with the Bank of Israel, having served as an American government adviser to Israel’s economic stabilization program in 1985.

In June 2011, Fischer applied for the post of International Monetary Fund (IMF) managing director to replace the Jewish Dominique Strauss-Kahn, but was barred as the IMF stipulates that a new managing director must be no older than 65, and he was 67 at the time.

Every kind of loan proves infirmity in the State and a want of understanding of the rights of the State. Loans hang like a sword of Damocles over the heads of rulers, who, instead of taking from their subjects by a temporary tax, come begging with outstretched palm to our bankers.

While the Protocols are clearly an allegory— a literary device written in such a way as to present a real underlying truth—their predictive power in this regard has been reinforced with Fischer’s appointment to the board, which is the nucleus of U.S. monetary policy making.

My latest video The Illustrated Protocols of Zion show clearly how over the last few decades every Chairman and Vice-Chairman of the Federal Reserve Bank, the most powerful banking institution on Earth, have been dedicated Jewish tribalists who have supported Israel as well as international Jewish organizations serving the interests of the Jewish people.

To think that they would not use the incredible power of FED  over the currency and other markets of the whole world – to advance the interests of their fellow bankers and brethren would be the height of naivety.

Watch my video and pay close attention to the unbridled power of these Zio bankers who thumb their nose at even the elected government of the United States, the government and people they are supposed to serve. In reality they serve only their own interests and the perceived interests of their fellow Jewish elite.

Next Post Hear Dr. David Duke on the True Racists in the Modern World