Pre-commentary by Dr. David Duke — This excellent article by Dr. MacDonald could just as easily been titled: Jewish Pundits Don’t Reveal their Conflicts of Interest.

When a honest journalist reports on a controversial issue he should point out the bias of the advocate. For instance, if a reporter does a story about a study that supports the idea that artificial sweeteners pose no health risk, he would certainly reveal if the study was funded, organized and controlled by an artificial sweetener manufacturer.  This is vital information for the reader to know when he makes a decision about the veracity of the claims in the study.

Indeed the print and broadcast media of both America and Europe are full of Jewish “authorities” and “journalists” who are presented as unbiased experts when in fact they are extremely biased Israeli partisans.

A perfect example is of course, Wolf Blitzer of CNN. When he interviewed me from Tehran, Iran, I pointed out to his face that he is not an unbiased newsman but actually a life-long Zionist extremist who has actually been a lobbyist for AIPAC, the Zionist lobby in America. After I did that he quickly announced that “the satellite is going down,” and I have never been invited back since.

The article below centers of David Brooks, the lead columnist for the NY Times. It is never pointed out in the preface to Brook’s screeds on the Middle East, that Brook’s son is fighting in the Israeli Army. Certainly this is vital information before one reads his columns on Israel and the Palestinian conflict. He obviously has a very deep conflict of interest that readers should clearly understand. 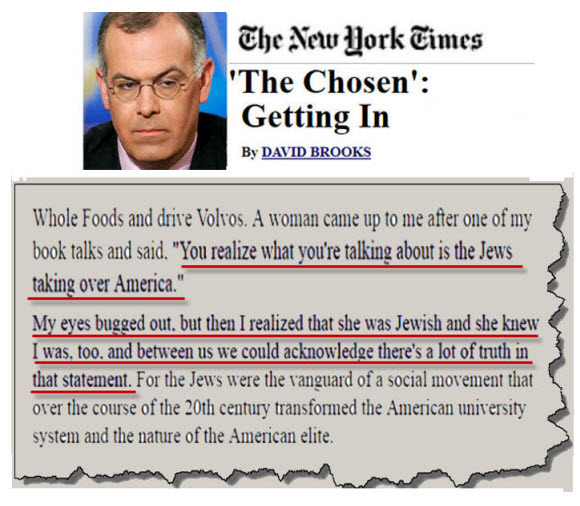 Brooks even and one time in supreme hubris casually boasted about “the Jewish takeover of America.” Yet, he is, like Wolf Blitzer and thousands of other Jewish radicals are simply presented as “authorities.” In the Jewish run media conglomerates they spout their lies to millions of unsuspecting Americans and people all over the world, such as the lies of “Iraq’s weapons of mass destruction” before the war for Israel in Iraq. Isn’t it time for disclaimers in newspapers and media exposing those who have a Jewish-Zionist agenda?

How can the public make good rational decisions about their views on these critical issues without a fair and unbiased presentation of the facts? 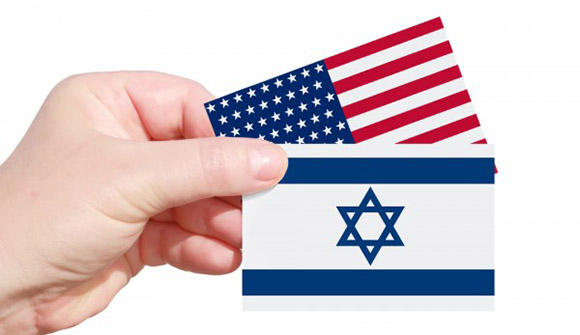 By Professor Kevin MacDonald — There was a time when the Jewish communities throughout the West were deeply concerned over charges of disloyalty. Prior to World War II in the U.S., England, and Germany there was the conflict between the older Jewish communities that were committed to some degree of cultural assimilation and the ideals of the Enlightenment, versus the Yiddish-speaking immigrants from Eastern Europe and their commitment to political radicalism, Zionism, and/or religious fundamentalism.

The older Jewish communities were concerned that Zionism would lead to anti-Semitism due to charges that Jews were more loyal to Jewish interests than to the interests of the country they lived in, and because Jews would be perceived as a nation and an ethnic group rather than simply as a religion.

As Jewish power has increased, however, these concerns have dissipated even as possible conflicts of interest over loyalty to Israel have increased exponentially — to the point that, as discussed by Steve Sailer, the NY Times’ David Brooks doesn’t feel the need to preface his comments related to Israel or the Israel Lobby by noting that one of his sons is a member of the IDF. (Love Sailer’s title: “Ethnic Extremist Leaves U.S. to Fight in Middle Eastern Tribal War.”)

Although Brooks’ son being in the IDF is certainly worth mentioning, there was never any doubt about Brooks’ strong attachment to Israel. The Hebrew-language interview with Brooks notes that

Brook’s connection to Israel was always strong … He has visited Israel almost every year since 1991, and over the past months the connection has grown even stronger, after his oldest son, aged 23, decided to join the Israel Defense Forces.

The same can be said for the legion of strongly identified Jews with access to the mainstream media and political process in the U.S, from the neocons who populated the State Department and Pentagon during the Bush years who have strong family ties to Israel (Paul Wolfowitz, David Wurmser), to media pundits like Jeffrey Goldberg who was and perhaps still is a member of the IDF. If it’s an ethical issue for Brooks, it surely is for Goldberg.

And even without close family in Israel, there are obvious questions of conflicts of interest simply because a strong Jewish identification. Neocons such as Charles Krauthammer or Richard Perle typically phrase their policy recommendations as aimed at benefiting the US. They do this despite evidence that they have strong Jewish identities and despite the fact that they have typical Jewish concerns, such as anti-Semitism, the Holocaust, and the welfare of Israel. Perle poses as an American patriot despite credible charges of spying for Israel, writing reports for Israeli think tanks and op-eds for the Jerusalem Post, and all the while having close personal relationships with Israeli leaders.

I would like to see our society engage in more social construction to get naturally conservative Jews like the Brookses to be more loyal to their fellow American citizens and less loyal to their foreign co-ethnics.

In particular, I favor criticism. Being criticized rationally for your poor behavior tends to encourage you to improve your behavior. But criticism of Jews for Jewish-typical failings such as excessive ethnocentrism is a career-killer today.

It’s like calling an angry black woman an angry black woman, except that angry black women tend to be more angry than powerful. In contrast, when Gregg Easterbrook wrote one sentence of criticism of Jewish movie moguls in 2003 in, of all places, Marty Peretz’s The New Republic, Easterbrook was immediately fired from his sportswriting job at Michael Eisner-controlled ESPN that accounted for half of his income. This is even though Easterbrook’s older brother Frank Easterbrook is a heavyweight federal judge. But nobody fears nepotistic vengeance by people named Easterbrook, while Eisner’s actions certainly served pour encourager les autres.

As I noted elsewhere,

In my ideal world, Jonah [and Jeffrey] Goldberg’s [and David Brooks’] op-eds and Paul Wolfowitz’s advice to presidents and defense secretaries should be accompanied by a disclaimer: “You should be cautious in following my advice or even believing what I say about Israel. Deception and manipulation are very common tactics in ethnic conflict, so that my pose as an American patriot should be taken with a grain of salt. And even if I am entirely sincere in what I say, the fact is that I have a deep psychological and ethnic commitment to Israel and Judaism. Psychologists have shown that this sort of deep commitment is likely to bias my perceptions of any policy that could possibly affect Israel even though I am not aware of it.”

As noted in The Culture of Critique, “many of the Jews involved in the [intellectual and political] movements reviewed here may sincerely believe that these movements are really divorced from specifically Jewish interests or are in the best interests of other groups as well as Jews. … But, as [evolutionary theorist Robert] Trivers (1985) notes, the best deceivers are those who are self-deceived.”

Next Post Dr. David Duke and Dr. Slattery Discuss How the Jewish Partisans Use Media to Control US!