Despite what US Secretary of State John Kerry has alleged, the US Intelligence assessment which he has produced as “proof” of the chemical weapons attack specifically says that there is no direct confirmation that the Syrian government was responsible, an analysis of the official documentation by the New Observer has shown.

According to that news source’s analysis, “In their frenzy to justify military action against Syria, the controlled media and Kerry have deliberately ignored the sentence in the “Intelligence Assessment” which contains  this very important caveat. 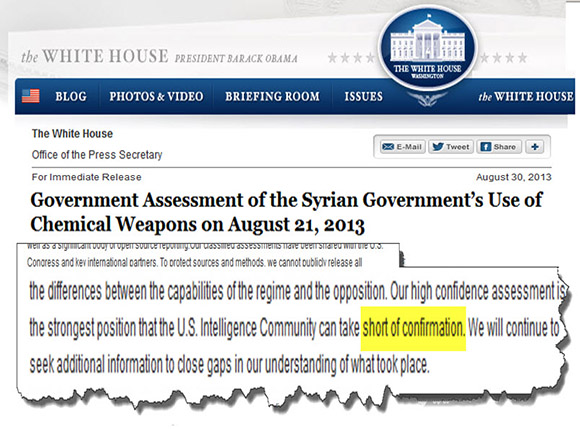 The analysis continued: While it could be due to sloppy journalism on the media’s part, this is unlikely, given that they all actively participated in the outrageous lies spread by the same Zionist-dominated neo-con war party which were used to “justify” the invasion of Iraq following the September 11 2001 attacks.

There is also no excuse for Kerry’s ignoring of this important caveat in the report—he is obviously pursuing a deliberate path to war in the same way as his predecessor Colin Powell deliberately lied before the United Nations over Iraq in 2003.

The “intelligence report” which Kerry has produced can be found in full on the White House website here, and it is directly from that source that the following quotes are taken.

The report starts out by saying, as the controlled media has repeatedly reported, that the “United States Government assesses with high confidence that the Syrian government carried out a chemical weapons attack in the Damascus suburbs on August 21, 2013.”

This belief, the report states, is based on “human, signals, and geospatial intelligence as well as a significant body of open source reporting.

“In addition to U.S. intelligence information, there are accounts from international and Syrian medical personnel; videos; witness accounts; thousands of social media reports from at least 12 different locations in the Damascus area; journalist accounts; and reports from highly credible nongovernmental organizations.”

In other words, the report says that the sources for the “intelligence” are:

2. “Human” intelligence—this is presumably from “sources” on the ground. In this regard, it is worth recalling that “human” intelligence, the infamous “Curveball” source, was the primary human intelligence source for Iraqi chemical weapons—and also shown to be outright lies.

There is therefore no particular reason to trust “human intelligence” reports of this nature, given the past history and the apparent bias of the reporting agents at work.

3. “Signals” intelligence—this is an obvious reference to the Israeli-supplied “intercept” of a Syrian message after the attack. Given that Israel and the Jewish lobby in both America and Britain have been vociferously biased against the Syrian government from the start and were also primarily responsible for the lies and blatantly forged “evidence” for Iraq’s “weapons of mass destruction,” this “intelligence” is also highly suspect.

The US intelligence report quoted by Kerry slyly acknowledges all of the above in its final summary assessment sentence which Kerry and the controlled media has chosen to ignore:

“Our high confidence assessment is the strongest position that the U.S. Intelligence Community can take short of confirmation. We will continue to seek additional information to close gaps in our understanding of what took place.”

In other words, the final assessment is that they do not have “confirmation” and that they are still trying to find out exactly what happened.

This is, of course, completely contrary to what Kerry has claimed—and it is an indictment upon the controlled media that they have failed to point this out.