The whole Alan Gross affairs has been bizarre from start to finish. Why was the government giving him six million dollars to provide Cuba’s tiny but privileged Jewish minoirty of less than 2000 internet access? (Most Cuban Jews went into exile in Florida back in the 1960s.) This represented almost a third of the USAID Cuba Program, which is aimed at “promoting democracy.” According to his Wikipedia page, when Gross was arrested

he was carrying a high-tech chip,[21] intended to keep satellite phone transmissions from being located within 250 miles (400 kilometres). The chip is not available on the open market. It is provided most frequently to the CIA and the Defense Department, but can also be obtained by the State Department, which oversees USAID. Asked how Gross obtained the card, a USAID spokesman said that the agency played no role in helping Gross acquire equipment.[20]

The following article will help unravel some of the mystery of how a Jewish businessman trying to enrich himself while undermining a foreign government could become the President’s “Guest of Honor” at Washington’s biggest annual power elite event. 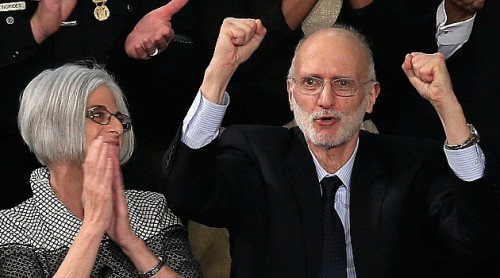 If you didn’t know anything about Alan Gross other than what you saw on television, you probably thought it was appropriate for him to sit next to First Lady Michelle Obama as a guest of honor at this year’s State of the Union address.

Television news reporting told the story of Gross as a humanitarian unjustly jailed in 2009 by a repressive Communist regime for the crime of bringing intent access to Cuba’s small Jewish community. His release from prison in December was part of President Obama’s plan to normalize diplomatic relations with Cuba after half a century of regime-change policy in the United States.

This TV news narrative had bipartisan support. In announcing his administration’s shift in Cuba policy, Obama said Gross “was arrested by Cuban authorities for simply helping ordinary Cubans.” Marco Rubio, the anticommunist Republican senator from Florida, said Gross was innocent of all charges against him and that he’d been “taken hostage” for “helping the Jewish community in Cuba have access to the internet.”

Neither was the case. He wasn’t “simply” helping ordinary Cubans. He wasn’t “taken hostage” and he was not “innocent” of breaking Cuban law.