Israel has started shipping African “refugees” out of the Jewish state and dumping them in Sweden—saying that Israel “cannot afford to absorb tens of thousands of Africans because it will affect the Jewish nature of the state,” according to a report by The New Observer.

The astonishing “agreement” to start shipping unwanted Africans from Israel to Sweden has been ignored by the controlled media, and news of it was only leaked in a small two-paragraph story on Ynetnews, the online English language Israeli news website of Yedioth Ahronoth, Israel’s most-read newspaper. 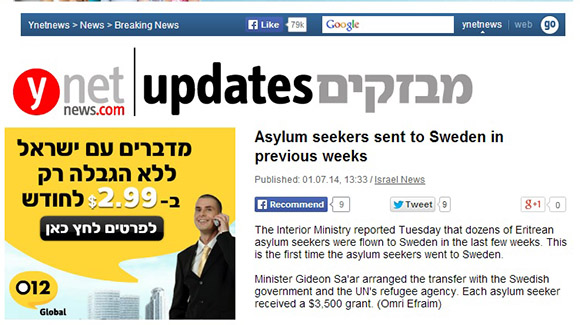 “Minister Gideon Sa’ar arranged the transfer with the Swedish government and the UN’s refugee agency. Each asylum seeker received a $3,500 grant,” the short article concluded.

The Jewish Supremacists also argue that having non-Jews in Israel “threatens the Jewish nature of the state.”

Israeli Prime Minister Binyamin Netanyahu warned in May 2012 that his country needed to prevent “illegal infiltrators flooding the country.

“If we don’t stop their entry, the problem that currently stands at 60,000 could grow to 600,000, and that threatens our existence as a Jewish and democratic state,” Netanyahu said.

In November 2012, Interior Minister Eli Yishai was quoted by Ynetnews as saying that the wholesale arrests of Africans in israel “are not meant to be against the infiltrators, but rather to preserve the nature of the Zionist Jewish state of Israel.”

Yishai added that the primary goal was “to return the infiltrators from Eritrea and south Sudan to their countries, despite the difficulties mounted by the so-called human rights groups.” 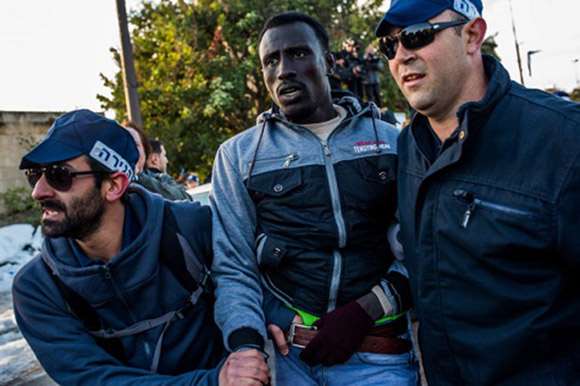 This hypocrisy over race is not something new—last year it was revealed that Israel had started using DNA tests on potential immigrants to make sure that they were racially of Jewish descent before letting them enter the Jewish state.

If any other nation on earth barred Jews based on DNA tests, these same Jews would be calling for war against that nation, crying “Nazism.” The Jewish Supremacists can however carry out such a policy without fear of censure—an indication of their control over the governments and media of the West.

The European Institute for Jewish Studies in Sweden, called Paideia, was also recently in the news when its founding director, the American Jewess Barbara Lerner Spectre, went on record in an Israel Broadcasting Authority video “The Jewish Community of Sweden” as saying that Jews had played a “leading role” in making Sweden “multicultural.”

In the documentary (video extract above), Spectre, who moved from America to Israel, and from there to Sweden(!), said, “I think there’s a resurgence of anti-Semitism because at this point in time Europe has not yet learned how to be multicultural, and I think we’re going be part of the throes of that transformation, which must take place.

“Europe is not going to be the monolithic societies [sic] that they once were in the last century. Jews are going to be at the center of that. It’s a huge transformation for Europe to make. They are now going into a multicultural mode, and Jews will be resented because of our leading role. But without that leading role, and without that transformation, Europe will not survive.”

Israel, of course, is making sure that it will not be multicultural—while its tribal agents such as Spectre all over the world do their best to ensure that everywhere else—and European nations in particular—are as mixed as possible.