Dr. Duke discussed problems of race and policing in America, pointing out the media practice of rushing to a judgment of police brutality and white racism. He noted that cases of whites being shot by police, even by black officers, receive little or no media attention. He pointed out that racial information about perpetrators of crimes is routinely suppressed, and that even when there are egregious cases of black on white murder it is never reported as racially motivated. 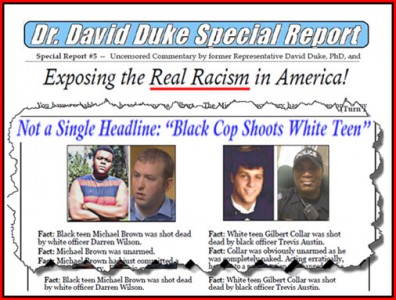 Dr. Slattery joined the program and pointed out that there are real race and policing problems, but that there actually are two sides to these issues and that if progress is going to be made on solving problems there is a need for all relevent information to be presented and discussed. He blasted the Zio media for presenting a one-sided narrative demonizing whites and police (except for Fox, which errs in the opposite direction), and contended that these media outlets are not motivated by a desire to solve problems but rather to inflame relations between the races and between police and the communities they work in. Dr. Duke noted that this is yet another example of the Zionist divide and conquer strategy.

This is a powerful show that has the power to penetrate minds that have been thoroughly washed by Zio detergent. Please share it widely!